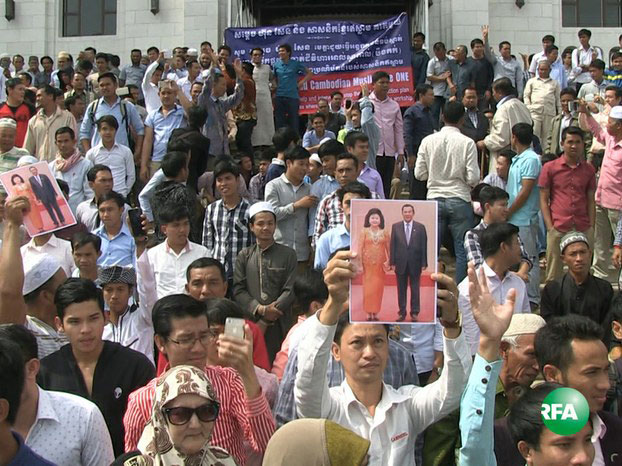 Cham Muslims hold up a photo of Cambodia's first couple as they protest a road project that could divide the property of the Al-Serkal Mosque in Phnom Penh, Dec. 30, 2016.
RFA

Hundreds of Cambodia’s Cham Muslims assembled on Friday at the Boeung Kak area’s Al-Serkal Mosque where the Phnom Penh city government plans to build a road that will divide the plot of land upon which the mosque sits.

The controversial plan for the road has sparked tensions within the Cham Muslim community, with many of the rank-and-file opposing the road and some of the Cham leadership supporting its construction.

The Al-Serkal Mosque, commonly called the Boeung Kak Mosque, is the country’s largest, and opponents of the road feel that it will destroy a tranquil oasis for the city’s Muslims.

Supporters contend that the road will ease traffic congestion and flooding because a new storm-water drainage system will be installed along with the road.

Ahmad Yahya, the Ministry of Social Affairs, Veterans and Youth Rehabilitation secretary of state, told RFA’s Khmer Service that he doesn’t oppose the road but thinks it should be moved.

He told RFA’s Khmer Service that the controversy over the road was being used to paint the Cham community as anti-government.

“They accused us of being an opposition group, but, as a matter of fact, we are not an opposition group,” he said.  “We just insist that the Phnom Penh municipality and the authorities divert the new road’s trajectory so it will not affect our mosque.”

Ahmed Yahya said his position in government and the open show of support by the demonstrators for Prime Minister Hun Sen and the ruling Cambodian People’s Party (CPP) should put the notion that they oppose the government to rest.

While the protestors disagreed with the Phnom Penh’s plans, they voiced their support for the CPP and held up banners saying the “Samdech Hun Sen and the Cham Muslims are one!”

Samdech is an honorary title bestowed by the Cambodian king that roughly translated to “lord” in English.

In 2010 Prime Minister Hun Sen inaugurated the mosque, which was privately funded by Al Serkal Family at a cost of $2.9 million.

On Dec. 23 hundreds of Cham Muslims demolished a temporary fence cutting across the mosque’s property that was installed on December 19 by the city workers to cordon off the road’s right-of-way.

Participants in that demolition included people from the Kratie and Tbaung Khmom provinces, where most Cambodian Cham Muslims live.

The new roadway is 200 meters long and measures 20 meters in width, with two meters for a sidewalk on each side.

The roadway is part of a plan to develop what was formerly Boeung Kak lake by Shukaku, Inc.

In what is considered one of Cambodia’s most egregious land grabs, 3,500 families were evicted from the Boeung Kak area and the lake was filled with sand.

The company is headed by powerful CPP Senator Lao Meng Khin and his wife Choeung Sopheap (aka Yeay Phu) and their family, according to a report by the London-based investigative non-governmental agency Global Witness.