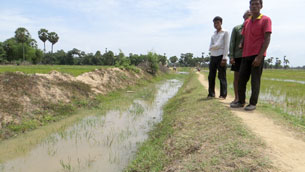 Rice farmers display the irrigation system in Khan Chor commune to which the CPP has refused access for nonmembers, Dec. 21, 2012.
RFA

Villagers in central Cambodia on Friday accused a local official who is a member of the country’s ruling party of discriminating against them because of their political views, saying he refused to allow them access to water critical to their rice crops during the dry season.

Residents of Khan Chor commune in Pursat province’s Kandieng district said that Cambodia People’s Party (CPP) official Samreth Chea had shut off the local irrigation system for 25 families who had voted for the political opposition, resulting in the withering of several hectares (1 hectare = 2.5 acres) of dry season rice.

Opposition Sam Rainsy Party member Chheng Ny, 41, said her dry season planting of around 1 hectare of rice would soon die because she lacks water to maintain it.

The rice farmer said that there is plenty of water in the irrigation system, but that Samreth Chea had told the villagers who belong to different political parties that it was “reserved for CPP members only.”

“He won’t allow us to pump water for my rice. Instead, he told me to ask for help from my affiliated party officials,” she said.

“He said I would have to defect to the ruling party before he would allow me to access the water for my rice. Now the rice will be destroyed.”

Another villager named Srey Ry, who belongs to the royalist Funcinpec Party, said he also stood to lose about 1 hectare of dry season rice because he was refused water by Samreth Chea.

“He is discriminating against me because of my political affiliation. He wouldn’t allow me to pump any water,” he said.

“He told me that he would only help the area’s CPP members.”

When asked about the villagers’ accusations, Samreth Chea confirmed that he had refused them water, saying that the irrigation system had been donated by the CPP and CPP members were using their own money to pay for the fuel needed to power it.

He said that other villagers could use the water if they agreed to help him defray the cost of the fuel and were careful not to reveal their political affiliation, to prevent him from getting in trouble with his party superiors.

“The irrigation system has water because the CPP is pumping it here, so villagers who are of a different political affiliation cannot use it,” Samreth Chea said.

“Villagers can use water from other resources, but this water belongs to the CPP.”

Eng Chhun Heang, a provincial official with the Cambodian rights group Adhoc, said the authorities should not discriminate against villagers because of their political beliefs.

“The authorities must find a way to help the villagers with their rice,” he said.

Eng Chhun Heang warned that the CPP stood to lose popularity because of the issue.

IF IT IS TRUE, THE CPP OFFICIAL SHOULD BE CHARGED UNDER THE ARTICLE 265 OR ARTICLE 266 OF THE PENAL CODE OF THE KINGDOM OF CAMBODIA.

The leader of CPP party, actual government of Cambodia lead by P.M Hun Sen, must be responsible and serve the people regardless which party they belong.

Almost 28 years in power, P.M. Hun Sen should get experiences how to lead, build the country. Show the people that you care, love, treat them well. Most of all he must show that it's not the ambition of getting power it's a matter of his competence, intelligence and honestly love the country and all cambodian people.

If this is true,it is completely crazy! Why just pumping the water is banned? Isn't the government the one who serve people? I doubt such official of CCP exist. Come one man! They are just Khmer like you!