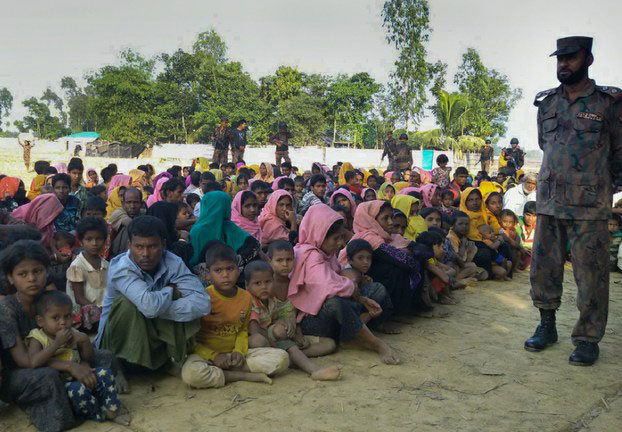 Bangladeshi border police in Teknaf watch over Rohingya Muslims who were detained after trying to cross into Bangladesh from Myanmar, Dec. 25, 2016.
AFP

Bangladesh’s foreign ministry on Thursday summoned Myanmar’s ambassador for the second time in five weeks to complain about Rohingya Muslims fleeing into Bangladesh, saying some 50,000 refugees had arrived since Oct. 9.

In his meeting with Ambassador U Myo Myint Than, Ahsan “expressed deep concern at the continued influx of Muslims from the Rakhine State of Myanmar” and said that “around 50,000 Myanmar citizens took shelter into Bangladesh since Oct. 9, 2016.”

“The Secretary (Bilateral & Consular) demanded early repatriation of [the] entire Myanmar population staying in Bangladesh,” the statement said, referring to hundreds of thousands of Rohingya who have sheltered in southeastern Cox’s Bazar district for years.

“He also requested the Myanmar government to urgently address the ‘root cause’ of the problem in the Rakhine State so that Rakhine Muslims are not required to desperately seek shelter across the border.”

The Rohingya are a stateless minority largely concentrated in western Myanmar’s Rakhine state. According to Bangladeshi government estimates, some 300,000 to 500,000 Rohingya refugees live in and around Cox’s Bazar.

Most have fled persecution at the hands of Myanmar’s Buddhist majority. Since early October, tens of thousands of Rohingya have crossed over from Rakhine amid deadly violence and a military crackdown that followed the killing of nine Burmese border guards in Muangdaw township.

When Ahsan first summoned the Burmese envoy on Nov. 23, he handed him a diplomatic letter conveying Bangladesh’s concerns over the influx. The local border police have tried to repel it by turning away hundreds of boats carrying Rohingya across the Naaf River that separates the neighboring countries.

The ministry also lodged a diplomatic protest over an alleged shooting incident in Bangladesh waters near Myanmar’s western coastline on Tuesday.

The statement alleged that the crew of a Burmese trawler fired on the F.V. Janiva Khaleda, then took the boat and the fishermen aboard it to a Myanmar navy ship patrolling nearby.

“Myanmar navy personnel seized the belongings of the fishermen and released them after 4 (four) hours. [The Secretary] demanded [an] appropriate investigation into the matter,” the ministry said, noting that four Bangladeshi fishermen “were seriously injured.”

The ambassador from Myanmar did not talk to reporters after Thursday’s meeting. It was not immediately clear whether officials in Naypyidaw, the capital of Myanmar, had responded to the incident or the summoning of their diplomat.

According to a high-ranking Bangladesh Navy officer stationed in the Chittagong region in the southeast, the shooting arose from competition over fishing grounds in Bay of Bengal waters around St. Martin’s Island, which belongs to Bangladesh.

“The incident happened over fishing; the Myanmar fishermen also go there for fishing. After we came to know about the incident, our Navy and Coast Guard went there for patrolling,” the officer told BenarNews, an RFA-affiliated online news service, on condition of anonymity.

Abdul Malek, a local fisherman, told BenarNews over the phone that many fishermen from Myanmar enter Bangladeshi waters to catch fish.

“Our navy should fire on them when they intrude in our waters,” he told BenarNews.

[A] one-sided interview setup from RFA. The Muslim lobby must be very happy for RFA participation in this echo chamber performance.

The usual propaganda piece is NOT working in 2017.

It is undeniable truth the so-called Rohinga aka Bengali originated from the near-at-hand Bengali land of over population and grinding poverty .

The government of Bangladesh are actually encouraging
Bangladeshi influx into Burma,
there is no doubt that the government looks upon this phenomenon with turning a blind eye
and makes no effort to prevent it.

On the other hand, certain intellectuals of Bangladesh have been propagating the concept of
"Lebensraum", a German word meaning "Living Space", for the exploding population of
Bangladesh.
There is no way to take back ‘Entire’ Rohingya Refugee Population.