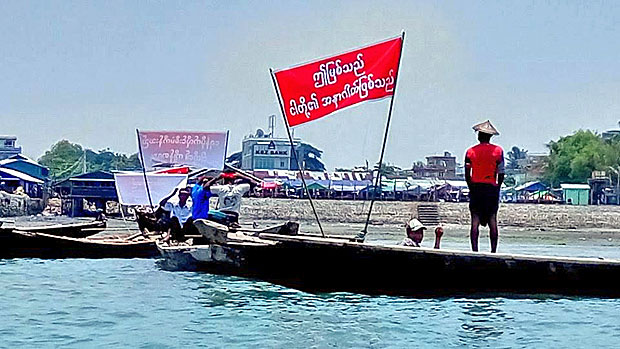 Myanmar fisherman protest the presence of Chinese oil tankers in waters off the port town of Kyaukphyu in western Myanmar's Rakhine state, May 22, 2017.
RFA

The rebel Arakan Army has indicated that it welcomes foreign investors, including Chinese investment in large-scale infrastructure projects under the massive Belt and Road Initiative (BRI), in western Myanmar’s underdeveloped and war-torn Rakhine state, where the ethnic force is fighting the national military for greater autonomy and self-determination.

The group’s political wing, the United League of Arakan (ULA), said in a statement on July 18 that it approved of governments and institutions that want to establish mutually beneficial projects such as the China-based deep sea port and Kyaukphyu Special Economic Zone under the BRI, a trillion-dollar infrastructure and investment program that encompasses parts of Asia, Europe, and Africa.

The ULA is “prepared to work hand in hand with the organizations and individuals working for multi-sectoral development,” the statement said.

“We also want to express our eagerness to extend a welcoming hand to those governments and organizations willing to invest in the Arakan state for mutual benefit and enterprise,” it said.

Myanmar signed a memorandum of understanding with China in September 2018 to create the China-Myanmar Economic Corridor, part of the BRI, under which the two countries agreed to collaborate on projects in several sectors. The roughly 1,000-mile corridor will link Kunming, capital of China’s Yunnan province, to Myanmar’s major economic hubs and to Rakhine’s Kyaukphyu Special Economic Zone, home to large Chinese oil-and-gas pipelines and the deep seaport project.

At the Belt and Road Forum in Beijing in April, Myanmar leader Aung San Suu Kyi signed two more memorandums and an agreement letter providing further details on their cooperation in the economic corridor.

Other Chinese projects in Myanmar, including a U.S. $3.6 billion hydropower project on the Irrawaddy River in Kachin state known as the Myitsone Dam, as well as factories and banana plantations, have sparked protests and other types of local resistance.

“There are many large-scale projects and companies working in Rakhine state,” said AA spokesman Khine Thukha. “The reason for making this announcement is to inform that we are ready to cooperate for all kinds of investments in the state which are not harmful to the public interest.”

Foreign investors have soured on Rakhine state due to global outrage over military-committed atrocities and the forced exodus of more than 740,000 Rohingya Muslims from the region following a brutal army-led crackdown in 2017.

The state has been further destabilized by clashes between the AA and Myanmar military, which intensified in late 2018 and in January after the rebel force carried out deadly attacks on police outposts.

In February, Aung San Suu Kyi made a rare visit to Rakhine where she addressed an investment fair and called for increased investment in the beleaguered region, saying that the international community had focused only on Rakhine’s negative aspects.

Khine Kaung San, head of the Sittwe-based development group Wan Latt Foundation, said officials should first secure peace and stability in Rakhine by including the AA in the country’s nationwide cease-fire agreement (NCA) before trying to woo back investors.

“Securing peace in Rakhine state and including the AA in the peace talks should be the first priority over welcoming investments,” he told RFA’s Myanmar Service. “The government should work on that. The international organizations should also support achieving that goal.”

“When we secure the nationwide cease-fire agreement, it should include the AA,” he said. “They should be included in the peace negotiations.”

The government has excluded the AA from peace talks to sign the NCA, which has been inked by 10 other ethnic armies, because of its ongoing hostilities with Myanmar forces.

Oo Hla Saw, an ethnic Rakhine lawmaker who represents Mrauk-U township in Myanmar’s lower house of parliament, had a different take on the ULA’s announcement.

Oo Hla Saw also indicated that the statement could be a sign of what may come in the future.

“The AA might be informing us about their policies in advance if they achieve self-governance or sign bilateral agreements with the government in the future,” he said.

RFA could not reach for comment Myanmar military spokesmen, the Chinese embassy in Myanmar, or the Myanmar Investment Commission, a government-appointed body that approves investment proposals about sector-specific developments.

Others said the AA's stance on additional Chinese investment in Rakhine state could benefit ordinary people who have had to give up their land to Chinese infrastructure projects but received little or nothing in return.

“There are Kyaukphyu residents whose lands have been confiscated by Chinese nationals, and they never have been properly compensated,” said Tun Aung Kyaw, secretary of the Arakan National Party (ANP), a political party representing the interests of the state's ethnic Rakhine population.

“We have very high hopes that the foreign investments in Rakhine state will improve regional development and the well-being of local residents,” he said. “But so far, we've gained nothing except for losing land and livelihoods.”

Tun Kyi, coordinator of the Kyaukphyu Rural Development Association, said locals would not object to the ULA's announcement because it includes their best interests.

“They [the AA] care about the local people's interest since they have conditioned their welcome message,” he said.

“Because they have garnered widespread support from the Rakhine population, people will not protest the AA's [political] ambitions or most of its decisions,” he said.

A week ago, Secretary of State Mike Pompeo barred the commanders and members of their immediate families from entering the U.S. because of their “responsibility for gross human rights violations, including in extrajudicial killings in northern Rakhine State, Burma, during the ethnic cleansing of Rohingya.”

“Of many authorities from many government institutions in the country, they picked the military leaders,” said Major General Tun Tun Nyi during a press conference in the capital Naypyidaw. “These military personnel are an inseparable part of the country and Union-level leaders.”

“The sanctions against these individuals amount to bullying a sovereign country, its people, the government, and the military itself,” he said. “I view this as interference in the domestic affairs of our country.”

The European Union and Canada placed travel restrictions and asset freezes on military commanders and others in 2018 for their roles in the 2017 crackdown on the Rohingya.

United Nations investigators, rights groups, and some nations say the campaign of violence amounted to ethnic cleansing, genocidal intent, or genocide itself, and have called for those responsible to be prosecuted by the International Criminal Court.

The Myanmar government has largely denied its troops committed atrocities against the ethnic and religious minority group.