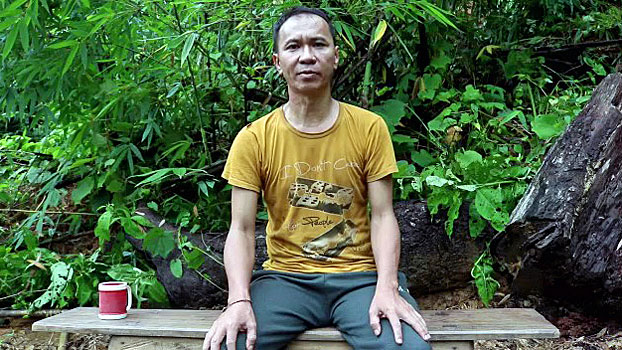 Zin Aung, an official from the government’s Land Records Department who has been detained by the Arakan Army for four months in western Myanmar’s Rakhine state, says he has been treated well by soldiers in a video issued on July 14, 2019.
Arakan Army video screenshot

The rebel Arakan Army (AA) issued a short video Sunday of a civilian it has held in captivity for four months following the siege of a national army outpost in Myanmar’s volatile western region, which a spokesman for government forces readily dismissed as a propaganda ploy.

The release of the video comes amid reports that Myanmar soldiers have tortured and killed civilians they have detained on suspicion of working with or supporting the AA, an ethnic Rakhine force that seeks greater autonomy in Rakhine state.

The AA said in an earlier report that it captured 11 men along with arms and ammunition after it overran a strategic hill controlled by the government army on March 9 near a village in Paletwa township of Chin state, abutting Rakhine state where hostilities have intensified between the two sides since late last year.

In the one-minute, 20-second video, Zin Aung, one of four people the AA is currently holding, says soldiers have been treating him well.

“Since I have been detained by Arakan Army, they have treated me like a family member and given me proper accommodations,” said the official from the government’s Land Records Department.

“They have given me the same food their soldiers have, and they have provided good medical treatment when I got sick,” he said. “I want to inform those concerned that I am safe and healthy, though I’m in the Arakan Army’s detention. Although I am a prisoner of war, the Arakan Army has not tortured me or ordered me to perform forced labor.”

Zin Aung also told his family in the video not to worry about him, and that he hoped the AA would release him soon.

RFA could not reach Zin Aung’s relatives for comment.

AA spokesman Khine Thukha told RFA’s Myanmar Service that the video was intended to inform Zin Aung’s family and the public that he has not been mistreated as a POW in line with the Geneva Conventions, post-World War II treaties that set international law standards for the humanitarian treatment  of prisoners and others during wartime.

“If they were POWs detained by the Myanmar military, they would have been subjected to many forms of torture,” he said. “They have committed several lawless killings.”

Khine Thukha noted that Myanmar soldiers executed by disembowelment an AA member captured in battle, adding that the ethnic army had photographic evidence of the crime.

“The Myanmar military has been acting inhumanely, but we don’t commit the same offenses,” he said. “When we capture POWs in battle, we follow the rules of the Geneva Conventions by treating them well and humanely.”

The AA earlier freed seven of the 11 men it detained in March who were civilians, but has continued to hold the other four, including Zin Aung, because they are from the Myanmar military’s engineering unit, Khine Thukha said.

The AA also denied a statement by a Myanmar military spokesman that it was holding more than 100 civilians.

Colonel Win Zaw Oo, spokesman for the military’s Western Command responsible for Rakhine state, dismissed the video as a publicity move by the AA.

“This is pure propaganda,” he told RFA.

He also denied that Myanmar troops have tortured civilians, though eyewitness reports and other evidence point to the contrary.

According to RFA's reporting, at least 15 civilians have died while in military or police custody or detention since March 2019 during the conflict.

“We only follow the procedures according to the law,” he said. “We have never committed any torture or similar violations.”

On July 12, the Myanmar military announced that it was forming an investigation team to probe some of the deaths of civilians held in custody during the army’s clearance operations against the AA, following reports of the deaths by RFA.

Win Zaw Oo estimated that the AA has detained about 140 individuals, including residents from Khamaungwa and Kintalin villages in Paletwa township, and that he had not heard any reports of them being released.

AA soldiers took away 76 displaced residents from Khamaungwa Village and 54 residents from Kintalin village following area clashes with government troops in January and February and took them to an AA outpost near the Indian border.

A Chin human rights organization later called on the AA to release the “abductees,” while some of those from Kintalin village managed to escape during the last week of June.

Khine Thukha said Arakan soldiers took the villagers away from a conflict zone for their safety, and that the army had earlier released some POWs through the International Committee of the Red Cross.

He added that the current detainees would be let go “at the right time.”

Khine Thukha told RFA that he could not disclose the exact number of POWs held by the AA because he had to confirm the figure with the army’s head office.