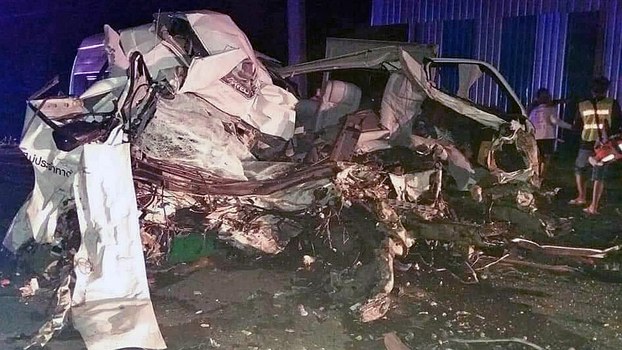 The wreckage of a van carrying Lao migrant workers lies in a heap after crashing into a tractor-trailer in eastern Thailand’s Sa Kaeo province, Aug. 18, 2019.

Photo courtesy of a citizen journalist

Ten undocumented Lao migrant workers were killed and three others were seriously injured in a head-on collision early Sunday in eastern Thailand’s Sa Kaeo province while traveling by van to Chanthaburi province on the border of Cambodia to renew their tourist visas, Thai police said.

The Thai van driver was also killed instantly, he said.

When Thai police questioned the truck driver, who sustained minor injuries in the crash, he described the events that led to the accident.

“The van had swerved and came into my lane,” the driver told police. “I couldn’t avoid it in time because it is a narrow road.”

Police suspect that the van driver had fallen asleep behind the wheel, he said.

The bodies of the dead, meanwhile, have been sent to a hospital in Bangkok, where only two have been claimed and taken away so far, the police officer said.

A family member of one of the dead told RFA on Tuesday that his relative, Livong, and Livong's wife, Bouakheua, who got married in 2018, went to Thailand three months ago on tourist visas, but then took jobs as construction workers. Bouakheua was also killed in the crash.

“They had to go to border checkpoint once a month in order to renew their visas,” the source said.

The family member said he talked to Thai authorities about taking Livong’s body back to Laos, but he must first wait until Bouakheua’s parents claim her body so they can be returned at the same time first.

The man also said that the couple was in process of legalizing their working status in Thailand.

The husband of another Lao worker killed in the accident told RFA that the van picked up his wife early Sunday.

“My wife told me that they wanted to get there early when the border gate opened, then come back home on the same day and go to work on Monday morning,” he said.

On Tuesday, Oukham Sengkeomixay, representative of the Lao Embassy in Thailand, thanked Thai authorities, police, and medical workers for providing assistance to the dead and injured Lao nationals.

Police Colonel Sompong Wongsisoonthorn, deputy police commander in Sa Kaeo province, issued a statement that police would quickly investigate the incident, ensure justice for all parties, and provide assistance to the dead and the injured.

Tens of thousands of impoverished Lao nationals have sought employment in neighboring Thailand where they receive much higher pay for low-skilled jobs in fishing, manufacturing, and construction than they would at home.

In the past few years, Thailand has developed a comprehensive legal framework to manage migrant laborers from neighboring countries through formal recruitment channels and by allowing those already working to formally register with Thailand’s Ministry of Labor.

Despite these measures, undocumented Laotians continue to enter the country on tourist visas to look for jobs, exposing themselves to unscrupulous employers who violate their rights or by middlemen who promise them well-paying jobs only to traffic them into slave-like labor conditions.