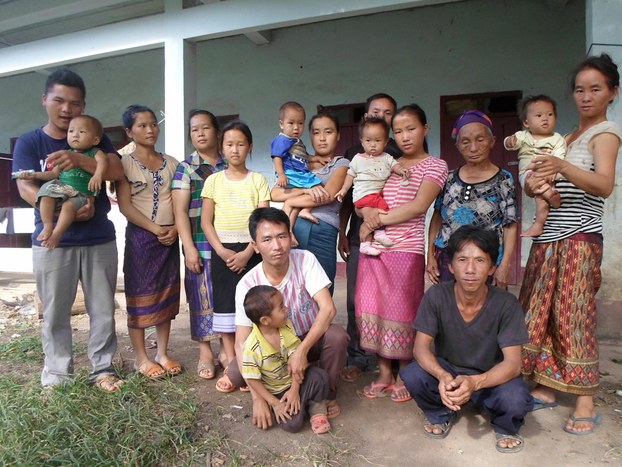 Christians from among six families who say they were forced to leave their village in Borikhamxay province, shown in an undated photo.

The European Union must pressure the Lao government to make “firm commitments” during bilateral human rights talks set for later this week in Vientiane, according to Paris-based rights group International Federation for Human Rights (FIDH).

The EU should demand assurances from Laos that it will improve its rights record during the 6th EU-Laos human rights dialogue set for Nov. 6, FIDH said in a joint statement released Tuesday in conjunction with its member organization Lao Movement for Human Rights (LMHR).

“It is imperative that the EU negotiates clear, measurable, and time-bound commitments with the Lao government and ensures their implementation,” FIDH President Karim Lahidji said in the statement.

“Otherwise, the human rights dialogue risks being a meaningless process that does not deliver any concrete results.”

Ahead of the dialogue, FIDH and LMHR released a joint briefing paper detailing a laundry list of human rights violations that have occurred in Laos since the previous round of talks in May last year.

Among them was the enacting of Decree 327—legislation the rights groups labeled “draconian” and said had been used to arbitrarily arrest and imprison people who have criticized the government or exposed corruption.

Authorities continued to crack down on religious minorities, such as Christians, while the government has failed to provide any updates on the investigation of the enforced disappearance of prominent civil society leader Sombath Somphone and has labeled allegations of other unresolved enforced disappearances as “not true.”

FIDH and LMHR said that since the previous round of talks, the space for Lao civil society to conduct human rights activities “remains non-existent,” adding that proposed regulations could further impose restrictions on the activities of local nonprofit associations and international nongovernmental organizations.

The groups noted that Laos, which will chair the Association of Southeast Asian Nations (ASEAN) in 2016, decided not to host next year’s ASEAN Peoples’ Forum/ASEAN Civil Society Conference that is traditionally held ahead of the annual ASEAN Summit, citing potential criticism by participants against governments in the region and inadequate resources.

Controversial infrastructure projects in the country risk impinging on the socio-economic rights of local communities, while reports of evictions without adequate compensation continue to surface, the statement said.

Additionally, it said, Lao courts have continued to impose death sentences on convicted criminals—mostly for drug-related offenses—and the government has delayed amendments to the Criminal Code that would limit capital punishment to the most serious crimes, in accordance with international standards.

The two groups called the failure of Laos to win a seat on the United Nations’ Human Rights Council last month a step in the right direction by the international community in recognizing the country’s poor rights record, but warned that more needs to be done to hold Vientiane accountable.

“The recent defeat of Laos in the U.N. Human Rights Council election shows that the international community has taken note of the government’s failure to make demonstrable progress on human rights,” LMHR President Vanida Thephsouvanh said.

“It is time for the EU to use its influence and demand that Laos comply with its international human rights obligations and implement the numerous recommendations it received during the Universal Periodic Review process.”

The Lao multi-ethnic people shouldn't let themselves intoxicated by the useless religious faiths. There is no F god and phi.