Floods Last Year Cause Rice Prices in Laos to Double. 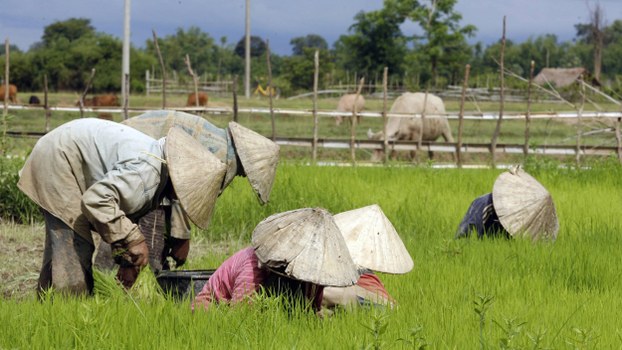 Lao farmers transplant rice on a field in Southwestern province of Khammoune, in a file photo.

The price of sticky rice is skyrocketing in Laos, in the wake of massive floods in one of the country’s most fertile regions and various other causes, amid rising prices of food in general due to the African swine flu epidemic that has ravaged China and Southeast Asia over the past year.

A rice trader from Vientiane Capital’s Xaysettha district told RFA’s Lao Service, “prices of rice have doubled. Sometimes it is even three times more expensive. A 12-kilogram bag of sticky rice in the capital is now $13, up from $7 late last year.”

Another trader confirmed the increase, saying, “[Prices] keep going up and up. Good quality rice is now more than $10 a bag, but rice from [neighboring] Vietnam is a little bit cheaper.”

Vietnamese rice and Lao sticky rice are quite different in taste and texture, to the point that switching from one to the other would be a major change for those used to one variety or the other.

“We’re so poor that we can’t afford to buy Lao rice because it is too expensive. We have to buy Vietnamese rice, which is sold for $8 a bag,” said a resident of the capital.

Price increases for one food can often affect those of other foods. A restaurant owner in the capital complained that the rice price hike is bad for business.

“We’re definitely not happy,” said the restauranteur, adding, “Once one product gets more expensive, the others will follow.”

The price hike is not limited only to areas that lost the rice crop to flooding.

For example, in Luangnamtha province, there was no flood last year, yet prices have risen for other reasons.

“The swine flu outbreak is pushing all the prices up especially for beef, fish and chicken, said an official of the provincial industry and trade department.

“We set a ceiling price but vendors are selling their goods at higher prices anyway,” the official said.

The official said that the price of a chicken used to be $7 about a month ago, but since the swine flu outbreak it is now $7.60 per bird. Other foods have also increased in price by about 70 cents.

But even though rice yields in some areas might have been normal, the price of rice is still rising there as demand in the country remains constant, while overall supply is low.

“Last year’s yield was very low because of the flood, so naturally, prices will rise,” said a Savannakhet provincial agriculture and forestry department official.

Another official in Bolikhamxay province provided a similar answer to RFA, saying, “Sticky rice is more expensive, from $1 per kilo to $1.20 per kilo. The cause is last year’s flood that led to a smaller yield.”

While officials in some provinces are quick to blame the floods for food price increases, those in other provinces acknowledge that other factors might be at play.

“We don’t know the exact cause of the high prices, but we know that prices are jumping up,” said an official in Xieng Khouang province, where the price of sticky rice has almost doubled.

“It could be the flood, or it could be that we rely on imports too much,” the official said.

Meanwhile, an official of Laos’ Industry and Trade Ministry explained, “Rice is more expensive this year.”

“We don’t know the cause yet, but I think it’s a combination of many factors including capital. Our department is discussing this problem and we may issue ceiling prices soon,” the official said.

Sticky rice of the same variety from neighboring Thailand has also increased in price due to Laos’ shortage.

A kilogram in Thailand’s Nongkhai Province is now $1.45, one third more expensive than two months ago, according to Thai media.

A resident of Vientiane Capital also blamed Laos’ dependency on trade with Thailand as a major cause for food price increases.

“Besides the flooding, the Thai baht is also up but the [Lao] kip is down,” the resident said.

“We import a lot of food, including [fruits and] vegetables from Thailand. The price of a lemon, for example, is now 30 cents, twice what it was just six months ago,” said the resident.

An employee of the Asia Development Bank in Vientiane Capital said that inflation would continue to weaken Laos’ beleaguered currency.

“Inflation of the kip will keep going up slightly through the end of this year,” said the bank employee.

“The devaluation of the kip is one cause, and the second cause is natural disasters, including last year’s flooding last year,” the banker said.

Regarding the value of the kip in regards to other currencies, the banker said the rates are now 288 kip to 1 baht and 8,700 kip per U.S. dollar. In the black market, however, the rate is 300 kip per baht and 9,000 kip per dollar.

Regardless of the secondary causes, however, the impact of the flood itself is undeniable according to an official of the Agriculture and Forestry Ministry.

“In addition, more than 60,000 hectares of farmland were destroyed by floods in Bolikhamxay, Khammouane, Savannakhet, and Champassak provinces last year,” the official said.

Next year, rice will likely be just as expensive, as almost all of the central and southern provinces of Laos are currently being flooded, possibly endangering next year’s rice yields.

Reported and Translated by RFA’s Lao Service. Written in English by Eugene Whong.

LAO GOVERNMENT is LAZY and do not know how to grow their own Foods for the country They are busy counting their Corrupts Dollars bills and Depend on THAILAND to Feed them like Baby
All their rice to eat are not enough to eat Because they use them to make ALCOHOL like BEER ETC..and complain Short of rice

There might be one way out. Let Lao people import fake rice from China.