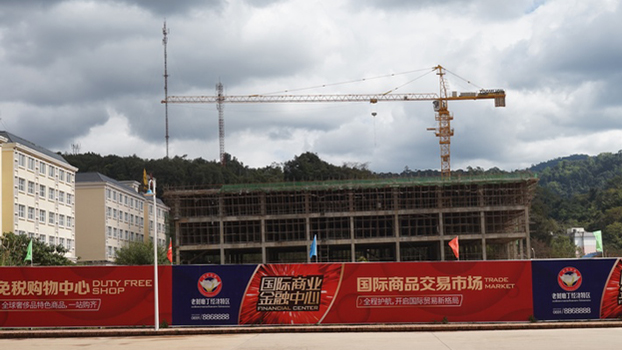 Chinese-backed hotels and shopping malls under construction in Boten in June 2018.
RFA photo

Laos’ Boten Specific Economic Zone (SEZ) is enjoying strong interest from Chinese investors as the Lao-China railway nears completion, but local villagers are fearful of the rapid change. They say that the development will be good for the Chinese, but not for the Laotians who currently live there.

Located in Luang Namtha province, the zone is adjacent to border town of Mohan in China’s Yunnan province. The Lao government expects that when work is completed and the railroad opens in 2021, millions of Chinese tourists will flock to the area.

“Every day more and more [Chinese] investors come to look for land to build a commercial district. Some are dividing lots for rent and others are setting up shops and restaurants,” said a Luang Namtha official in an interview with RFA’s Lao Service.

“Infrastructure such as roads, a power grid and public water facilities are being built and connected to the areas with the most interest in a bid to attract even more investors,” he said.

The official said 10 big corporations and many more small and mid-sized development groups are seeking to build up the zone with shopping malls, hotels, banks and other financial services, storage for merchandise, restaurants, a tourist services center and other shops to cater to the expected tide of tourists.

Once the railway complete, Boten will be the first stop in Laos coming from China. A Chinese contractor has been tapped to build a massive train station to accommodate the anticipated heavy flow of people and freight.

Late last month, Lao and Chinese officials marked the completion of boring and construction of the Boten tunnel, the first of 10 major tunnels under the Laos-China railway project.

“The completion will make Lao people confident that construction of the Laos-China Railway will be completed on time according to the plan,” said Khamsouk Bounnhavong, chairman of an inspection committee for the Lao side of the project in a report published by the official Vientiane Times newspaper.

The state-run daily quoted him as saying that the completion of the tunnel ahead of time for the Laos-China Railway project, which is part of the China-initiated Belt and Road Initiative, would encourage participants of the initiative’s second forum to be held later this month in Beijing.

For some recipient countries, the program has delivered infrastructure and connectivity to China. But it has also raised fears of excessive debt to Chinese banks in countries from Pakistan to Kenya.

There is concern among local residents in Laos that all the Chinese investment in the area not only will fail to generate local jobs, but also will put them out of business.

One villager who requested anonymity said that Chinese stores and restaurants tend to hire their own citizens rather than Laotians. The villager said that when the Chinese came into the area, rents increased fivefold, and land owners were more eager to do business with Chinese tenants because they could get higher rents and contracts for longer periods of time.

A local official from the labor department corroborated the villager’s claim, saying that Chinese prefer their own because of a language barrier. As most of the clientele comes from China, Chinese skills are necessary to communicate with customers.

The official further said that the five affected villages--Boten, BoPeak, TinXane, TinTok and NaTeu--are home to about 300 families of farmers and smalltime merchants selling their goods at the local market.

As those villagers cater more to the local community, it appears that they would have very little to gain by the buildup of the region, and are seen as a hindrance to development. Many have been resettled and given small compensation, but some refuse to move because they need land for farming.

The Boten SEZ is not the only target for Chinese investment. There are other zones along the future path of the railroad also getting much attention from Laos’ northern neighbors. But similarly, all the opportunity they are touting will go to Chinese workers, according to locals.

RFA sources report that the Chomphet SEZ in Luang Prabang province will use 4,500 hectares of land, but will also encroach on villagers. Meanwhile in the Vang Vieng tourist development zone, 22 villages were affected and 200 families in the Vientiane municipal economic zone near the rail station were displaced. These villagers rely on agriculture to make a living and the small compensation they are offered for their land makes many want to stay put.

Fears that the railway and its accompanying development will benefit Chinese at the expense of Laotians are not entirely unfounded. An analysis by a foreign expert, who requested anonymity, showed that Chinese investment along the rail route is more beneficial to the investors, especially when the Lao government lacks a concrete plan to elevate the standard of living for the Lao people through the development projects.

In Boten, Chinese investors have been granted a 50-year lease with the option to extend that lease for 25 additional years. The lease could have been potentially longer.

Under a previous version of the law on investment promotion, investors could be granted a 99-year concession but in 2016, an amendment capped leases at 50 years.

But there were those within the government that believe each SEZ should be considered by its own merits.

“The length of concession depends on what investments are part of an SEZ,” said a former Lao governmental official, speaking on the condition of anonymity.

“If the SEZ includes many factories that provide local employment, it is acceptable to give an investor a 99-year concession. But if not, even a 50-year concession is too long and makes the investment not worthwhile for the country.”

RFA’s Lao service sought comment from the Chinese developers involved at Boten, but got no response. The trade department and chamber of commerce in Luang Nam Tha declined to comment on the local concerns about the project.

Regardless of the exact amount of time each SEZ will be under Chinese control, there are those that see the large-scale investments as an ambitious plan to increase Chinese influence beyond Laos, into the entire Southeast Asian region.

One analysis of the railway’s impact on the region concluded that China’s presence will forever alter economics and politics in the area, with many more countries falling into “the trap of Chinese debt.”

Landlocked Laos expects the railway’s 420-kilometer (261-mile) route through the country to lower the cost of exports and consumer goods while boosting socioeconomic development in the impoverished nation of nearly 7 million people. It is part of a longer railway that will extend southward through the Malay peninsula to Singapore.

Millions of Chinese will flock into Laos and they'll never leave. You are a dead meat Laos.