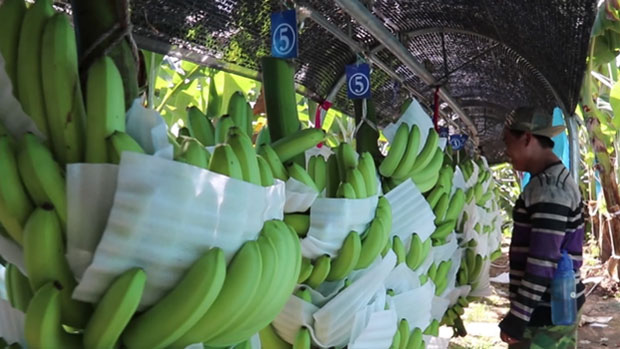 In this video screenshot, bananas in Laos are packed with foam prior to shipment.
Screen captured from lao44.org video

A Chinese-owned factory in Laos that recently started operations is causing noise and air pollution that affect the health of nearby residents in the country’s Bolikhamxay province.

The factory, which produces packing foam for use in transporting bananas, is made up of one building situated on a hectare of land in Bolikhamxay’s Paskanh district. More than ten households have reported that the factory is noisy and that they must endure awful smells when it is in operation between 6 a.m. and midnight.

“The Chinese factory is quite close to our communities. It smells like a gas burner, but very strong,” a resident of nearby Thong Ngai village told RFA’s Lao Service.

“The villagers feel so uneasy. It is unbearable. Many of us have sore noses and eyes and we can’t stand the constant noise either,” the source said.

The villager told RFA that the factory began operations on Oct. 10, but its owners did not have a permit from the district or the province. It has continued to operate every day since.

Village level authorities reported the issue to the provincial people’s assembly, but the issue has not been resolved. They now want the authorities to take action.

A provincial official from the planning and investment department told RFA that the factory’s owner did attempt to obtain permits for the factory, but the provincial authorities were against it.

“It would be too close to a dense community. The factory was supposed to be relocated to a new location, but it is still in the same place and [the owners] did not report to us,” the official said.

Another provincial official, from the natural resources and environment department told RFA that his department has been trying to stop the factory’s operations as long as they are nearby the village.

“We did not give them permission for this factory from the start,” the environmental official said.

“The business owner proceeded without our approval. We sent out a notice ordering him to choose a more suitable spot, because the current location is not suitable. It is too close to a community and it affects them,” the official added.

RFA was not able to reach the owners of the factory.

The official said the department will refer the matter to provincial authorities because a female worker was killed by plastic fumes.

“We think we will ask the provincial governor to take strict measures like cutting off power so they can’t continue operating,” the official said.

“Or they can bring the police in because there’s already been one death at the factory, so they need to take responsibility for it and shut it down,” he added.

Chinese are the owner of Laos. There is nothing the Lao people can do about it.

This is the Game of pointing finger back and forth and keep talking. This happened for long time and they keep talking repeating same thing over and over.
Don't you remember not long ago A lot of Animals were dead along the river Buffalos Cows Fishes floating and spoil beside the river after drinking Water from the river. These toxics can not be dumped in China land That's why they came here to open factory and dump these toxics here in Laos land. If you talk too much you may be ending in jail

They are not going to do anything because they have been bought. These 'leaders' are afraid of the Chinese and Vietnamese businesses but they treat the Lao people like trash.