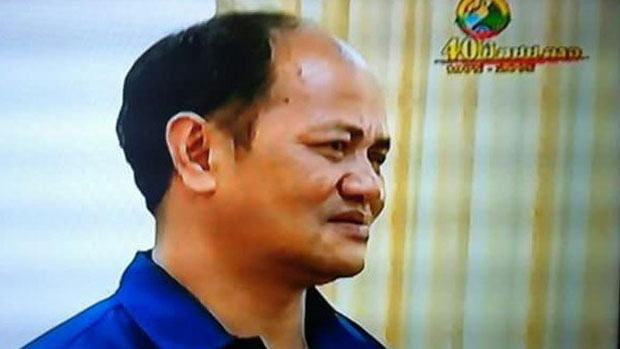 Screen grab from a televised report by the Ministry of Public Security shows Bounthanh Thammavong at the Vientiane Supreme Court.
Photo courtesy of Coffee News Desk

A Polish citizen of Lao heritage jailed in Laos in 2015 for criticizing the government on social media has been released by authorities in the Southeast Asian nation and returned to Poland after serving his full term, he told RFA’s Lao Service on Friday.

Bounthanh Thammavong, a 55-year-old democracy activist, was arrested in June 2015 on charges of “disseminating propaganda against the state” for Facebook posts criticizing the autocratic government in the one-party nation in which the ruling Lao People’s Revolutionary Party (LPRP) dominates politics, restricts civil liberties, and represses the domestic media.

Three months later, the Vientiane Supreme Court sentenced him to four years and nine months, but in 2017, the court reduced his sentence to four years.

The Polish embassy in Bangkok arranged for Bounthanh’s release with Lao authorities on Wednesday and returned him to Poland the same day, Bounthanh said by phone interview from Poland on Friday.

“I was released on the 19th and safely arrived home in Poland at 1 a.m. last night,” he said.

Bounthanh had been forced into exile from Laos and subsequently became a citizen of Poland, where he founded the Organization of Lao Students for Independence and Democracy in the 1990s.

He returned to the Southeast Asian country in 2010 to run a business dealing with foreign investment after receiving assurances from Lao officials that he would not face arrest on his return. He used to visit his Polish wife and two daughters twice a year in Poland before his arrest.

Bounthanh’s case was the first in Laos under which a person was sentenced to jail time following a government decree that went into effect in October 2014 prohibiting online criticism of the government and the ruling communist party and setting out stiff penalties for netizens and internet service providers who violate controls.

Following his arrest, his wife, Barbara Paklak-Thammavong, petitioned Poland’s Ministry of Foreign Affairs and Ministry of Justice to intervene in the matter by pressuring Laos for her husband’s release or for his transfer to a prison in the central European country.

Releases of political prisoners are rare in Laos, a one-party communist state since 1975.

There are no publicly available government figures on political prisoners in Laos, and the country’s opaque judicial system makes it hard to give a reliable estimate on how many are being held. Three were arrested in 2017 and charged with treason after protesting in front of the Lao embassy in neighboring Thailand.

The fate of about 10 other detainees, including students protesters arrested in 1999 and self-styled freedom fighters who launched a raid via a Thai border checkpoint in 2000 remains unclear.

Laos party-state is just only the name just like Pathet Laos in the Vietnam War era which were completely Vietnamese trained to speak Laos, but, it is intrinsically Vietnam communist branch.
Laos is a matter of times and by the year 2050, it will be one province of Vietnam.

This is the signal sent to Lao living abroad. The minute you arrive in Laos anything can happen to you. Never trust commies. Never and ever the Lao party-state will accept the truth. They will keep on lying until the day they die period.