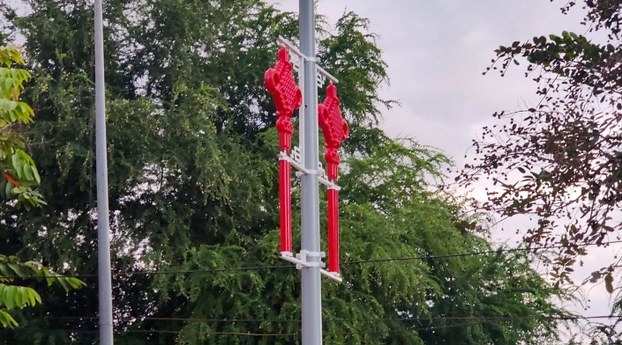 Decorations in the shape of traditional Chinese lanterns are shown on a lamppost in the Lao capital Vientiane.

Authorities in the Lao capital Vientiane have removed Chinese decorations hung on lampposts across the city, following a storm of complaints on social media from Lao citizens concerned over China’s growing influence in the country, sources in Laos say.

The decorations made to look like traditional Chinese lanterns were put up as part of a city improvement project funded by a Chinese government loan in 2018, with the work completed this year, an official of the Energy and Mines Department in Vientiane told RFA.

“We had a plan to beautify the streets of the city but had no money to carry it out,” the official said, speaking on condition of anonymity.

The decorations were removable, though, an official in the city’s Office for Management and Service said, adding, “They can be put up and taken down. They don’t come as part of the posts.”

All 300 sets of posts and the Chinese-style art were set up by a private Chinese firm along seven main roads in Vientiane in advance of an upcoming celebration of the Lao PDR [People’s Democratic Republic] Day on Dec. 2, sources said.

On Nov. 3, members of the Lao National Assembly Cultural Commission and other officials inspected the lampposts on one city street along the bank of the Mekong River and confirmed that their decorations had been taken down.

The display of Chinese cultural art on the city’s streets had angered many in Vientiane, with one capital resident concerned about China’s growing economic influence over its smaller southern neighbor telling RFA the installations had “symbolized the control of our country by the Chinese.”

“I want to see decorations made from Lao art, not Chinese,” another Vientiane resident said, adding, “Our culture and our arts have almost disappeared, and in the near future we won’t have anything left for our children to look up to.”

“Our cities and streets are going to look more like Chinese towns before very much longer,” he said.

“Laos is almost China now,” another city resident said in a posting on his Facebook page.

A Buddhist monk in Vientiane’s Ong Teu temple said that city authorities should have tried to explain the decorations’ purpose and told the public they were going up, saying for example that they could have been described as a symbol of cultural exchange.

“Or they could have installed Lao symbols on one post and Chinese symbols on the next, alternately.”

Laos, with ambitions to become “The Battery of Asia,” has drawn billions of dollars in Chinese investment in hydropower dams and other big-ticket projects under Beijing’s $1.3 trillion Belt and Road Initiative to build infrastructure and support trade.

China is Laos’ largest foreign investor and aid provider, and its second-largest trade partner after Thailand.