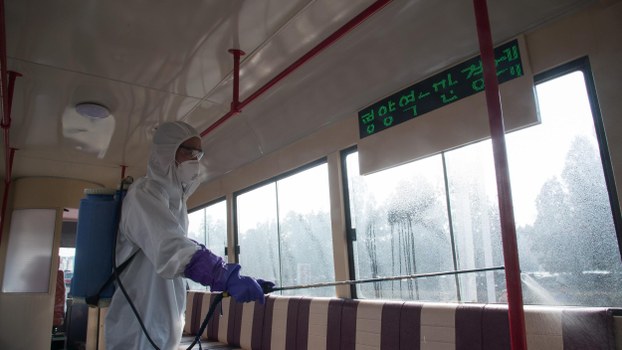 An official from the Mangyongdae District emergency anti-epidemic headquarters disinfects a tramcar to prevent the spread of the COVID-19 coronavirus, at the Songsan Tram Station in Pyongyang on February 26, 2020.

An entire island county in North Korea’s North Pyongan Province was designated as a quarantine zone last week, after residents there began exhibiting signs of coronavirus infection, RFA has learned.

Although North Korea has yet to report a confirmed case of COVID-19, state media Sunday said nearly 7,000 people were being held for “medical monitoring” between North Pyongan, South Pyongan, and Kangwon provinces.

The government has also in recent weeks taken aggressive precautions to prevent its spread within the country, including the cancellation of major festivals.

The quarantine was imposed in Shindo county, an island at the mouth of the Yalu river located at the westernmost edge of the Sino-Korean land border. Sources say it is a high-risk area because it is frequently used by smugglers to get in and out of China easily.

“A group of suspected new coronavirus cases occurred in Shindo county, North Pyongan province, near Donggang, China, so the area was completely quarantined on Feb. 25,” a resident of nearby Ryongchon county told RFA’s Korean Service.

“Soldiers and residents are not allowed to go out to sea or to travel inland. There are border guards there to block people from other areas entering the island,” the source said.

The closing of Shindo is not the first time North Korea designated a large area as a quarantine zone.

“Authorities first sealed the border areas of Sinuiju and Ryongchon county here in North Pyongan, back on Feb. 10 when there were a few suspected cases of coronavirus,” the source said.

“They designated Yomju county as a quarantine zone a few days later,” said the source.

The source said that the COVID-19 cases in Shindo have origins with Chinese smugglers.

“The first suspected case is known to be a man who came in contact with a Chinese smuggler, but his family doesn’t even know where he is being treated,” said the source.

To enforce the quarantine, the government has sent security forces to the area.

“The national emergency quarantine committee stationed border guards from outside of Shindo in response,” the source said.

“There is also a battalion of soldiers stationed there, and they are guarding the border guard posts. But each company and platoon of soldiers are themselves prohibited from leaving,” the source added.

The source said that local residents are also prohibited from approaching military units to sell goods, which under normal circumstances would happen quite often in Shindo.

The coronavirus scare has also had a profound effect on the smuggling industry in Shindo.

“Shindo is less than a kilometer from Donggang, China, and border security has been tightened to prevent Chinese smuggling boats from approaching,” the source said.

“It is the first time that our side has controlled and completely blocked Chinese smuggling boats.”

A second source from the same province said that even though the island is in quarantine, the government is still expecting farmers to work in areas where smugglers frequent, without even giving them facemasks.

Washington-based North Korea experts told RFA that the admission in state media reports that there were a large number of possible COVID-19 cases being monitored is probably a solid indication that the virus has already entered North Korea.

“It seems as though North Korea is still downplaying the virus to an extent, but with the virus spreading to more countries around the world it may be politically easier for the regime to acknowledge the coronavirus’ presence in North Korea,” Troy Stangarone of the Korea Economic Institute told RFA.

“Given the coronavirus’ outbreak in China and the cross border trade and tourism between the two countries, it seems unlikely that there would be no infections in North Korea. However, due to the closed nature of North Korea it is difficult to know how widely the virus has spread,” he added.

Bruce Klingner, a senior fellow at the Heritage Foundation, told RFA that the announcement is a “grudging recognition” that COVID-19 has entered North Korea.

“Pyongyang appears to projecting an aura of control while still claiming there have been no actual cases of the disease,” said Klingner, who added that North Korea is ill-equipped to handle the disease.

“Much of North Korea's populace is emaciated, weak, and quite vulnerable to virus. The country's dilapidated medical system and shortage of medicine would compound the effects of an outbreak,” he said.

Regarding that vulnerability, the Quincy Institute’s Jessica Lee told RFA, “Given North Korea’s proximity to China and South Korea, where the coronavirus epidemics are concentrated, the international community is right to be concerned about North Korea’s ability to handle this virus.”

She called for a reevaluation of how sanctions on North Korea affect its healthcare system.

“Isolating and sanctioning North Korea without any regard for the impact on the healthcare system of the North Korean people has proven to be highly risky,” she said.

“After this ordeal has ended, a public debate on the impact of U.S. and U.N. sanctions on the North Korean healthcare system is in order, as the status quo clearly is not serving U.S. national security interests,” she added.

On Thursday, the United Nations Security Council approved an exemption requested by the World Health Organization to allow diagnostic and medical equipment to  be transported into North Korea to assist the government with any coronavirus outbreak. 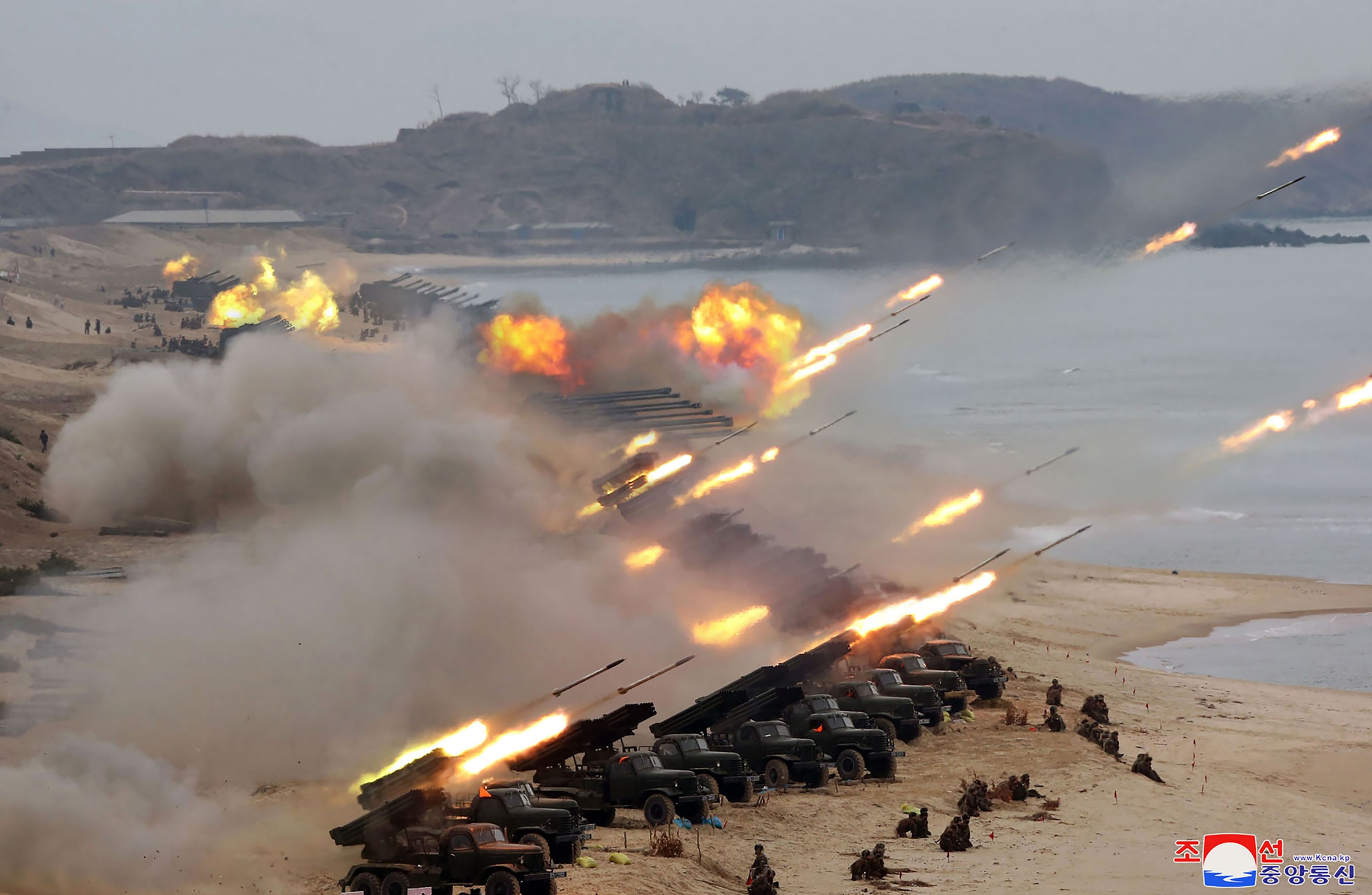 North Korea launched two short-range projectiles in waters to the east of the peninsula Monday as part of what South Korean officials said was a military drill that began Friday.

Several South Korea-based experts told RFA that the launches might be related to the coronavirus’ spread in North Korea.

“If the disease spread, they would have to ask the international community (for help) and say they did their best,” said Choi Jeong-hoon, a professor at Korea University.

Choi said that North Korea might connect any international aid to the projectile launches in order to project the effectiveness of provocations domestically.

But Professor Park Won Gon of Handong University pointed out that the provocation might make the international community less enthusiastic about sending aid to North Korea in the event of an outbreak.

“Overall, North Korea is in no position to make such a provocation. With China and South Korea struggling with the new coronavirus now, provocation would reduce the number of countries that would support North Korea and worsen international opinion,” he said.

Mark Fitzpatrick of the International Institute for Strategic Studies said the launches were probably part of military exercises as claimed by Pyongyang, but might have also been a political message aimed both inside and outside of the country.

“One audience is the North Korean public, which might need reassurance that the authorities are following up on Kim Jong Un's year-end message about developing strategic weapons and also reassurance that the coronavirus is not impeding defense readiness.  There is probably an intention to send the same message to the Republic of Korea and to the United States,” he said