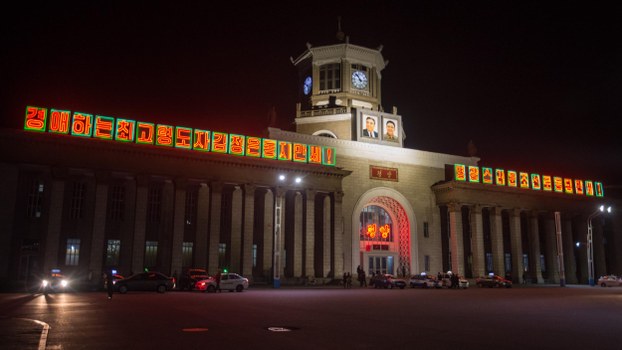 A photo taken on May 4, 2018 shows a general view of the central railway station in Pyongyang.

Authorities in North Korea have isolated about 1,300 residents in a makeshift quarantine station at a hotel in the capital Pyongyang, as worries about the possible spread of the novel coronavirus intensify in the isolated country.

Named in honor of the April 25, 1932 foundation of the Korean People’s Revolutionary Army, the 4.25 Hotel has a capacity of 20,000. Sources say that the focus on Pyongyang is disproportionate to the rest of the country as the country’s leadership seeks to protect itself from the virus, also known as COVID-19.

“Those who cough or have a fever are classified as suspected coronavirus patients,” a Pyongyang official told RFA’s Korean Service Saturday.

“The suspected patients will be closely monitored by the emergency quarantine committee of Pyongyang over the next 20 days,” the official said.

“Currently the number of suspected patients is around 1,300. Another 500 have already been discharged because their symptoms have eased,” the official added.

“[They] are either quarantined in solitary rooms or shared rooms, depending on [the severity] of their symptoms. They are receiving medical treatment from those doctors at the Ministry of Public Health, who are a part of Pyongyang’s emergency quarantine committee,” said the official.

Pyongyang is the priority

According to the official, the extreme quarantine measure is part of a national strategy, of which protecting the city of Pyongyang is vital.

“The authorities declared the new coronavirus quarantine as a matter of national survival, so they are focusing their efforts on protecting Pyongyang, where the supreme leadership of the government is located,” the official said.

“The central government has been generously supplying quarantine suits, medical equipment and medicine to the 4.25 Hotel,” the official added.

The response to the COVID-19 epidemic in the provinces has been different.

RFA reported Friday that a hospital in Chongjin, the largest city in North Hamgyong province cremated 12 patients, claiming they had died of pneumonia or the flu. Residents near the hospital suspect that the 12 might have actually been infected with the coronavirus even though North Korea has not officially reported a single confirmed case.

Many, including South Korean media outlets, have said that it is unlikely that the virus has failed to reach North Korea.

A second source in Pyongyang told RFA that the emergency quarantine has been kicked into high-gear as reports of deaths due to secondary infections trickle in daily from China to the Central Committee (of the Korean Workers’ Party).

“Pyongyang residents with the symptoms of pneumonia are put in isolation along with anyone they or their families have had contact with,” the source said.

“Workers at the emergency quarantine committee are asking for two reports each day about the numbers of residents suffering from infectious diseases in each district. They also set up a hotline for Pyongyang residents to voluntarily report their symptoms to each district hospital,” the source added.

But despite all the city’s efforts, the source said Pyongyang was ill-equipped for a potential epidemic.

“In February, the city supplied free masks to citizens twice, but they don’t have enough quarantine equipment, medicine or medical facilities.”