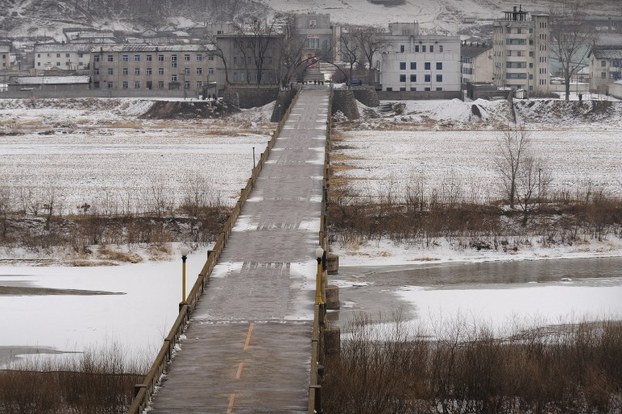 The town of Namyang in North Korea's North Hamgyong province is seen across the Tumen River from the town of Tumen in China's Jilin province, in a file photo.

Authorities in North Korea are offering a variety of incentives, including increased food rations and Workers’ Party membership, to informants on would-be defectors and smugglers who try to cross the frozen Tumen River into China during the lean months of the winter season, according to sources.

A source who resides in North Korea’s North Hamgyong province which, along with Yanggang province, shares the river border with China’s Jilin province, said the rewards appear to have been ordered by the Kim Jong Un regime as part of a bid to prevent people from fleeing the country.

“As the ice of the Tumen River has not melted yet, a unit of the State Security Department (SSD) which was deployed to crack down on defectors during the winter has not been withdrawn,” the source told RFA’s Korean Service Tuesday, speaking on condition of anonymity.

“The SSD is cracking down hard on asylum seekers and smugglers, and it has promised incredible rewards to anyone who fingers defectors or smugglers,” the source said.

According to the source, a member of the SSD recently attended a farmer’s meeting in the Saegol district of North Hamgyong’s Musan county and pledged that anyone who reported a defector or smuggler more than four times would be granted membership to the Workers’ Party and promoted as headman of a local community.

With the promise of the many opportunities that come with party membership, several farmers have been on constant lookout for anyone approaching the riverside and notifying area soldiers, the source said.

The SSD has also organized patrols made up of youth whose orders are to “keep a strict watch for strangers” entering border towns, with the possibility they might try to cross the Tumen.

A North Korean defector living in the U.S., who is in frequent contact with her family in Yanggang province, confirmed that authorities in the area had offered rewards for snitching on defectors.

“SSD members around the border areas have promised to raise the percentage of food distribution to farmers who inform on defectors,” she said.

The Kim regime has also granted border guards the privilege of joining the Workers’ Party if they are able to catch would-be defectors, according to an official from a rights group that has taken in people fleeing North Korea in recent years.

Both border guards and members of the SSD stand to earn substantial money in bribes for helping other North Koreans defect, but the incentives have created an atmosphere of paranoia where everyone is closely watching one another, the rights official said.

He said that the incentives have also driven up the price of bribes required to seek assistance from soldiers or members of the SSD to illegally cross the border.

“Soldiers [and members of the SSD] are at risk of being shot to death or sent to jail, so now they demand very high prices for help in crossing the river,” the official said.

According to South Korea’s Ministry of Unification, the number of defectors fleeing North Korea to the South has decreased dramatically since Kim Jong Un took power, following the death of his father and predecessor Kim Jong Il from a heart attack in December 2011.

In July 2013, sources told RFA that North Korea had been more frequently changing the guards posted along its border with China in order to prevent corruption, making it harder for would-be defectors to escape.

A month earlier, sources told RFA that Chinese authorities had installed miles of barbed-wire fencing along the Tumen River in a bid to maintain “order in the border areas,” amid official concerns over drug smuggling, human trafficking, and possible “accidents and incidents” involving North Korean soldiers.

They said the move had also strongly discouraged would-be defectors from crossing into China in areas where the fences had been built.