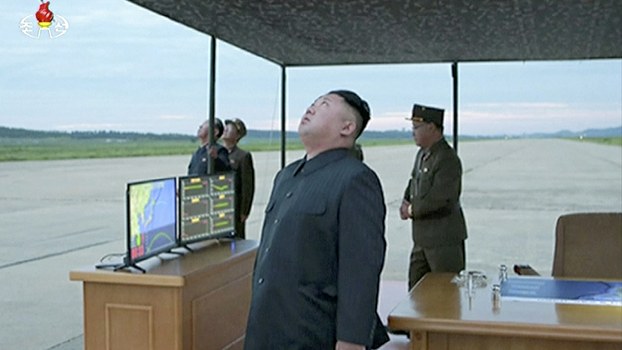 Kim Jong Un looks up at the sky at what is said to have been a missile launch on Aug. 29, 2017 from an undisclosed location in North Korea, in an image made from a video of a news bulletin aired by North Korean government broadcaster KRT.

A critical slush fund controlled by North Korea’s leader Kim Jong Un is nearly depleted following a series of nuclear weapon and missile tests, and the nation’s decision to participate in the upcoming Winter Olympic Games is part of a plot to bolster its failing economy, according to sources.

Two Chinese sources with connections to North Korea’s ruling elite told RFA’s Korean Service Wednesday that Kim—now in his seventh year of leading the North—has nearly exhausted the slush fund he inherited from his predecessor and no longer has enough money to govern the country.

“Due to Kim Jong Un’s extravagant spending, the slush fund from his father, Kim Jong Il, is running out,” said one of the sources, speaking on condition of anonymity.

“It won’t be easy to control North Korea’s high-level executives, who are [cunning] like raccoons.”

The source said that he is “well-acquainted” with executives from Office No. 39—a secretive organization under the ruling North Korean Workers’ Party that works to provide an estimated U.S. $500 million to U.S. $1 billion in funds annually to the country’s leadership through a number of illicit activities, including counterfeiting, drug production, and international insurance fraud.

“I heard them worrying about insufficient funds in Office No. 39 a number of times,” he said, adding that “high-level North Korean executives are aware of it, so it is not a secret among them.”

The source noted that four out of six of North Korea’s nuclear weapons tests, and missile tests conducted on nearly 20 occasions, have taken place during Kim Jong Un’s leadership.

“We can speculate that he spent a lot of money from the number of missile [and nuclear weapons] tests he carried out,” he said.

“Most of the funding for nuclear weapon and missile development is coming from Kim Jong Un’s slush fund.”

In addition to expenditures on weapons tests, the source said that Kim has also spent lavishly from the fund on showpiece projects such as the Ryomyong Street neighborhood in the capital Pyongyang and the Masikryong Ski Resort in eastern North Korea’s Kangwon province, as well as on his “on-the-spot guidance tours” of different industries that are used as propaganda by state media.

But international sanctions leveled at North Korea in response to its nuclear weapons program have increasingly cut off access to foreign currency for a country already facing economic difficulties.

The source told RFA that the latest measures had dealt Pyongyang a serious financial blow. According to a U.N. estimate from September, around 100,000 North Koreans working abroad send some U.S. $500 million in earnings to the Kim regime annually.

“International sanctions on North Korea have made it extremely difficult to earn foreign cash, and the slush fund is now running out,” he said.

A second Chinese source told RFA that with funds running low, North Korea has decided to participate in the upcoming Winter Olympics in South Korea as a way to improve relations and solicit charity from its rival neighbor.

“North Korea’s warm gestures toward South Korea have underlying intentions: to use the Pyongchang Winter Olympics that will be held there from Feb. 9 as a breakthrough for their financial difficulties,” he said.

He noted that South Korea's “Sunshine Policy” of the late 1990s and early 2000s—during which Seoul offered subsidies to Pyongyang in exchange for peaceful relations—had helped to buoy the North’s economy, but warned that “it won’t be easy for the South to help the Kim Jong Un regime [these days] because of international sanctions.”

“There will be a warming of relations during the Pyongchang Olympics, but if South Korea’s response fails to satisfy Pyongyang, it will ultimately strain North-South ties,” he said.

Last week, sources indicated that the Kim regime lacked funding for basic schemes such as building nursing homes for senior citizens—ordering North Korea’s provinces to build the facilities as part of a New Year’s push to complete showcase projects, but passing the cost of labor and construction on to local citizens who are already strapped for cash.

While funding for construction, including materials and labor, is being demanded from area residents, the sources said North Korean citizens are becoming increasingly frustrated with a project that will end up being hailed as one of Kim Jong Un’s achievements.

Other sources said young North Koreans frustrated by the conditions of life in their repressive, sanctions-hit country have been asking their parents for money they can use to cross the border into China, in what some are calling the best New Year’s gift they can hope to receive.