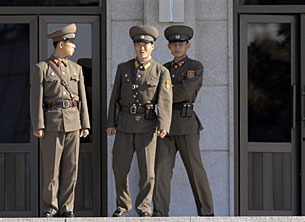 North Korean leader Kim Jong Un recently issued a directive that 16 defectors should be captured and forcibly brought back to the isolated nation after they ignored a message by state propaganda that they should return to the isolated country, sources inside the country said.

The defectors from three families from Musan in North Hamgyong, the country’s northernmost province bordering China, escaped in February, a source who is from the province told RFA’s Korean Service.

They defected during the “special monitoring period” of citizens to prevent such actions, which was enforced for Kim Jong Il’s birthday, the source, who declined to be named, said.

When the Security Department reported the case to Kim Jong Un, he was furious and issued an order for them to capture all the families who defected to China, although details about the order, including its issuance date, were not known, sources said.

“There was a strong mandate issued by [North Korean leader] Kim Jong Un to capture the North Korean defectors even if it takes a trip to South Korea,” a source in North Hamgyong province, who is acquainted with a North Korean Security Department official, told RFA’s Korean Service.

The country’s National Reconciliation and Cooperation Committee earlier this year said in a statement on Uriminzokkiri, a state-controlled website which provides Korean language news from North Korea’s Central News Agency, that defectors should return voluntarily to the country on March 18.

To make a case for defectors to return to the country, authorities said in a statement through a representative that North Korea had completely changed after the Great Famine during which hundreds of thousands, if not millions, of people died of starvation between 1994 and 1998. North Koreans still suffer from chronic food shortages and are dependent on foreign aid.

Investigation is under way

Authorities are still conducting an investigation of the defectors, concluding that they intentionally planned to flee the country with the help of border guards, one source said.

Security Department personnel believe that local border guards aided and abetted the defectors, and have expanded their investigation, sources said.

Security Department personnel hauled off a local commander and political commissars in North Hamgyong province to a place near the border with China and have been investigating them for more than a month, one source said.

A rumor is spreading that North Korean authorities have sent a local security team to China to arrest the families who defected, sources said.

If security officials in charge of the investigation cannot find the defectors or those who assisted them, they could face charges as well, they said.