More of North Korea’s elite are choosing to leave the country as their faith in the regime begins to wane.
2010-12-27
Tweet 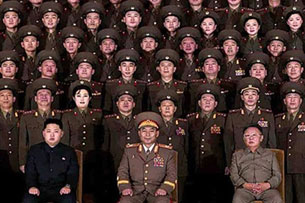 Three high-level officials from North Korea have defected to the South in what some observers see as eroding confidence among the elite in leader Kim Jong Il's regime.

The defections in recent days were reported by the South Korean media and RFA sources, but the names of the officials who hold relatively influential positions in the administration were not published because of concerns for their safety.

Mindful of relations with North Korea, Russian authorities denied him asylum, but, with the assistance of U.N. officials, the translator is expected to relocate to South Korea shortly.

The official translator said the North Korean people face hardship under the Kim regime and that he “wanted to change this situation from the world outside North Korea.”

The defection could have serious implications for Pyongyang if the translator was privy to discussions on military cooperation between high-level North Korean military officials and their foreign counterparts.

Some reports said he knew a lot about the inner workings of the regime.

Among other things, he may shed light on the means by which North Korea evades U.N. Security Council sanctions and on rumors that, in order to earn hard currency, North Korea exports technology linked to weapons of mass destruction, according to the reports.

The restaurant manager, who had been entrusted with money earned by North Korean workers abroad, reportedly defected with a large amount of U.S. dollars.

The third official who defected was the first secretary of the Youth League in North Korea’s Yanggang province. He chose to defect to South Korea despite having an impressive political resume.

Reports suggest that the official was being groomed to become a member of the [North Korean] Workers’ Party Central Committee, but he was caught watching a South Korean soap opera and subjected to severe criticism by the party.