US Gets Little in Return For Pledge to Suspend Military Exercises After Trump-Kim Summit: Experts 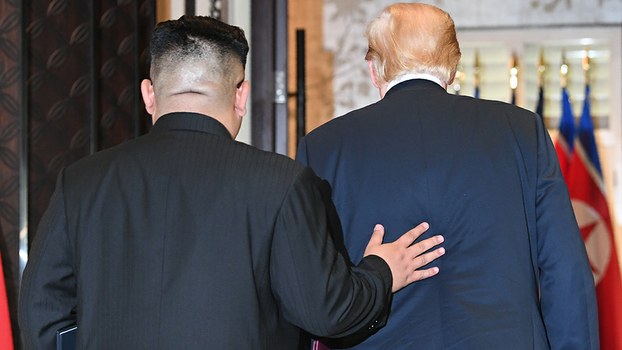 Washington has pledged to suspend military exercises on the Korean Peninsula following a historic summit between U.S. President Donald Trump and North Korea’s leader Kim Jong Un, prompting experts to question why the move was made without substantive concessions on denuclearization from Pyongyang.

At the conclusion of the summit, held on Tuesday in Singapore, the two leaders issued a joint statement pledging to establish new relations, build a peace regime on the Korean Peninsula, and committing to the recovery and repatriation of the remains of American prisoners of war and soldiers missing in action in North Korea.

The statement said that Trump had “committed to provide security guarantees” to the North and that Kim had reaffirmed his “firm and unwavering commitment to complete denuclearization of the Korean Peninsula,” echoing a pledge he had made in the Panmunjom Declaration, issued following a similarly unprecedented meeting with his South Korean counterpart Moon Jae-in in April.

In a press conference after the two leaders signed the statement, Trump pledged to suspend annual U.S.-South Korea joint military exercises—which are next scheduled for August—provided that “good faith” dialogue continues with North Korea, and said that the North had promised to destroy a ballistic missile engine testing facility.

Trump acknowledged that the statement did not mention verifiable or irreversible denuclearization of the peninsula, but told reporters that he had discussed related measures with Kim and said the process “will be verified” by a combination of American and international observers, without providing further details.

A major obstacle to reaching and implementing any nuclear deal is that the U.S. and North Korea have differing definitions of denuclearization on the Korean peninsula. North Korea wants the extended nuclear deterrence the United States offers South Korea included in any deal, while Washington sees the issue as the dismantling and removal of North Korea’s nuclear weapons and facilities.

Observers welcomed the summit as a breakthrough for the two leaders, who in recent months had exchanged insults and war threats, but said that talks going forward would need to include more specifics in order to gauge North Korea’s readiness to give up its weapons program.

Frank Aum, a North Korea expert with Washington-based United States Institute for Peace (USIP) and a former senior advisor for North Korea in the Office of the Secretary of Defense, told RFA’s Korean Service that Trump had “set a very low bar” going into the summit.

“At least there was the minimum language that both sides were looking for” in the ensuing joint statement, he said—namely “denuclearization on the Korean peninsula and security” guarantees.

Yun Duk-min of the Hankuk University of Foreign Studies in Seoul said the promises made at Tuesday’s summit did little to advance previous agreements between the U.S. and the North over the latter’s disarmament—which Pyongyang had backed out of in the past—and even “lacked verification details” included in those deals.

“This U.S.-North talk was a meeting between the leaders of two countries, so the agreement only contains theoretical points,” he said.

But other observers said that the U.S. had given up too much in pledging to end military exercises without obtaining a timeline from the North on how it will give up its nuclear weapons, adding that Trump had already made concessions by agreeing to meet with Kim at all.

“Each of the four main points was in previous documents with [North Korea], some in a stronger, more encompassing way,” he said, adding that the point on denuclearization was “weaker than the Six Party Talks language [of multilateral negotiations in 2003]” … and failed to include methods for “complete, verifiable and irreversible denuclearization” (CVID) or human rights issues.”

Michael Mazarr, a senior political scientist at the RAND Corporation in Virginia, also noted that Tuesday’s agreement was “far less detailed” than “a whole series of denuclearization agreements that they had signed over the years.”

“All this amounts to is an agreement to keep talking and see what they can work out, without any specifics,” he told RFA.

“If this indeed kicks off a very rapid process of dialogue to begin eliminating their nuclear infrastructure, that would be something new, but the agreement does not provide for that. At this point it looks, for the moment, much less detailed than what was in place before.”

Mazarr said that the U.S. pledge to suspend U.S.-South Korea military exercises would make “some degree of sense” if North Korea had requested it and the U.S. had agreed to do so as a signal of good faith, but noted that the concessions Washington received from Pyongyang at the summit were “almost non-existent.”

“In order for [suspending exercises] to make sense, that process needs to start generating North Korean responses very quickly—in a matter of weeks at most.”

Trump’s announcement of the military exercise freeze took bot the Pentagon and South Korea by surprise.

North Korean defectors, meanwhile, were split on whether more emphasis should have been placed on the issue of human rights in the North, where some 120,000 people languish in gulag-style political prison camps.

North Korea is one of the most repressive nations in the world, severely curtailing basic liberties, prohibiting political opposition and a free media, and meting out harsh punishments, including torture, rape, forced labor, and executions, for those who commit minor offenses or try to defect.

Trump said after the summit that the issue of human rights was raised during bilateral discussions, but it was not specifically mentioned in the statement issued by the two sides.

Sung Cheol Choi, a United Kingdom-based defector who heads the North Korea Economy Development Research Institute, said that the summit was the first step to improving living standards in the North, which has stagnated under international sanctions leveled in response to its ballistic missile and nuclear weapons tests.

“Human rights issues can be resolved when [North Korea] is economically prosperous,” he said.

“North Korea could develop economically through better relations with the U.S., so I hope the summit in Singapore will be a stepping stone for that development.”

But defector Sung Min Kim, a broadcaster based in South Korea, called Trump a hypocrite for “appearing hand-in-hand on the global stage” with Kim who—prior to a whirlwind publicity campaign ahead of his summit with Moon in April—had been seen as one of the world’s most brutal dictators for ignoring the well-being of his people while dedicating much-needed resources to building weapons.

“It will lead other dictators to think that however small a country they might run, they only need to focus on quickly building a nuclear weapons arsenal so that they can be an equal to the U.S.,” he said.

“Now Kim Jong Un has declared that he’s the ruler of a ‘normalized’ country. In that sense, it might have been better if the summit was not held at all.”

Kim said that human rights abuses in North Korea are “so widespread and pervasive that it is difficult to pick just one” to focus on in future talks between Washington and Pyongyang, but suggested that the country’s gulag system is “at the core” of violations.

“If the prison camps are dismantled … most of North Korea’s human rights problems will be solved,” he said, adding that Trump “should have brought up the issue” during the summit.