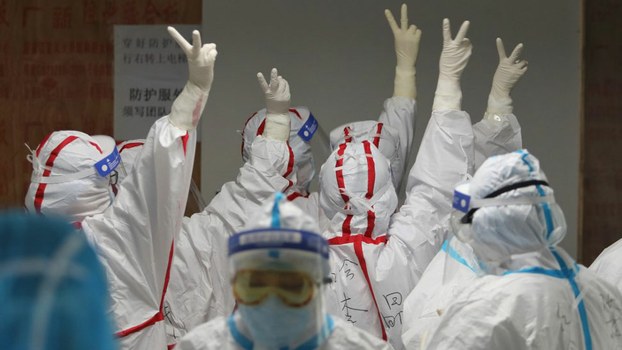 Medical staff cheer themselves up before going into an ICU ward for COVID-19 coronavirus patients at the Red Cross Hospital in Wuhan in China's central Hubei province, March 16, 2020.

Health authorities in China are reporting no new infections in the central city of Wuhan where the COVID-19 epidemic first emerged, but local residents said they fear there could be a resurgence of new cases amid an ongoing official cover-up.

"No new infections of the novel coronavirus were reported on Wednesday in Wuhan, the epicenter of the epidemic, marking a notable first in the city's months long battle with the virus and sending a message of hope to a world grappling with the pandemic," China Radio International reported on its website.

More than 10,000 people have now died in the pandemic that has spread around the world, forcing the confinement of tens of millions in their homes.

But Wuhan's tally of confirmed cases remained at 67,800 on Friday, where it has been since Tuesday, as the ruling Chinese Communist Party claimed that large scale transmissions have now largely been suppressed.

Patients continue to be treated at the city's fever clinics, CRI reported, a view that was confirmed by Wuhan residents who spoke to RFA.

Wuhan resident Zhang Ruyi said public trust in the government is at a low ebb, because of attempts by local health officials to cover up the emergence of the new pathogen in December, partly by suppressing information and partly by classifying the surge of new cases as "pneumonia."

"It's funny, that," Zhang said, adding that he is highly skeptical of the claim. "They're not just lying now; they've been lying since the start, by classifying [COVID-19] cases under other diseases."

"There are 60 million people in Hubei, and they have all just been left to live or die without any help," he said. "It's basically down to a person's immune system."

"They are saying that only a few thousand died here in Wuhan, but does that sound right?"

China has reported more than 3,000 deaths from confirmed cases of COVID-19, the majority of them in Hubei, of which Wuhan is the capital.

But Wuhan residents and citizen journalists have previously reported that funeral homes in the city were working round the clock to cremate bodies during the height of the epidemic there, while advertising to recruit manual workers to collect dead bodies from people's homes by night.

"There were more than 20 cases at Tongji today," one volunteer posted. "Wuhan hasn't dared to report them, because [local officials] are under [political] pressure."

Calls to the medical and political departments of Tongji Hospital rang unanswered on Thursday.

Wuhan resident Liu Songyang said the city is still under an information lockdown, with ever stricter controls on public speech.

"We can't tell whether there are new cases in the hospitals or not," Liu said. "But local officials are sure to be covering up the truth."

"Judging from the past two months, rumors often turn out to be true predictions."

A resident of Hubei's Xiangfan city said local authorities had only reported five coronavirus out of a total of 17 in Yuliang prefecture.

"Nobody's allowed to talk about it," the resident said. "They are reporting that only five people were infected, and the patients aren't being held in a hospital."

"They're being given injections every day, but they're not allowed to tell anyone."

An Wuhan resident surnamed Wu said there was a long line of people at Wuhan Xiehe Hospital's fever clinic on Thursday.

He said many people who had been discharged from hospital had since tested positive for the coronavirus.

"Some of the people discharged from the temporary hospitals are relapsing and then testing positive after they get home," Wu said.