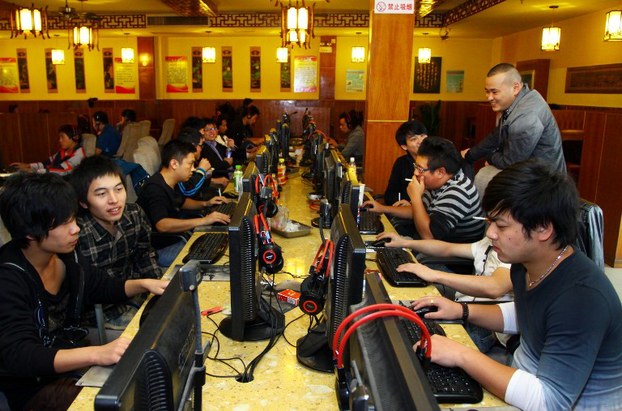 Netizens surf the web at an Internet cafe in China's Zhejiang province in a file photo.

China's powerful internet regulator has set out plans to defend the country's "national sovereignty" in the part of cyberspace behind the Great Firewall, a complex system of blocks, filters, and human censorship that determine what Chinese netizens can see online.

"The cybersecurity situation is growing more severe every day, and we face grave risks and challenges in national politics, the economy, culture, society, national defense, security, and citizens’ lawful rights and interests in cyberspace," the Cyberspace Administration said in an announcement on its official website.

It warned that "cyber penetrations" could affect the ruling Chinese Communist Party's grip on power.

"Political stability is the basic precondition for national development and the happiness of the people," the agency said.

While cyberespionage, surveillance, and hacker attacks were cited as a threat, the document also warned against "the use of networks to interfere in the internal political affairs of other countries, to attack other countries’ political systems, incite social unrest [and] subvert other countries’ regimes."

The warning comes as the authorities increasingly use espionage and subversion charges to target peaceful activists and critics of the government, alleging that they are working at the behest of "hostile overseas forces."

It also hit out at "harmful online information," including pornography, violence, and "superstition."

It said "online rumors" were also a threat to "cultural security."

"All kinds of ideologies and cultures are agitating and crossing swords online, and excellent traditional culture and mainstream value views are facing attacks," the agency warned.

It said terrorists, separatists, and extremists are "using the network to incite, plan, organize, and carry out violent terrorist activities, directly threatening the security of people’s lives and possessions, as well as social order."

Beijing blames Uyghur extremists for a string of violent attacks and clashes in recent years in the northwestern region of Xinjiang. But critics say the government has exaggerated the threat from the Uyghurs, and that repressive domestic policies are responsible for violence that has left hundreds dead since 2009.

Tibetans who engage in peaceful protest, or who own photographs or recordings of their exiled spiritual leader, the Dalai Lama, are also routinely targeted for detention, beatings, and prison sentences, while Tibetans and Uyghurs also face numerous restrictions in obtaining passports and traveling within China during times of high security alerts.

The statement also reiterated Beijing's policy of "sovereignty" in cyberspace, saying that individual nations should be free to control what happens online within their jurisdictions.

"[We will] resolutely oppose all actions to subvert our country’s national regime or destroy our country’s sovereignty through the network," it said.

"In the past few days, there was an automatic upgrade to WeChat which imposed limits on the number of people who can be in friends circles," Jia said.

"There is also an automatic deletion feature, which meant that a lot of the content we would normally post to our rights activism groups could no longer be sent," he said.

Jia said an increasing number of people are being detained or called in for questioning by police purely for posting or retweeting something online, without being involved in any other form of activity.

"This has been getting worse in recent years, but it had gotten particularly bad in the course of 2016," he said.

"Put bluntly, this is trying to obfuscate and cover up the fact that all this talk about security this, security that, is all talking about the same thing," Li said.

"And that is to block up every single channel for free information and freedom of expression."

"People are able to access and pass on news of all kinds of developments in society using the internet," Wu said.

"But the Chinese Communist Party is terrified that people will use it to complain about everything that's bothering them."

Reported by Lee Lai for RFA's Cantonese Service, and by Lin Ping for the Mandarin Service. Translated and written in English by Luisetta Mudie.

The Communist Party is free to take away Netcitizens freedom but citizens are not free to fight back. Very sad.