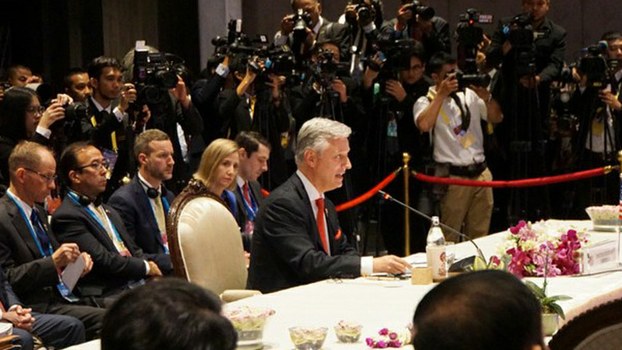 China should not be able to dictate terms of use in the South China Sea to smaller nations who have their own claims to the strategic waterway, a top U.S. security official told Southeast Asian leaders and officials gathered in Bangkok on Monday for annual talks.

U.S. National Security Adviser Robert O’Brien said the economic success of ASEAN member countries – four of whom have overlapping claims with Beijing on the South China Sea – would help the grouping’s ability “to sustain safety and security” in the region, especially in the waterway.

“Beijing has used intimidation to try to stop ASEAN nations from exploiting natural resources, blocking access to $2.5 trillion in oil and gas reserves alone,” he said at the meeting with the 10-member Association of Southeast Asian Nations (ASEAN). “These tactics go against the rules of respect, fairness and national law.”

“The region has no interest in a new imperial era where a big country can rule others on the theory might makes right,” he said, adding that Washington wanted Beijing to have good relations with its neighbors.

The summit is usually attended by heads of countries but U.S. President Donald Trump sent O’Brien in a move that reportedly disappointed ASEAN officials, who had at least expected Vice President Mike Pence or Secretary of State Mike Pompeo to attend, according to some diplomats.

Meeting host Thai Prime Minister Prayuth Chan-o-cha and the leaders of Vietnam and Laos were the only heads from the ASEAN states to attend the US-ASEAN meeting. Other countries sent their foreign ministers.

Prayuth, in his chairman’s statement wrapping up the summit, reaffirmed the importance of maintaining and promoting peace, security and freedom of navigation in the South China Sea.

China claims nearly all of the South China Sea as its own, while ASEAN members Brunei, Malaysia, the Philippines and Vietnam, along with non-member Taiwan, have their own claims to the busy waterway.

China and ASEAN has been negotiating on a code of conduct to regulate behavior in the South China Sea for nearly two decades.

Meanwhile, China has built seven man-made islands and equipped them with military runways, missile defense systems and outposts in the vast sea. Its ships patrol the sea.

“We warmly welcomed the continued improving cooperation between ASEAN and China and were encouraged by the progress of the substantive negotiations toward the early conclusion of an effective and substantive code of conduct in the South China Sea,” Prayuth said.

“We reaffirmed the need to enhance mutual trust and confidence, exercise self-restraint in the conduct of activities and avoid actions that may further complicate the situation.”

Malaysia and the Philippines called for all nations to practice restraint in the region.

“Any problem we have in the South China Sea, it can be resolved through negotiations, certainly not through violence and war,” Malaysian Prime Minister Mahathir Mohamad told reporters.

Philippine President Rodrigo Duterte’s spokesman said Manila wanted an effective code of conduct to provide stability and peace in the sea. An international court ruled for the Philippines in 2016 in a claim it brought against China regarding territorial claims in the waterway, but Duterte has disregarded the ruling in an effort to improve relations with China.

“[F]rom what I observe, they (ASEAN members) are concerned about what is happening in the South China Sea. That is why all countries have asked everyone to observe self-restraint to avoid activities that lead to more friction,” spokesman Salvador Panelo told reporters.

“We will not be a pawn to any powerful countries. We will stick to our policy for that part of the region, particularly, the area that the court says is ours, will remain ours regardless of what others do,” he said.

While Indonesia has no claim to the waterway, President Joko “Jokowi” Widodo called for peace and stability in the region.

“Through the ASEAN outlook on the Indo-Pacific region, Indonesia wants to encourage cooperation and turn rivals into partners. We also want to promote peace and stability in a larger context,” Jokowi told summit attendees, according to Foreign Minister Retno Marsudi.

China would never intimidate other nations. They just want other Nations to understand that trespassing in the South China sea will not be tolerated nor will any nations claims be acknowledged as valid.

You're right. The Chinese just want to take what that doesn't belong to them.