US Must Adopt Comprehensive Strategy to Defend Interests in Asia-Pacific: Report 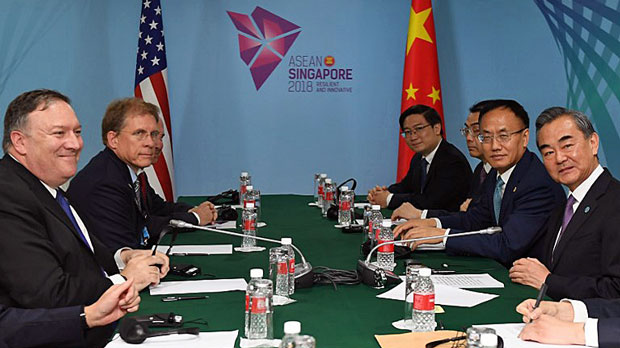 The United States must step up its involvement in Southeast Asia by adopting a comprehensive strategy with security, economic, and governance components to defend its interests and ensure peace and stability in the Indo-Pacific region, according to a report released Tuesday by a conservative U.S.-based think tank.

Southeast Asia holds geopolitical importance on account of the sea lanes that pass through it, its proximity to China and India, and the resources which it contains — all of which have driven developments in and competition over the region for hundreds of years, says the report by the Washington, D.C.-based American Enterprise Institute (AEI), which conducts public policy research.

The 68-page report titled “An American Strategy for Southeast Asia” outlines a framework for a comprehensive U.S. strategy in Southeast Asia, a region comprised of 635 million people in 11 countries, which has been increasingly affected in recent years by China’s growing economic and military might.

The Trump administration has rolled out an Indo-Pacific strategy to remodel the U.S. approach to the region in an effort to manage China’s militarization in the South China Sea and Indian Ocean and growing Chinese economic power with its multitrillion-dollar Belt and Road Initiative for infrastructure development in Eurasia and Southeast Asia.

China’s claims to disputed territory in the South China Sea and its military buildup on man-made islands pose a security threat not only to its Southeast Asian neighbors, but also to American interests in the region, given their potential to draw the U.S. into the tussles, the report says.

AEI suggests that the U.S. try to “proactively shape” the security situation in Southeast Asia in ways that are conducive to peace and stability, such as making itself available as a mediator to states if the Association of Southeast Asian Nations (ASEAN) fails to maintain peace.

“A region at peace with itself and with others will deny unfriendly external powers opportunities to exploit divisions and will ensure an environment in which Southeast Asia’s political and economic development can advance at a faster pace, to the benefit of Southeast Asia and Americans alike,” the report says.

The report also notes that because Southeast Asia as a whole has not yet embraced free trade and the free flow of capital, the U.S. should aim to reshape the region so that it embraces free-market economics and is more deeply integrated in international trade.

The report also suggests that the U.S. consider prioritizing good governance over democratization, which has proceeded sporadically in recent years in the Philippines and Indonesia, and which is nonexistent in the communist nations of Vietnam and Laos.

Because the region as a whole is in the midst of a transition from authoritarian to democratic rule, a process that the U. S. has supported, about 360 million people are living in democratically developing states, but the remainder live in countries with limited freedoms or say over who governs them, the report says.

“[A] broader and deeper embrace of free markets and of responsive and accountable government would undergird America’s pursuit of its security objectives in the region,” the report says.

To encourage this, the U.S should define a trade agenda for the region through bilateral free trade agreements, increased engagement with ASEAN, and expanded involvement in regional development banks, including the China-led Asian Infrastructure Investment Bank (AIIB) and the Japan-led Asian Development Bank.

The report also recommends that the U.S. provide humanitarian aid and accept refugees from the region to mitigate the effects of migration crises from both natural and man-made disasters.

It advises Washington to continue to press for a United Nations Security Council resolution condemning violence by Myanmar’s military, such as the two crackdowns on Rohingya Muslims in Rakhine state in 2016 and 2017 that drove roughly 800,000 refugees into neighboring Bangladesh and subjected others to killings, torture, and rape.

The resolution would impose an arms embargo on Myanmar until the national military stops targeting civilians in Rakhine and in other parts of the country and until international monitors are allowed into Myanmar, the report said.

“A free and open Southeast Asia is crucial if the United States wants to achieve its broader goals in the region,” said Michael Mazza, the author of the report, who is an AEI visiting fellow specializing in U.S. defense policy in the Asia-Pacific region.

The report was issued publicly days after U.S. Secretary of State Mike Pompeo attended the ASEAN Foreign Ministers' Meeting in Singapore, where he pledged U.S.$290 million in new security funding for Southeast Asia as a counterbalance to China’s plans to step up its engagement in the region.

The Association for Southeast Asian Nations is comprised of 10 Southeast Asian countries, with East Timor included in gatherings as an observer. The foreign ministers of ASEAN’s dialogue partners, including the U.S., China, Japan, South Korea, and Russia, also attended the meeting.

Randall Schriver, assistant secretary of defense for Asian and Pacific security affairs, said the report’s language is well-aligned with the U.S. Defense Department’s strategy in the region.

“We seek to maintain a free and open Indo-Pacific region where nations with diverse cultures and different aspirations can prosper side by side in freedom, peace, and stability,” he said at a press briefing on Tuesday, adding that countries should be free from coercion and able to protect their sovereignty.

“At the national level, we mean that societies are increasingly free in terms of good governance and fundamental human rights and liberties,” he said.

“By open, we mean that all nations can enjoy freedom — freedom of the seas and the airways and all share a commitment to peaceful resolution of disputes,” he said. “Free also means more open investment environments and improved connectivity to drive regional integration and prosperity.”

The Defense Department has increased its engagement in Southeast Asia, and its “routine military presence is a source of vital regional stability,” he said, adding that the U.S. military ensures freedom of navigation protection, conducts daily joint and multilateral military exercises and operations, and provides foreign military financing to countries in the region.

“Overall, we’re doing a great deal in Southeast Asia and are confident that we are well-positioned for the long-term strategic competition that is unfolding in the Indo-Pacific region,” he said. “Our strategy is an affirmative, positive one and it’s inclusive. And while it’s not aimed at any particular country, there should be little doubt that much of the Chinese behavior is demonstrating objectives that run counter to our objectives for a free and open Indo-Pacific.”

“We seek a positive results-oriented military and security relationship with Beijing, but Chairman Xi Jinping and the CCP [Chinese Communist Party] need to understand that while we seek cooperation where our interests align, we will compete where we must.”