Hundreds of Tibetans Mark Uprising Anniversary in Taiwan Amid Warnings 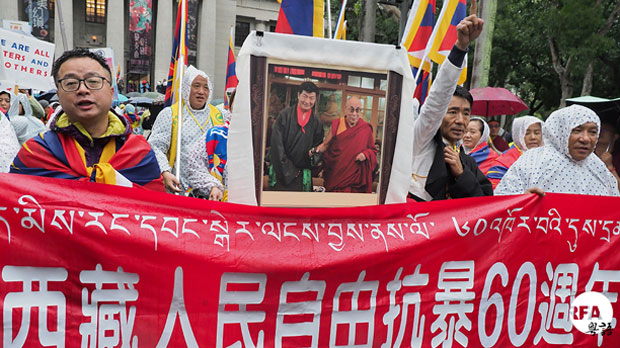 Hundreds of exile Tibetans took to the streets in Taiwan on Sunday to mark the 60th anniversary of a Tibetan uprising against the ruling Chinese Communist Party, calling on democratic countries to support their cause.

Waving the "snow lion" flag of Tibet, the display of which is banned in China, some 500 Tibetan demonstrators and supporters marched through Taipei, the capital of a democratic island that has never been ruled by the Chinese Communist Party.

Setting off from Taipei's 228 Peace Memorial Park amid a typical spring downpour, they shouted "Free Tibet!" in different languages, before hanging a white prayer shawl around a portrait of exiled spiritual leader the Dalai Lama at the close of the march.

Tibetan schoolchildren played musical instruments and sang the nation anthem of Tibet. Many on the march were also draped in the Tibetan flag.

Dawa Tsering, the Taiwan envoy for the Tibetan government-in-exile in Dharamsala, called upon "the freedom-loving people of the world to commit to end oppression in Tibet and to commit to fight against impunity," local media reported.

"To Tibetan people everywhere, let us continue our commitment to struggle for justice. Let us continue to strengthen our resilience so we can be united with our brothers and sisters in Tibet in freedom," Dawa Tsering said at the start of the march.

His words echoed those of Tibetan Prime Minister-in-exile Lobsang Sangay, who addressed a much larger rally in India earlier on Sunday.

"Tibet belongs to Tibetans," Lobsang Sangay told the rally. "Sixty years of the occupation of Tibet and the repression of Tibetans is too long."

He said Chinese leaders in Beijing were implementing policies aimed at a systematic erasure of Tibetan culture, and that Chinese authorities were preventing information from reaching Tibetans living under their rule.

The 1959 Tibetan uprising was brutally quelled by China's People's Liberation Army (PLA), and the Dalai Lama and thousands of Tibetans fled into exile at the time.

It came after the PLA marched into Tibet in 1949, forcing its government to sign a seventeen-point "peace agreement" in 1951 asserting Chinese sovereignty over the Himalayan region.

"But less than 10 years after it was signed, the Dalai Lama ... was exiled to India, and we remain in exile," Tashi Tsering said. "We must remind Taiwan that any negotiation with the Chinese Communist Party should be informed by what happened in Tibet."

"There is also Hong Kong; nobody should forget these two examples," he said, in a reference to the steady erosion of Hong Kong's traditional freedoms and status as a separate legal jurisdiction since the 1997 handover to Chinese rule.

Tibet was annexed by China following the 1959 uprising. That piece of history is now being commonly used by politicians in Taiwan to warn the island's 23 million residents against doing any deals with Beijing ahead of elections next year.

New Power Party lawmaker Freddy Lim said the experiences of Tibetans and the mass incarceration and repression of millions of Uyghurs and other Turkic Muslims by Beijing indicate that Beijing can't be trusted.

"From Tibet and the Uyghurs to Hong Kong, Taiwan has some lessons to learn from history," Lim said. "There are even people in Taiwan who have been suppressed by China."

"Anyone wanting a deal with the Chinese Communist Party wants to collude with them in lying to the people of Taiwan," he said.

"Any agreement requires mutual trust," Wu'er told the rally. "I hope that the uprising in Tibet 60 years ago will serve as a warning to the people of Taiwan that the Chinese government cannot be trusted."

"We [in 1989] were unable to bring about democracy in China ... and every year it's the same; we are unable to go home, end our exile, visit our families," he said. "We need the attention of the whole world ... which is its own particular kind of power."

Force not ruled out

Lo Wen-jia, secretary-general of Taiwan's ruling Democratic Progressive Party (DPP), agreed, warning that freedom and democracy don't fall from the skies for nothing.

"Sixty years on, are we going to draw no lessons from the Chinese Communist Party's bloody history in Tibet?" Lo said. "Peace agreements [signed with them] won't bring peace. Only by standing together will we ensure a lasting peace."

Chinese President Xi Jinping called on Jan. 2 for "peaceful unification," indicating that his government intends to annex Taiwan, but wishes to do so without a fight. However, he refused to rule out the use of force.

Taiwan President Tsai Ing-wen rejected Xi's proposal, saying the island's government wouldn't negotiate unless China itself became democratic, and that Taiwan had no intention of giving up its sovereignty as the Republic of China, which dates back to Sun Yat-sen's 1911 revolution that overthrew the Qing Dynasty (1644-1911).

Reported by Chung Kuang-cheng for RFA's Cantonese Service, and by Hsia Hsiao-hwa for the Mandarin Service. Translated and edited by Luisetta Mudie.