'We Know That She is in Very Poor Health' 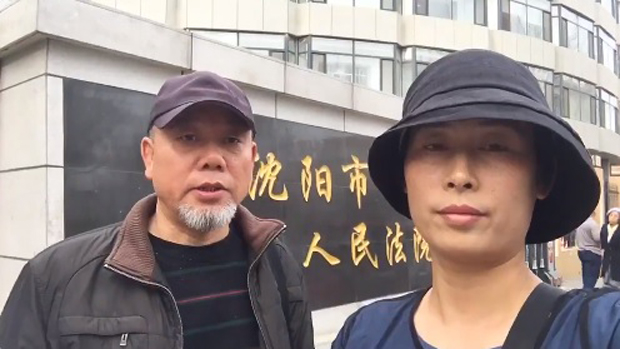 Authorities in the northeastern Chinese province of Liaoning have postponed the trial of a detained human rights lawyer, who is suffering from multiple health problems after more than 18 months of pretrial detention.

Li Yuhan was scheduled to stand trial on charges of "picking quarrels and stirring up trouble" on April 9, according to her brother Li Wensheng, who was only notified by the judge after making the trip from his home in the eastern province of Jiangsu to attend the trial.

Li told RFA he had tried to arrange a meeting with the judge after his arrival, but that the judge hadn't taken his calls.

"As for the specific reason, the judge said it was because the lawyer had requested that witnesses be allowed to appear in court," Li said.

"But when I asked the lawyer, he said that this request was made last year, that they were maybe just using this as an excuse [to delay the case]," he said.

"I will try contact the judge again, but I have been unable to contact him so far; he just says he's in a meeting."

Li Yuhan has been visited by her defense attorney in the Shenyang No. 1 Detention Center, and found to be in poor health. She has been hospitalized twice and given a number of medications, Li said.

Her lawyer has applied for her release on medical grounds.

"The judge said that it is possible the trial could happen after [April] 17, so I will wait another couple of days to see what happens," Li said.

"My sister is getting old ... and she is in poor mental and physical health, and she must be feeling the impact [of ongoing detention]," he said. "I think the lawyer will submit this as arguments [for house arrest instead of detention]."

Rights activist Yuan Shanshan said she had also traveled to Shenyang in the hope of supporting Li Yuhan at her trial, and called on fellow activists to send money and daily necessities to her in the detention center.

However, she said that detention center authorities have sometimes prevented her from receiving donations.

"Every time her lawyer visits, she tells him how she is doing, so we know that she is in very poor health," Yuan said. "A lot of people are very concerned about her case, but stability maintenance [security measures] is very tight, so ... there is no way for people to help."

"We hope to build up a little money in her account at the detention center and let her know that there are still many people outside paying attention to her situation," she said.

Li Yuhan went missing on Oct. 9, 2017, and is "at risk of torture and other ill-treatment" in the police-run No. 1 Detention Center, London-based Amnesty International has said.

Fellow activists said her detention came after she was particularly courageous in the wake of a nationwide police operation targeting rights lawyers, legal firms, and rights activists since July 2015.

Li Yuhan had acted as defense attorney to high profile Beijing rights lawyer Wang Yu, who was the first of a group of lawyers at the Beijing Fengrui law firm to be detained on the night of July 9-10, 2015, kicking off a nationwide police operation that detained or questioned more than 300 lawyers and their associates.

She was later forced to withdraw from the case after local authorities revoked her lawyer's business license.

Rights lawyers who accept politically “sensitive” cases, or who are publicly outspoken on behalf of vulnerable groups, have since been prevented from practicing law because their business licenses are being revoked during a newly instituted annual review process.

Lawyers who try to defend clients held on suspicion of crimes ostensibly linked to “state security” concerns are also denied permission to meet with their clients, or are replaced by government-appointed lawyers amid threats and pressure on the people who hired them.

Reported by Wen Yuqing for RFA's Cantonese Service, and by He Ping for the Mandarin Service. Translated and edited by Luisetta Mudie.