Thailand to Air Concerns with River Commission over Drought, Chinese Dams in Mekong 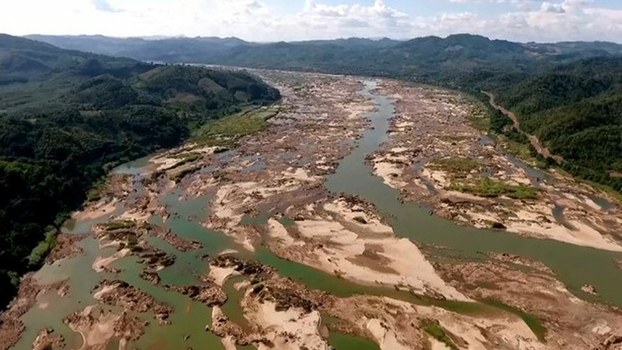 A screengrab from an aerial video shows the drought in the Mekong river in Thailand’s Nong Khai province, Oct. 28, 2019.

Thailand will raise concerns about its current drought during a Mekong River Commission meeting expected next month, the Thai water-resources chief said, as local farmers complained that dams in China were choking the waterway on which millions depend for their livelihoods.

Somkiat Prajamwong, director of Thailand’s Office of Natural Water Resources (ONWR), told BenarNews, an RFA-affiliated online news service, he had documented complaints from villagers who had suffered economic hardship as a result of the river’s erratic flow.

“We compiled from and studied those concerns of the people along the Mekong River,” Somkiat said. “During the next meeting of the Mekong River Commission, expectedly in February, we will address the issues and make it a top priority.”

The commission, known by its acronym MRC, an inter-government agency that works with regional governments to manage the Mekong’s resources, warned Sunday that water outflows could potentially drop by half along the river that stretches through China and five other nations.

The MRC’s dire forecast – which says that water levels could fall by up 70 centimeters (28 inches) in Thailand and about 25 centimeters (10 inches) in Cambodia this week – came as Beijing said it was testing equipment at one of its 11 dams on the upper Mekong River.

In October, amid protests from villagers in Thailand, the first hydropower dam on the lower Mekong River in Laos – one of Southeast Asia’s poorest countries – began its commercial operations.

Protesters said the 1,285-megawatt, multibillion-dollar Xayaburi Dam, which was aiming to sell 95 percent of its generated power to Thailand, could further disrupt the river flow that was already drying out even at the end of the rainy season.

Thai farmers say fish stocks have collapsed along the Mekong River after Beijing revealed it was testing equipment at one of its dams in the waterway’s upper reaches.

In a development plan bearing the slogan “Shared River, Shared Future,” Beijing hopes to carve a link from its Yunnan province through Cambodia, Myanmar, Laos, Thailand, and Vietnam. China says this could bring about a trade boom that could benefit up to 240 million residents in neighboring countries.

Somkiat said China had periodically notified Thailand’s office of water resources about its activities at the last minute. In his view, however, this does not provide Thai authorities enough time to warn local residents.

In late December, China’s Jing Hong Dam tested its equipment, lowering water release from 1,200 to 1,400 cubic meters per seconds to only 500-800 cubic meters, according to Thailand’s water resources office. That move lowered water levels in the Mekong between Thailand and Laos to critical points until the test was ended on Jan. 4, it said.

Somkiat said Thailand would prepare to address the issues with the four MRC members during their meeting in Vientiane.

“We will study with other countries about a lack of sediment, or even drought. It is too early to presume that they are caused by water harnessing in dam reservoirs or the production of electricity,” Somkiat said. “China and Laos also want to study the causes to solve the problems.”

China and Laos currently share information on water management as a short -term solution, Somkiat said, but he was expecting a Memorandum of Understanding (MOU) to be signed to formalize the exchange of information between the affected nations.

“Those countries have shared with Thailand information on water release and on water levels in certain areas as a short-term solution, but in the next phase there will be an MoU on official information exchanges a proper way,” he said.

While it remained unclear what kind of tests China was conducting on dam equipment, water levels on the Mekong in Chiang Rai – where Thailand, Laos and Myanmar meet – have been reduced by about 40 percent, from three meters to less than one, Brian Eyler, director of the Stimson Center’s Southeast Asia program, told Al Jazeera.

Such sudden drops and rises, Eyler said, confuse fish in their natural movements in the river, leading to a drop in fish stocks. “For a river to be healthy it needs regular flow and not to be shocked with unnatural ups and downs,” he said.

The Electricity-Generating Authority of Thailand is the main buyer of the Lao government’s generated power, paying an estimated 12 billion baht (U.S. $4 billion) a year for combined outputs of 1,545 megawatts from the Xayaburi Dam and Don Sahong Dam, experts told BenarNews,

But activists and locals said the dams had affected the environment and people’s livelihood.

“The drought that has been lasting since last year is, besides lower rainfall, caused by water control by dams in China and Laos, creating unnatural tides,” Montree Chanthavong, an environmentalist with the Mekong Butterfly group, told BenarNews.

Montree also said the Mekong water turned into aquamarine blue last November due to a lack of sediment, which is a sign of a degrading ecological system.

“The lack of sediment causes fish to migrate in the wrong time and resulting in less breeding,” he said.

Another farmer said the drastic change of Mekong appeared after Xayaburi began operating.

“When Xayaburi Dam operated in July 2019, the Mekong turned dry while usually the period from June to August should have had high tide,” Saman Kaewpuang, a farmer in northeastern province of Nong Khai, told BenarNews. “Fishes that are supposed to lay eggs in tributaries died.”