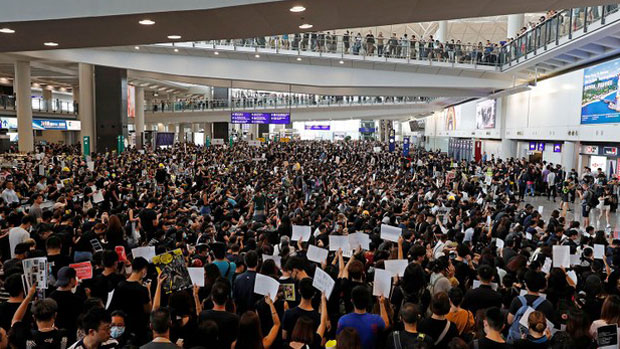 Riot police stormed the Hong Kong International Airport on Tuesday, clashing with protesters after several thousand people occupied the facility and caused the mass cancellation of flights for the second day in a row, amid growing public anger over police violence and government plans to allow extradition to mainland China.

Reuters news agency reported that scuffles broke out after an injured person was taken out of the main terminal by medics after he was held by a group of protesters, some of whom claimed he was an undercover mainland Chinese police officer.

Riot police who moved pushed some protesters back and applied pepper spray, while at least two protesters were taken away by police, the agency said.

A situation that looked poised to erupt into serious violence calmed down after a few hours without a more forceful police intervention, Reuters added.

While flights returned to normal briefly on Tuesday morning following Monday's shutdown, the passenger terminal at Chek Lap Kok was shut down by the sheer size of the crowds by the afternoon, with protesters making temporary barricades out of luggage carts.

Chanting "Meet the five demands!" and "An eye for an eye!" after a protester underwent emergency surgery after being shot in the eye by a "non-lethal" police projectile believed to be a bean bag round.

"I was born and educated in Hong Kong, and I never once imagined that it could turn into this in the space of two months," one protester told RFA. "[A place where] police would fire tear gas in an enclosed space, fire bullets."

"As for our shameless government, I don't think we will necessarily be able to change anything, but it's better than cowering at home."

The crowd quickly brought normal operations to a standstill, with some passengers expressing annoyance at the disruption, and others saying they supported the anti-extradition movement in spite of the inconvenience.

The anti-extradition protests are calling on chief executive Carrie Lam to formally withdraw planned amendments to extradition laws that would allow alleged criminal suspects to be sent to face trial in mainland courts, to release all protesters without charge, and to stop describing the protests as riots or protesters as rioters.

The United Nations Human Rights Office on Tuesday hit out at the Hong Kong government over the police use of tear gas and other weapons in a non-approved manner.

"The ... Office has reviewed credible evidence of law enforcement officials employing less-lethal weapons in ways that are prohibited by international norms and standards," spokesman Rupert Colville said in a statement.

"For example, officials can be seen firing tear gas canisters into crowded, enclosed areas and directly at individual protesters on multiple occasions, creating a considerable risk of death or serious injury," he said in a written statement, calling for an independent investigation.

"The Office urges the Hong Kong ... authorities to act with restraint, to ensure that the right of those who are expressing their views peacefully are respected and protected, while ensuring that the response by law enforcement officials to any violence that may take place is proportionate and in conformity with international standards on the use of force, including the principles of necessity and proportionality," it said.

Protesters also want Lam to formally dissolve the Legislative Council
(LegCo) and implement political reforms leading to fully democratic elections with public nominations both to the legislature and for the city's chief executive.

Lam on Tuesday called for unity, an end to the escalating civil disobedience that has rocked the city for two months, and a peaceful dialogue to resolve the impasse.

"Nobody wants to see anyone get hurt," Lam said. "As for the woman whose eye was injured, I hope she makes a rapid recovery, and this will be investigated if she is willing to file a complaint and tell me what happened on the day."

Claudia Mo, who leads the pro-democracy camp of lawmakers, said Lam's words were like a stuck record, however.

"Lam still repeats herself like a broken tape-recorder, mistaking the effect for the cause and painting black as white," Mo told reporters.

"She says that the so-called violent protesters have brought chaos to Hong Kong, while making no attempt to resolve the current issue."

Meanwhile, pro-China groups ramped up the rhetoric against the anti-extradition movement, after Beijing's Hong Kong and Macau Affairs Office said the protesters' actions were approaching "terrorism."

Forty pro-China lawmakers issued a statement on Tuesday saying that what were once peaceful demonstrations against amendments to extradition laws had become "violent conflicts spreading through a number of districts," and supporting the police in their attempts to "restore social order."

Business groups and airlines echoed the claims, some of them publishing statements in Hong Kong newspapers on Tuesday.

Meanwhile, the ruling Chinese Communist Party has clamped down on any reporting coming out of Hong Kong, in a bid to control the narrative about Hong Kong from behind the Great Firewall.

"The only media doing much reporting out of Hong Kong are the China Daily, which has a mostly overseas readership, and the Global Times," a veteran journalist surnamed Tu told RFA.

"All of the Chinese media are taking the exact same line, without exception."

"There are some set piece articles that they ask all platforms to publish, and the comments have to be reviewed as well," Jiang said. "We have a deputy editor whose job it is to liaise with the Cyberspace Administration."

"There have been a very large number of deleted accounts on each platform too; several thousand of them," he said.

Repeated calls to the Cyberspace Administration rang unanswered during office hours on Tuesday.

These 2 posts show that red Chinese are not
happy with those who want freedom and liberty in their own land.

Check with the Red Indians whether they have true liberty and freedom in their own land.

"As for the woman whose eye was injured, I hope she makes a rapid recovery, and this will be investigated if she is willing to file a complaint and tell me what happened on the day."//////////// Losing an eye for democracy is I supposed worthwhile. I am surprised neither the US nor UK has stepped forward to offer to give her a new eye.

"As for our shameless government, I don't think we will necessarily be able to change anything, but it's better than cowering at home."////////Why stay in Hong Kong when you are so unhappy? Ever thought of moving to London with your loving former colonial master or to the US with you American backer where you can enjoy all the freedom and democracy that is not available in Hong Kong?