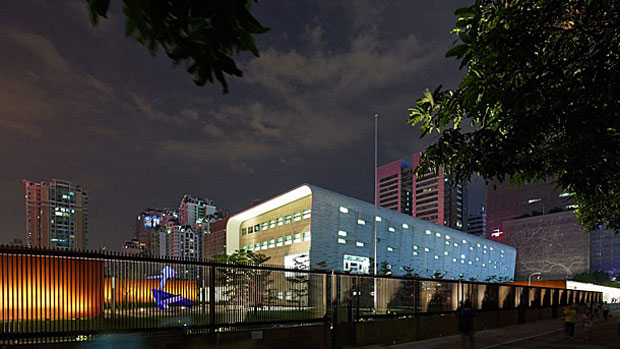 The U.S. consulate in Guangzhou, China, is shown in an undated photo.
U.S. government photo

As the United States investigates medical findings that at least 24 of its embassy and consular staff, including at least one in China, have suffered symptoms similar to "minor traumatic brain injury," Chinese experts said that some form of sonic attack can't be ruled out for the time being.

The U.S. has set up a task force to identify and treat affected personnel and their family members, and withdrew some diplomatic personnel from China earlier this week, pending further investigation of a possible "sonic attack."

"The precise nature of the injuries suffered by the affected personnel, and whether a common cause exists for all cases, has not yet been established," the U.S. State Department said in a statement on its website.

While the majority of affected staff have been posted in Cuba, the statement said that at least one of those known to be affected was "a U.S. government employee serving in China."

A directive to overseas U.S. government staff warns: "Do not attempt to locate the source of any unidentified auditory sensation."

China has said it is carrying out a "careful investigation" of the reported incident of its own.

"It has also given feedback to the U.S., to the effect that it has yet to discover the cause of the situation as reported by the U.S., or any clues," foreign ministry spokeswoman Hua Chunying told a recent news conference in Beijing.

An employee who answered the phone at the U.S. consulate in the southern Chinese city of Guangzhou declined to comment.

"You will have to ask the U.S. Embassy in Beijing about this," the employee said. "I don't know about it."

However, repeated calls to the U.S. Embassy spokesperson's number went straight to voice-mail during office hours on Friday.

Choi Kin, president of the Hong Kong Medical Association (HKMA), said it was possible that consular staff might have been affected by high-frequency sound waves over a long period of time.

"The use of powerful high-frequency sound waves can affect people's hearing, possibly to the extent of causing long-term damage," Choi told RFA.

"Sound is caused by a film vibrating in your ear, and the faster the vibrations, the higher the sound frequency," he said. "Some frequencies are audible, and others are inaudible."

According to Lee Cheng-hsiu, a senior assistant research fellow in the national security division of Taiwan's National Policy Foundation, there is a precedent for sonic attacks, which can cause physical harm, and which are very hard to trace.

"This sort of operation was first used by the Soviet Union," Lee said. "For example, if party A wants to attack party B, they might use [a sonic weapon] for two or three hours at a stretch, and then for another two to three hours."

"The aim is to leave a person in a state of disorientation, at odd times, and to ensure that they never find out [the source]," he said.

Lee said the incident could have a negative effect on Sino-U.S. relations, already strained by a trade dispute, especially as Washington has scant hard evidence that Beijing is behind the incident.

Because of their apparently anomalous nature, U.S. officials only acknowledged the Cuba complaints as a form of "attack" last August.

The Trump administration still hasn’t identified a culprit or a device to explain the suspected attacks in Havana, according to an Associated Press report last September, while few officials appear to be authorized to discuss the issue.

Some officials said there were strong indications of a sonic attack, reporting vibrations, "grinding noises," loud ringing sounds, or high-pitched chirps similar to crickets or cicadas, the AP reported.

But others later reported symptoms without having heard anything at all.

Symptoms included brain swelling, dizziness, nausea, severe headaches, balance problems, and tinnitus, or prolonged ringing in the ears, some of which disappeared once the officials left Cuba, the report said.

Reported by Wong Lok-to for RFA's Cantonese Service, and by the Mandarin Service. Translated and edited by Luisetta Mudie.

It gives me great pleasure to know that US personnel has been attacked and suffered consequences and until today they do not know who done it and from where the attack came from. The next thing to do is to move this secret weapon to mainland USA.

This unidentified sound attack may happened just with a single individual
too for their experiment and that individual may not even know what it is and just Bad Luck got sick and blame on own health.