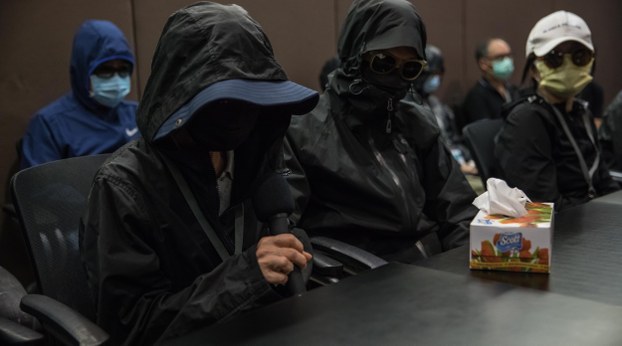 Relatives of 12 Hong Kong people detained in Guangdong for Attempting to Flee to Taiwan attend a press conference in Hong Kong, Sept. 12, 2020.

Twelve activists detained in the southern Chinese city of Shenzhen after they tried to flee Hong Kong in a speedboat have been accused of "separatism" by a foreign ministry spokeswoman in Beijing.

"They are not democratic activists, but elements attempting to separate #HongKong from China," Hua wrote in response to a tweet from U.S. State Department spokesperson Morgan Ortagus, who condemned the detention of the 12 Hongkongers.

"Legitimate governments do not need to wall their countries in and prevent their citizens from leaving," Ortagus had tweeted.

"The arrest of 12 Hong Kong democracy activists is another sad example of the deterioration of human rights in Hong Kong," she wrote on Saturday.

The family members of six of the detainees held a press conference on Saturday, calling on the Hong Kong authorities to bring them back to the city as soon as possible.

Concerns are growing over the lack of access to lawyers hired by their families and to adequate medical care in Shenzhen's Yantian Detention Center.

The 12 Hongkongers are aged 16 to 33, and were held on suspicion of "illegal immigration" after they tried to escape by speedboat to the democratic island of Taiwan last month.

Hong Kong activist Andy Li – who was arrested and released on bail earlier this month by Hong Kong for alleged national security law violations – was among them, sources told RFA at the time.

The Shenzhen police department confirmed for the first time on Sunday that 12 Hong Kong citizens were under criminal detention on suspicion of illegally crossing the border, and that investigations are ongoing.

"Police will protect the legitimate rights and interests of criminal suspects in accordance with law," the department said via its official social media account on Weibo.

But defense lawyer Lu Siwei, who was recently hired by the family of one of the detainees, told RFA he had been turned away from the detention center on several occasions after he went to request a meeting with his client.

The mother of one detainee, Tang Kai-yin, said she didn't know whether he was alive or dead.

Tang's brother said he was concerned about his brother's health in detention.

Hong Kong's Immigration Department has since said the 12 are in good health, and they have got lawyers to represent them.

But relatives of the detainees told reporters at the weekend that they had been given no information on the charges against their loved ones, and said assistance offered by the Hong Kong authorities was inadequate.

Hong Kong Secretary for Security John Lee declined to intervene on behalf of the 12 detained in Shenzhen, saying only that the Hong Kong authorities will keep track of their case.

"People should respect the local law wherever they are and take responsibility for their own actions, including criminal liability," Lee said.

"Governments respect different jurisdictions operating according to their own laws," he said.

Council Front lawmaker Chu Hoi-dick said the 12 could now be used as bargaining chips by the ruling Chinese Communist Party.

"The moment family-appointed lawyers were denied to see some of the detainees, it could be expected that the Chinese Communist Party has designated the 12 people as highly sensitive cases," government broadcaster RTHK quoted Chu as saying in a statement.

Meanwhile, Taiwan's Central News Agency (CNA) quoted a source on Sunday as confirming reports that five Hongkongers who attempted to reach the island by boat have been detained there.

Taiwan journalist Edd Jhong, who says he helped them get to Taiwan, has claimed that the former anti-government protesters had not been allowed to contact their families or lawyers.

CNA's source on Sunday confirmed the detentions, denied they were under "house arrest," but gave no timeline for their release.

It said five had been granted access to lawyers, and were not being held incommunicado.

'Taiwan must be cautious'

Taiwan Protestant pastor Hwang Chun-sheng, who has helped Hongkongers fleeing to Taiwan following a city-wide crackdown on the protest movement that has intensified under a draconian national security law since July 1, said Taiwan has helped many people from Hong Kong.

"But Taiwan has to be very cautious, because China and the U.S. are in a state of quasi-war," Hwang told RFA. "People who know about these things can't talk too much about them."

He said all five Hongkongers had been in touch with their families via officials, to let them know they are safe.

Yang Sen-hong, president of the Taiwan Association for China Human Rights, said it is unclear who the five Hongkongers are.

He called on the Taiwanese government to pass a refugee law setting out how asylum-seekers are to be treated.

"Only then will we have a legal framework to avoid the issue of illegal immigration," Yang said. "Otherwise, people who enter Taiwan will be dealt with under current law [as illegal immigrants]."

Reported by Hwang Chun-mei for RFA's Mandarin Service, and by the Cantonese Service. Translated and edited by Luisetta Mudie.

The best way to escape Hong Kong would be with a cargo ship right now.