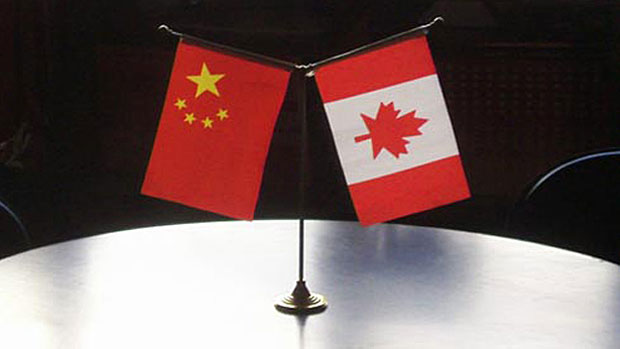 The Chinese and Canadian flags are shown in a file photo.
Public Domain

A court in the southern Chinese province of Guangdong has sentenced a Canadian national to death drug smuggling, drawing protests from Ottawa, while handing a suspended death sentence to a U.S. citizen.

Fan Wei was handed the sentence along with 10 others by the Jiangmen Intermediate People's Court, which found him guilty of drug trafficking as part of an international narcotics syndicate that sold and produced methamphetamine and dimethylamylamine in Guangdong's Taishan city between July and November 2012.

"Canada stands firmly opposed to the use of the death penalty, everywhere around the world," Freeland said. "We think that this is a cruel and inhumane punishment, which should not be used in any country. We are ... particularly concerned when it is applied to Canadians."

The Canadian foreign ministry has called for clemency.

The court said in a statement that the number of drugs sold and manufactured "was extremely large and the crimes were extremely serious."

All of those convicted have 10 days to lodge an appeal. The sentences followed a trial in 2013, but the Jiangmen court has repeatedly applied for extensions to the three-month time limit to pass sentence.

The Supreme People's Court approved more than 20 such extensions, with no explanation provided to the families, according to U.S.-based rights group the Duihua Foundation.

The group said that no forensic evidence has was produced, with no drugs in his system, no DNA on the packages, no fingerprints on the packages, or drug paraphernalia, tying Swidan to the drugs.

No emails, letters, or phone calls were cited, linking him to any transaction, and Swidan had no previous history of criminal behavior, it said.

"The Swidan family was never told why the judgment was repeatedly extended, a violation of a basic norm of transparency," Duihua's executive director John Kamm said in a recent statement.

"Mr. Swidan’s rights to a fair trial and due process have been seriously abused," Kamm said.

Fan is the second Canadian national to be sentenced to death this year.

At least 13 Canadians were detained after Chinese officials vowed to retaliate for the arrest in Canada of Meng Wanzhou, chief financial officer of China's flagship telecoms company Huawei.

While at least eight have since been released, a court in the northeastern city of Dalian on Dec. 29 handed down the death penalty to Canadian national Robert Schellenberg, who had  originally been sentenced to 15 years in prison for drug smuggling.

Kovrig is a diplomat on leave who was working for the International Crisis Group think tank at the time of his detention, while Spavor is an entrepreneur known for contacts with high-ranking North Korean officials, including leader Kim Jong Un.

If China executes a Canadian or an American Canada and the US can do the same. Just arrest any Chinese and get him executed.

There are no genuine criminal due process rights in China. The police can detain you for several weeks without a warrant or seeing a magistrate. You don't have the right to your own attorney. The state can force you to accept their attorney. You have no right against self-incrimination. There are no jury trials. These guys were convicted when no evidence links them to the crimes. And it's a death sentence for a non-violent offence. China is extremely backward when it comes to individual rights & rule of law.