China plans a new press campaign to strengthen the Communist Party's image in the coming year, while writings on Taiwan and other 'sensitive' topics will receive closer scrutiny.
2008-12-29
Tweet 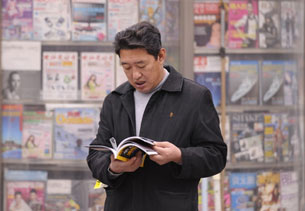 A man reads a magazine beside a newsstand in Beijing in a file photo.
AFP
HONG KONG—Chinese authorities will launch new press controls in the coming year to focus on the "accomplishments" of the Communist Party in advance of the 60th anniversary of the People’s Republic of China in October, sources say.

“Before October, the propaganda focus [of China’s official media] will be the ‘main melody’—reporting on the history of the Party and socialist economic development,” an official in Beijing said, asking not to be named.

Media will focus primarily on “accomplishments after the founding of the People’s Republic,” the official said.

Meanwhile, authorities have called for tighter political control of publications across the country.

China’s General Administration of Press and Publication (GAPP) recently ordered publishing houses to ensure “political correctness” and highlight the accomplishments of the Party in everything published in the coming year, according to the Chinese cyber news group “canyu.org.”

In a directive, GAPP told all publishers to seek permission before publishing “sensitive” titles, the news group said.

Also speaking anonymously, a staff member in the editorial office of a publishing house in Nanjing confirmed the tighter controls.

“Prior approval by higher authorities of important topics has always been required, but recently even stricter gate-keeping has been enforced,” she said.

And though tensions across the Taiwan Strait have recently eased, all books and other writings relating to Taiwan must be approved by provincial authorities before publication, she added.

A manager in another publishing house in Nanjing agreed.

“Titles on relations across the Taiwan Strait are sensitive and risky. Usually, we don’t plan to publish books in this category,” he said.

Authorities have banned outright all books that “threaten China’s territorial integrity and national security, and that incite ethnic secession or divulge state secrets,” according to “canyu.org.”

The General Administration of Press and Publication has set Jan. 20 as the deadline to obtain permission for all titles to be published in the coming year, the news group said.