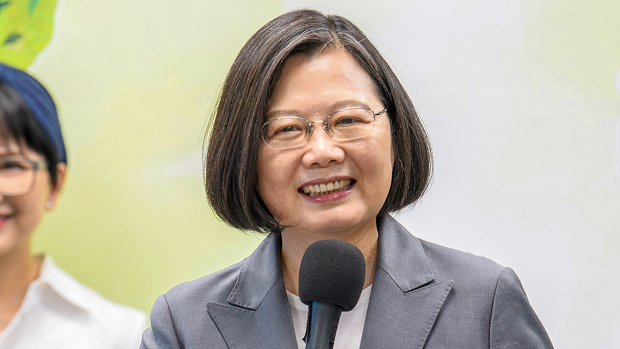 President Tsai Ing-wen of of Taiwan has been named by Time Magazine as one of the 100 most influential people of 2020 for her insistence that the democratic island's 23 million people have no interest in being ruled by China.

"President Tsai Ing-wen is a signal lamp casting out China’s looming shadow, conveying to the world that Taiwan will not acquiesce to the Chinese Communist Party," Republican Senator Ted Cruz wrote in his description of Tsai on the magazine's website.

He said that while Taiwan lies just 100 miles off the coast of China, Tsai has managed to carve out her own path, neither losing her way politically, nor being drawn into Beijing's rhetoric.

Taiwan still bears the official name of the 1911 Republic of China after Kuomintang forces occupied the island at the end of World War II.

A part of Japanese territory for the first half of the 20th century, the island has never been ruled by the Chinese Communist Party, nor has it ever formed part of the People's Republic of China.

"Freedom is its North Star," Cruz wrote of Taiwan under Tsai's presidency. "When cynics said Taiwan was too small and too isolated to stand up against China’s regional ambitions, President Tsai stood tall."

He added: "China is the world’s largest communist regime, and this self-made woman is determined to resist it. She does not cower."

'Cool head in a time of crisis'

Yu Mei-nu, a former lawmaker for Tsai's ruling Democratic Progressive Party (DPP), said Tsai has the ability to keep a cool head amid rising tensions in the region, with China's People's Liberation Army (PLA) making a string of incursions into Taiwanese airspace and holding large-scale military exercises in the water nearby in recent weeks.

"She has made the international community sit up and take notice of Taiwan, diplomatically speaking," Yu said. "Taiwan is now in the best period in his history, although it is also a time of crisis."

"China insists on taking the most extreme approach, and keeps testing our limits," Yu said. "At the same time, it is also testing those of the United States."

Cross-Strait Policy Association researcher Chang Yu-Shau said Tsai's response to Chinese president Xi Jinping's insistence that the island "unify" with China in January 2019 had earned her a place in the list of prominent world leaders.

"President Tsai showed just how tough she is in the wake of Xi's speech last year, and how strong Taiwan can be faced with China's might," Chang told RFA. "There was also her support for the Hong Kong [protesters]."

Reported by Hwang Chun-mei for RFA's Mandarin Service, and by the Cantonese Service. Translated and edited by Luisetta Mudie.