Three Detained in China Over Poster Campaign on Massacre Anniversary 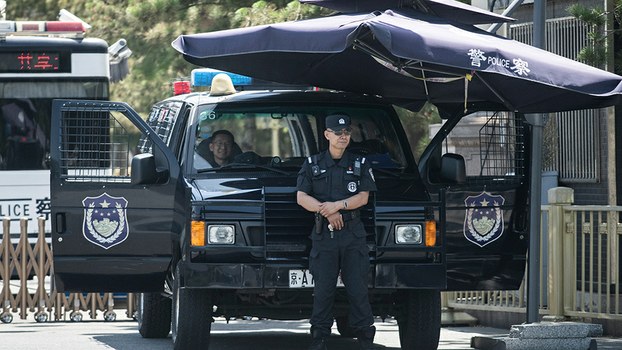 Police officers stand guard near Tiananmen Square, on the anniversary of the 1989 crackdown on protesters, in Beijing, June 4, 2018.

Authorities in the eastern Chinese province of Jiangxi and the central province of Hunan have detained three people for subversion after a fly-posting campaign in at least two cities calling for a reappraisal of the bloody crackdown on the 1989 student-led movement on Tiananmen Square.

The clandestine notices took the form of pasted posters and spray-painted messages on walls and notice-boards in Jiangxi's Nanchang city and in Hunan province, according to social media posts.

Photos of the posters showed various slogans, including a call to "Reappraise June 4, 1989, end the one-party dictatorship," and "Officials should make public their assets."

The posters appeared around the 29th anniversary of the People's Liberation Army (PLA)'s crackdown on unarmed civilians on June 4, 1989, and were all signed with three characters, the Xinghua Club, or "the Prosperous China Society."

All three are being held on suspicion of "incitement to subvert state power" after materials linking them to the Xinghua Club were found on their computers, sources told RFA.

"I think he and his wife were detained because of [the Xinghua Club]," a close associate of Zeng's said on Tuesday. "This guy tends to do things on impulse, but I'm not sure that he was directly involved in [posting the messages] on this occasion."

"Copies of the detention notification circulating online ... don't specifically name Zeng Guofan," he said. "But Zeng Guofan is a very close friend of Wang Yifei's, so we are guessing that he has been implicated in that case."

Zeng was previously detained for one month during the April 2014 trial of New Citizens' Movement activist Ding Jiaxi in Beijing.

His associate said the Xinghua Club may not exist as any sort of formal entity.

"My feeling is that there is likely no such organization," the source said. "It could be that the people who posted these messages wish there was."

"I think maybe the authorities wouldn't be taking this so seriously if they hadn't put [Xinghua Club] on the posters," he said.

An employee who answered the phone at the Weiquanwang human rights website, which first broke the story of the "Xinghua Club" activists' detentions, declined to comment when contacted by RFA on Tuesday over reports that Wang Yifei had worked for the site.

"I don't actually know whether Wang Yifei is a volunteer for Weiquanwang," the employee said. "I have seen these reports online, but perhaps that is inaccurate information."

Beijing-based political commentator Zha Jianguo said that President Xi Jinping has shown ever decreasing tolerance for all forms of public dissent since taking power in 2012.

"As far as the authorities are concerned, any kind of disguised, loose-knit organization is crossing a red line," Zha said. "Also, you're not allowed to call for a reappraisal of June 4, 1989, nor to call on officials to publish details of their assets."

"You're also not allowed to take to the streets; stability trumps everything," he said.

The Xinghua Club appears to be a nascent network that largely operates online to inspire low-level forms of public protest. It has also been linked to posters and graffiti calling for direct elections to China's People's Congresses.

Reported by Gao Feng for RFA's Mandarin Service, and by Ng Yik-tung and Lam Kwok-lap for the Cantonese Service. Translated and edited by Luisetta Mudie.