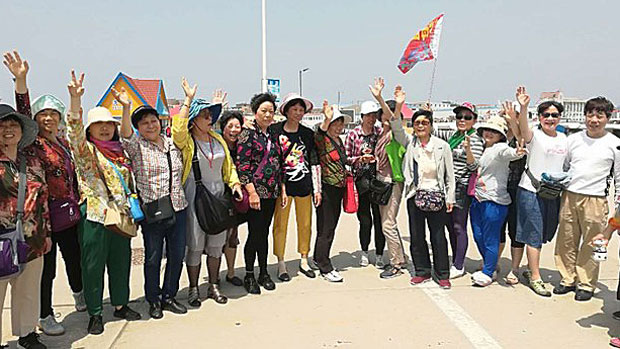 Authorities in the eastern Chinese province of Shandong have detained 23 petitioners, mostly elderly women, who had traveled there from Shanghai ahead of the Shanghai Cooperation Organization (SCO) leaders' summit this weekend.

The group, which included long-time petitioners Huang Yifang, Ding Juying, Wang Peiyun, Tang Xiazhen, Zhao Guojun, and Chen Yaqin, said they were simply on vacation at the time, and had no plans to petition in the coastal city of Qingdao, the summit's venue.

But they were suddenly intercepted by large numbers of police officers and private security guards on the morning of June 7 in Shandong's Weihai city, they told RFA.

"We are on the freeway back to Shanghai right now, the whole busload of us," Huang Yifang told RFA. "We were just getting ready to set off for the next stop on the tour, as arranged by the tour guide, at 5.30 a.m."

"We were just getting ready to leave, when a huge gang of police officers and security guards came," she said. "There were so many of them."

Asked if the group had any plans to carry out petition-related activities, Huang said: "No, we didn't. That wouldn't even have occurred to us."

"We were going to be coming back home [on Thursday] anyway, according to our [tour] contract."

She said she had no idea why the raid had been ordered.

"We were enjoying ourselves; there was no reason for this. We were detained just when we were getting ready to leave," Huang said. "They forced us to go back by taking our ID cards away from us, and they haven't yet given them back to us."

Shanghai petitioner Tong Liya said she was also detained soon after arriving in Qingdao, where she had hoped to meet up with the tour group.

"They booked this trip on May 7, and set out on June 4," Tong told RFA. "I had wanted to join the group, but they were fully booked, so I wasn't able to do that."

"So I and a friend went over there by train," she said. "They reported me to the police the moment they scanned my ID, and I was detained. They told me there was no way they would let me remain in Qingdao."

The ruling Chinese Communist Party is implementing draconian public security measures in Qingdao, including racial profiling of the Uyghur Muslim population, ahead of the SCO summit on June 9.

Authorities are also requiring local businesses to replace the Wi-Fi connections they offer to customers with a government-approved router engineered to prevent people from circumventing the complex set of blocks, filters, and human censorship known as the Great Firewall.

Critics of the ruling Chinese Communist Party are also being placed under house arrest ahead of the summit, activists said.

Police are also targeting anyone whose social media accounts are frequently shut down, usually because they have posted or retweeted something considered "sensitive" under increasingly draconian controls on public speech, as well as members of the banned Falun Gong spiritual movement, which the government has labeled an "evil cult."

President Xi will chair the 18th SCO Summit from June 9-10 in Qingdao, Xinhua reported on Monday.

The regional grouping of China, Russia, India, Pakistan, and their neighbors in Central Asia aims for greater cross-border cooperation between its members.

However, the SCO has been accused by rights groups of facilitating each others' human rights abuses, while justifying them as being part of antiterrorism cooperation.

In Beijing, meanwhile, volunteers are being recruited to spy on local residents, to prevent any who may be thinking about lodging a complaint against the government, RFA has learned.

The neighborhood committee in the city's Zhongguanyuan district recently advertised for volunteers to act as "information officers" in the nationwide "stability maintenance" operation targeting government critics and activists.

Anyone under the age of 70 who is familiar with local residents and their "interpersonal relations" is eligible to apply, the notice said.

An employee who answered the phone at the Zhongguanyuan neighborhood committee on Thursday confirmed that the advertisement was genuine.

"We want to hire some elderly ladies to help us to safeguard the stability of the community," the employee said. "This is about reporting anyone suspicious, such as a thief."

The ruling Chinese Communist Party is developing a new system of social control that will carve up neighborhoods into a grid pattern with 15-20 households per square, and give each grid a dedicated monitor who will report back on residents' affairs to existing neighborhood committees, according to documents seen by RFA in recent weeks.

Neighborhood committees in China have long been tasked with monitoring the activities of ordinary people in a certain area, but the new grid management system will allow the ruling party to manage the daily lives of ordinary people even more closely, as well as giving indicators of possible dissent at an early stage.

Under the system, grid monitors will also be expected to report back to neighborhood committees on "hidden dangers" in their grid, as well as all the aspects of residents' lives, political opinions, and complaints, the document said.

But the Zhongguanyuan employee denied that petitioners would be targeted.

"Take me, for example. I wouldn't even know who was petitioning and who wasn't," he said. "I think some people are a bit too sensitive about the words 'stability maintenance'."

Reported by Yang Fan for RFA's Mandarin Service, and by Wong Lok-to for the Cantonese Service. Translated and edited by Luisetta Mudie.