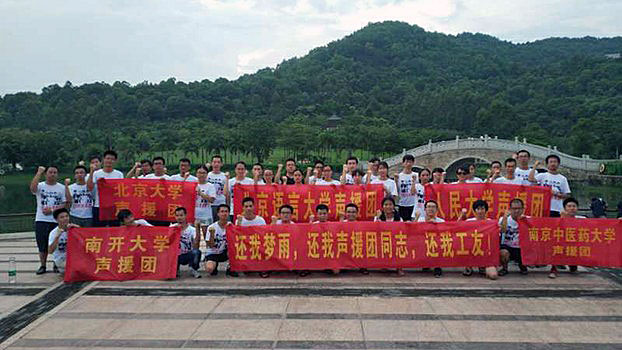 Authorities at China's prestigious Peking University detained a number of student members of the school's Marxism study group on Friday amid an ongoing crackdown on left-wing support for workers who try to organize, a Maoist group said.

A handful of former members of the group, some of whose members had supported workers in the southern city of Shenzhen, held up placards on the Peking University campus on Friday in protest at the university's "forced and unilateral 'reorganization'" of their group, the Maoist Jasic Workers' Solidarity Group (JWSG) said in a statement posted to Github.

"Some minutes later, dozens of security and supervisory personnel charged into the group of students, grabbing and assaulting protesters," it said.

"Some students were even beaten down to the ground, fingers bloodied and glasses broken. Eventually, they were ... dragged into a nearby building."

It said three students were initially detained in a meeting room, and their cellphones were forcibly taken from them by security personnel, while one student’s hands were held behind his back, as he was detained in another room.

Video of the scene posted to Twitter showed a young woman shouting at uniformed personnel not to touch her phone, and a young man shouting from the floor, also surrounded by security guards.

After the security personnel swooped on the protesters, they detained all of them in the building, according to the JWSG, which also posted fragmented video clips of the incident to Twitter.

"At 16:40, the detained students sent information out via app," the JWSG said. "They claimed that they were detained in a classroom, some students’ glasses and shoes were pulled away, and clothes were ripped apart."

Beijing rights activist Li Wei said the ruling Chinese Communist Party is concerned over growing support for its left wing amid slower economic growth and an ongoing trade war with the U.S.

"In the past couple of years we have seen a lot of support for the Maoist left among ordinary people, especially because of the economy; they feel that life is very hard now, and they look back to supposedly greater equality of the Mao era," Li said.

"They are starting to make demands, and of course the authorities are very worried about this," he said, adding that there are strong practical concerns driving the crackdown on Maoists by a party brought to power by Mao.

"It may be muddle-headed from an ideological point of view, but from the point of view of social stability, it isn't muddled at all," Li said. "They will crack down on anyone organizing at the grassroots level, whether it comes from the left or the right."

The students' detention came after police in Beijing on Wednesday detained Qiu Zhanxuan, former head of the Marxism study group, as he was heading to attend an anniversary event marking the birth of late supreme leader Mao Zedong.

Qiu was grabbed and forced into a black car outside the east gate of Peking University by a group of men who identified themselves as police, he said in a statement posted to the JWSG Github page.

As he set out to attend the anniversary event, Qiu found his messages on the popular social media platform WeChat were being blocked. He was then approached by officials of the Communist Party's Youth League, who tried to takehim down to the local police station, as demanded by police the day before.

"I fled all the way to the Peking University East Gate subway station. But there, I was suddenly surrounded by seven or eight men," Qiu wrote. "One of them ... grabbed my cell phone and kept me on a seat in the subway station. I was very nervous and panicked."

Eventually, the men identified themselves as officers from the police department of Beijing's Haidian district, where Peking University is located.

"After that, they carried me to the Dongmen Subway Station police station," he said. "Then several police officers forcibly searched me and took my mobile phone."

Police said he had been "verbally summoned" for questioning, but refused to show any paperwork to support this claim, Qiu wrote. At one point, he was slammed to the floor when he tried to visit the bathroom.

They interrogated him intensively over the next 24 hours, resulting in eight statements to police, Qiu said.

"During these interrogations, I repeatedly asked what laws I had broken, and the public security officers could not answer me," Qiu said, adding that he was told his studies "wouldn't be affected" if he stopped his Marxist activism.

Police were particularly concerned about an open letter submitted by Qiu and others to Peking University's vice president Wang Yanglin on Dec. 19, and accused Qiu of "disrupting public order" outside Wang's office. They had then handed down a series of "administrative punishments," he said.

Meanwhile, several other students who had planned to attend the anniversary event had been issued with compulsory summonses at the same time, Qiu said.

"These interviews and punishments are not only a means of stopping us from participating in the commemoration of Chairman Mao, but also intended to suppress the student members of the Marxism study group, to stop them from helping workers with their petitions [in labor disputes]," Qiu wrote, calling on the authorities to end the crackdown and apologize.

He said the authorities had hastily reconvened a "reorganized" Marxism study group and filled it with people unknown to previous members, who had never shown an interest in joining before.

Former Peking University professor Xia Yeliang, who now lives in the United States, said Qiu's detention and interrogation must have been ordered at the highest levels of the Communist Party.

"When there were labor problems in Shenzhen, [these students] supported them, under the banners of Marxism and Mao Zedong," Xia said. "This is what the authorities are most afraid of, because this is where the Communist Party itself started out."

He said the left wing of the ruling party is increasingly dissatisfied with the administration of President Xi Jinping.

"One important component of Marxism is the theory of class struggle, and also the idea that it is necessary to use violence to overthrow a political class, and to establish a new political power," Xia said.

"So the moment anyone starts using Marxism, the Communist Party will feel that this is a challenge to its authority."

The Chinese people party and Marxist students are two sides of the same coin because both are communists. It's clear to see that Marxist students will use the class struggle to get power. Exactly like Chinese commies did few years back.