Milk Dad 'Out On Parole'

Did Chinese authorities fabricate a statement from an outspoken milk scandal parent?
2010-12-28
Tweet 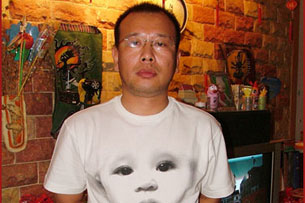 A Chinese activist who sought compensation for children sickened in the 2008 tainted milk scandal has apparently been released from detention, according to an online statement which said he had been freed out of concern for his health.

A message posted on a blog from Zhao's account Tuesday night said he had been released on "medical parole."

"I recognize the punishment handed down to me by the judicial departments, and I hope that people won't bring up this subject much with us now," the message said.

Neither Zhao nor his wife could be reached to confirm the note. An officer who answered the phone at the Daxing detention center in Beijing declined to comment. "I don't really know," he said.

But Jiang Yalin, a fellow activist and head of the civic group Kidney Stone Babies, said it was unclear whether or not the note posted on Zhao's blog had been written by him.

"We haven't seen him, alive or dead," Jiang said. "Under such circumstances we have no way to confirm whether it is genuine or fake."

"So many of us have had our passwords hacked ... and [Zhao's] computer was confiscated."

"I think the authorities are probably bowing to pressure from the outside world in approving medical parole," Ho said.

"But we should remember that [Zhao] is still technically serving a sentence ... and his right to appeal has been taken away," he added.

Zhao, who earlier vowed to fight his conviction, said he would go on a hunger strike and signed legal forms for an appeal.

But the activist fired his legal team last month, sparking speculation that the authorities would cut a deal with the parent activist, whose sentencing caused a public outcry.

Zhao's lawyer, Peng Jian, said he and fellow lawyer Li Fangping had received notification that they had been fired from detention center officials, rather than from Zhao himself.

Neither Zhao, 38, nor his wife, had given any reason for the decision.

Zhao was held in a Beijing detention center after being convicted of "creating a disturbance" through his advocacy activities.

Analysts said at the time that the sentence indicated authorities feared Zhao Lianhai could be a rallying point for opposition to the ruling Communist Party.

The government said after the 2008 scandal that it had destroyed all tainted milk powder, but reports of melamine-laced products have regularly re-emerged.

Reported by Peter Chung for RFA's Mandarin service and Fung Yat-yiu for RFA's Cantonese service. Translated and written in English by Luisetta Mudie.