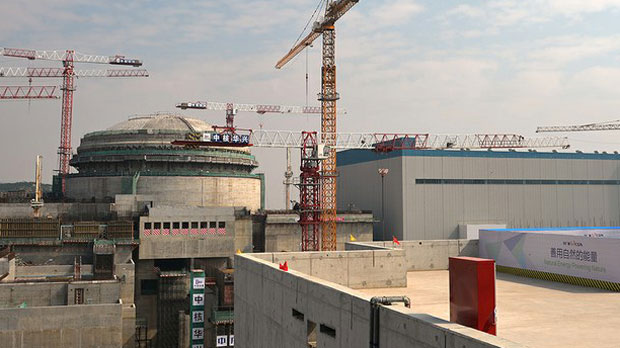 The U.S.$8.3 billion French-built nuclear reactor at Taishan on China's southern coast during construction in 2013.
AFP

China has resumed testing of a U.S.$8.3 billion French-built nuclear reactor at Taishan on its southern coast, according to a media report in neighboring Hong Kong.The U.S.$8.3 billion Taishan plant is among the first in the world to use European pressurized reactors (EPR) designed by French nuclear firm Areva, but has been plagued by delays and technical problems.Plant operator China General Nuclear (CGN) had previously postponed the opening of Taishan's Unit 1 from to 2017, but engineers said the plant still required a large amount of tests, and the earliest it could start was 2018.Hong Kong's crowd-funded investigative news agency FactWire reported at the end of last year that cracks had been found in some of the reactor parts.It said the authorities had decided to go ahead with a final test-firing of the reactor on June 6, without making the move public, however."This heralds the first formal operation of an EPR anywhere in the world," FactWire reported.It said the authorities had decided to go ahead with the first critical phase of the reactor in spite of cracks having been found in its cover."The reactor will now be used with the [problematic] reactor cover in place until April 2025," the report said. "In the meantime, methods will be developed for effectively checking the top cover while it is in use."It cited safety documents issued by China's Nuclear Safety Administration as saying that various mechanical and man-made problems had been identified prior to the first test run."Between May 22-25, the Nuclear Safety Administration conducted a nuclear safety inspection before Unit 1 went critical for the first time ... pointing out six issues," FactWire said.These included monitoring equipment failures, reactor protection system signal errors, as well as human error including operators not following correct procedure in response to system abnormalities.

Transparency questionsThe power plant was ordered to "strengthen operator skills training to reduce human error," and to resolve a host of other issues including random restarts by the computer controlling the reactor, and the failure to ensure that high radiation areas can be locked down.The plant's operators have yet to comment on FactWire's report.But engineer and sustainability campaigner Albert Lai, who convenes the Hong Kong think tank Professional Commons, said China's Nuclear Safety Administration is notorious for lacking transparency."Their transparency is very poor, and their relationship with China General Nuclear is too cosy," Lai told RFA on Monday. "Personnel are frequently posted between the two organizations, which compromises their independence.""[They] have kept a very low profile throughout the [Taishan] project from commissioning to production," he said. "[They] seem to take the attitude that's it's best not to inquire too closely.""The most worrying thing is whether they are putting commercial considerations ahead of public safety," Lai said.Lai said it remains to be seen whether any or all of the safety issues have been resolved since the safety inspectors published their report last month."Legally speaking, they have the power to order this reactor to shut down," he said. "It was highly irresponsible of CGN to fire up this reactor with no formal announcement, which would be the only way to comply with International Atomic Energy Agency guidelines."A resident living near the Taishan plant in Guangdong's Chixi township said he is concerned about safety at the plant."Since the government has allowed a nuclear power plant to be built nearby, they should solve any safety issues," the resident said. "This isn't something ordinary people like us can bother our heads with.""I would hope that the government will hold a formal press conference when the nuclear power plant starts generating electricity normally ... so that everyone knows what is happening," he said.Reported by Gao Feng for RFA's Mandarin Service, and by the Cantonese Service. Translated and edited by Luisetta Mudie.