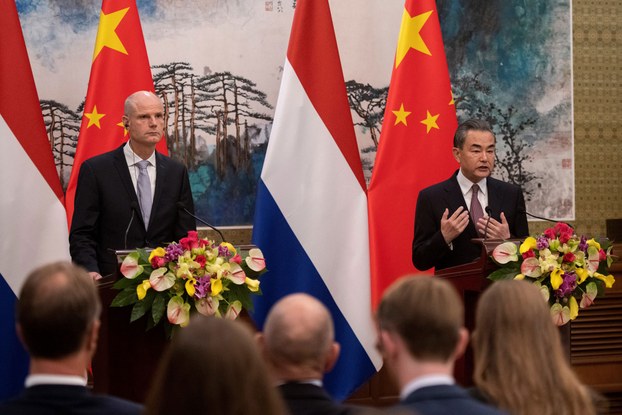 The Netherlands is calling on the European Union to speak out more strongly on violations of international law in the South China Sea.

That’s one of the key points in the new policy document issued by the Ministry of Foreign Affairs where it outlines its strategy for the Indo-Pacific region – what it describes as a “unique Dutch vision.”

The Netherlands is following the example of fellow EU nations like France and Germany who are putting fresh focus on Asia in recognition of China’s growing clout and the increasing trade ties between the region and Europe.

In the policy, issued Friday, China is given special attention, citing its aggressive economic expansion as well as its use of both civilian and military tools to achieve “strategic goals.”

The Netherlands singles out concerns over the South China Sea, noting how the burgeoning rivalry between the U.S. and China threatens the stability of the critical waterway. It calls for the Indo-Pacific not to become “a plaything between the great powers.”

Over a third of world trade passes through the South China Sea, most of which China claims sovereignty over. About $1.5 trillion in goods flow from Europe to Indo-Pacific markets, annually.

The 27-member EU is the second-largest trading partner of the Southeast Asian block, ASEAN, and the largest investor in it as well. ASEAN is comprised of 10 nations, and five of them – Vietnam, the Philippines, Malaysia, Brunei, and Indonesia – surround the South China Sea and have claims or maritime boundary that overlap with those of China.

Netherlands is one of the biggest exporters to ASEAN countries within the EU, behind Germany. The report notes 22.5 percent of total Dutch imports come from Asian countries.

“The EU should seek cooperation with countries in the region for free passage and guarantee maritime safety,” the policy says. “In that context, the EU must express itself more often and more strongly on developments in the South China Sea that violate the United Nations Convention on the Law of the Sea.”

The Convention, also called UNCLOS, provides the basis for the legal regime governing the world’s oceans. An arbitral tribunal in 2016 ruled that most all of China’s claims in the disputed waters of  the South China Sea were illegal under UNCLOS, and China has been criticized by countries such as the U.S. and Australia for flouting international law ever since.

China has been aggressive about asserting its claims in the South China Sea, often sending coastguard ships and maritime militia vessels into other countries’ waters there. It has also upped the tempo of its military drills in the region, with the latest taking place at the northernmost end of the South China Sea throughout the week.

Meanwhile, the United States has run a series of its own military drills in the South China Sea, and is currently in the midst of Malabar 2020 exercises with India, Japan, and Australia – the so-called “Quad” of Indo-Pacific democracies – in the Indian Ocean.

In a letter to parliament on the new policy document, Dutch Foreign Minister Stef Blok references the Indo-Pacific policies set out by France and Germany and says the new Dutch policy was prepared in anticipation of “an Indo-Pacific vision in a European context” that would presumably be a common EU position on the region.

European nations have taken a more critical view of China recently, although opinion is far from uniform. A new survey of European countries from the Bratislava-based Central European Institute of Asian Studies found that views of China are overwhelmingly negative, with respondents from 10 out of the 13 countries surveyed having mostly unfavorable opinions of China and its behavior. Germany, France, the United Kingdom, Sweden, and Czech Republic led the pack.