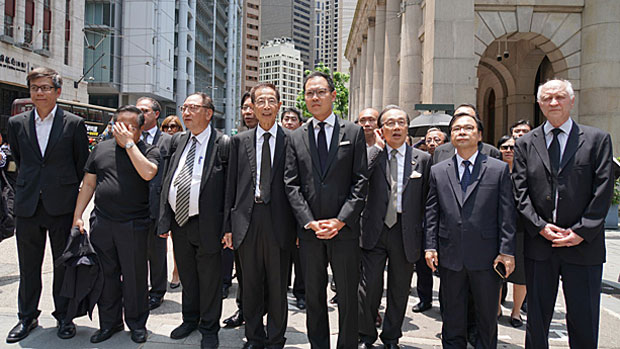 Thousands of members of Hong Kong's legal profession took to the streets on Wednesday in a silent march of protest against the political arrests of hundreds of anti-extradition protesters since the movement began two months ago.

Barristers, solicitors and trainees marched alongside more prominent members of the profession, including Martin Lee, founder of the city's Democratic Party.

Some wore respirator masks and yellow construction helmets in solidarity with frontline protesters who have faced down more than 1,800 rounds of tear gas and dozens of rubber bullets since the movement took to the streets in early June.

Police have arrested some 200 people aged from 13 to sixty-something on charges of "rioting" and "illegal assembly," "carrying an offensive weapon" and "assaulting a police officer."

In an action that was described by senior counsel Denis Chang as a "silent scream" for justice, they marched from the Court of Final Appeal to the Department of Justice, where they waited for an hour in the hope of speaking to Secretary for Justice Teresa Cheng. But no meeting took place.

Lawyer and lawmaker Dennis Kwok said the profession had a duty to call into question political prosecutions.

"The DoJ's decision to prosecute has been made in a completely biased way, favoring one side of the argument, and with no justification whatsoever," Kwok said. "It will only deepen the current divide in Hong Kong and sow hatred."

"Nobody wants to see the situation on our streets continue to escalate, so we have a duty to come out today and call for a political resolution to a political problem," he said. "The only solution is to withdraw the evil extradition law amendments and to set up an independent inquiry."

Meanwhile, former lawmaker and lawyer Margaret Ng warned that political prosecutions would undermine the rule of law in Hong Kong.

"One of the most important things about the rule of law is that a prosecution must not be abused ... if abused, it is the most powerful instrument of oppression," Ng told the gathering.

The Department of Justice issued a statement saying prosecutions are always carried out in a fair and impartial manner.

"The DoJ will not handle the cases differently due to the political beliefs or background of the persons involved," it said.

A law student in a face mask and helmet said he was genuinely concerned for his safety, given the level of police violence against protesters.

"Actually, wearing helmets and masks is a way to express a kind of fear, because such defensive equipment has become necessary," the trainee said. "We never know when we could be attacked by the police, so it's better to protect yourself."

As the lawyers marched in Hong Kong, ruling Chinese Communist Party officials were meeting with pro-Beijing politicians across the border in Shenzhen.

Zhang Xiaoming, the director of the Hong Kong and Macao Affairs Office under China's cabinet, the State Council, said the anti-extradition movement was similar to a "color revolution," local media reported.

He told the meeting that now was not an appropriate time to set up an independent inquiry, one of the five key demands of the anti-extradition movement, but that the government should focus on ending the "violence and chaos."

Meanwhile, students gathered in an angry protest over the arrest of Hong Kong Baptist University student union leader Keith Fong, who was arrested on Tuesday night for carrying 10 laser pointers, often used by protesters to point at police in full riot gear.

More than 40 members of the university's faculty issued a statement calling for Fong's unconditional release, while thousands of people gathered to shine laser pointers at the Space Museum after police tried to demonstrate the alleged danger of the pointers by attempting to burn a newspaper at the news conference.

Shouting "Why doesn't it burn?" and "I want my money back!" the protesters sought to ridicule the police claim that a common piece of office equipment could be an offensive weapon.

"The police have arrested a Hong Kong citizen based on his acquisition of a common commodity," the Baptist University lecturers said. "This reveals that the police have abused their power and have made arbitrary arrests in an out-of-control manner."

University president Roland Chin was met with boos and heckles by students after he met with police on Wednesday morning and asked them to treat Fong and another arrested Baptist University student fairly.

Democratic Party lawmaker Helena Wong said the comments reported from the meeting in Shenzhen showed that nothing has changed in Beijing's approach to the anti-extradition movement, and that the ruling Chinese Communist Party still supports the administration of chief executive Carrie Lam.

"They still want to support Carrie Lam and the police in their enforcement of the law, which I think will only exacerbate the situation," Wong said. "The police will now likely step up their abuse of power under that degree of pressure."

"As for whether they will send in the People's Liberation Army (PLA), they don't seem to think that would be an issue, even though it would do great damage to Hong Kong," she said. "It's not going to yield any kind of positive result or stability for the people of Hong Kong."

Reported by Wong Lok-to, Lau Siu-fung and Wen Yuqing for RFA's Cantonese Service, and by Qiao Long for the Mandarin Service. Translated and edited by Luisetta Mudie.