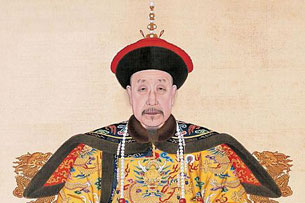 The Qianlong Emperor, the fourth Manchu emperor to rule over China.
Wikipedia

The language of China's last emperors, which acted as a vehicle for high culture for more than 300 years, is on the verge of extinction, spoken now only by a handful of elderly people in the rural northeast, experts warn.

"People who still speak the Manchu language are now confined to a few elderly people in a small number of rural villages in northeastern China," said Zhao Zhiqiang, who heads the Manchurian Research Institute at the prestigious China Academy of Social Sciences (CASS).

While more than 100 million people in China are currently classified by the government as Manchurian in ethnicity, almost none of them speaks their ancestral tongue.

Manchu, once the official language of the Qing Dynasty (1644-1912), lost its political weight with the dynasty's fall, triggered by the 1911 revolution led by Sun Yat-sen.

But experts have warned that a knowledge of the tongue is crucial for anyone wanting to carry out research into the Qing period of Chinese history.

"A lot of so-called secret documents were written in Manchurian during the Qing dynasty," said Zhou Zehao, professor of information science at Pennsylvania’s York College.

"All the classified documents were written in it." 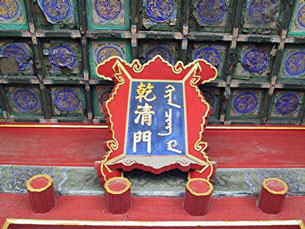 A sign using both Manchu and Chinese writing in Beijing's Forbidden City. Credit: Wikipedia Wikipedia
According to Zhou, the entire Qing bureaucracy was run as a bilingual system which used Chinese and Manchurian in its record-keeping.

"Every important document had both a Manchu and a Chinese version," Zhou said.

"The Manchu language is crucial to an understanding of the history of the Qing dynasty."

The Manchurians also had an impact on the language of the Koryo civilization on the Korean peninsula, and on the Mongolian and Uyghur languages, Zhou added.

A woman surnamed Sun with Manchu ancestry from northeast China said that the Manchus had promoted the development of Han culture, possibly to the detriment of their own, making a 21st century revival even less likely.

"They didn't promote it even while they were the emperors," Sun said. "So of course today it's even more difficult to do that."

"They used to practise Manchu, but I almost never hear them speak it nowadays," she added.

Experts estimate that fewer than 70 people now speak Manchu, a Tungusic language. A further 40,000 people in far western Xinjiang speak Xibe, which is in many respects the same as Manchu, although the Xibe ethnicity is considered distinct from that of Manchurians.

Linguists say that Manchu is derived mostly from the Jurchen language of 12th and 13th century northeastern China.

Written in a top-to-bottom flowing vertical phonetic script taken from the Mongolian alphabet instead of in pictographic characters like Chinese, Manchu also contains many loan words from Mongolian and Chinese.

The Mongolian script has been taught in primary schools to ethnic Mongolian children in China, following a brief experiment with the Russian Cyrillic alphabet before the Sino-Soviet split of 1961.

Reported by Yang Jiadai for RFA's Mandarin service. Translated and written in English by Luisetta Mudie.