China 'Makes no Promise' Not to Invade Democratic Taiwan 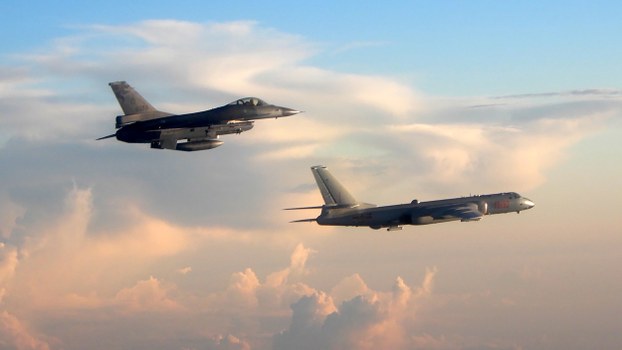 A Taiwanese F-16 fighter (L) jet monitors one of two Chinese H-6 bombers that flew over the Bashi Channel south of Taiwan, near Japan's Okinawa Island, May 25, 2018.

"We make no promise to renounce the use of force, and reserve the option of taking all necessary measures," the official English translation of the white paper said. "The PLA will resolutely defeat anyone attempting to separate Taiwan from China and safeguard national unity at all costs."

The paper echoed a Jan. 2 speech by President Xi Jinping, who said Taiwan must be "unified" with China.

Taiwan president Tsai Ing-wen has repeatedly responded that Taiwan's 23 million population have no wish to give up their sovereignty.

It has never been controlled by the Chinese Communist Party, nor formed part of the People's Republic of China. The Republic of China is already a sovereign and independent state which controls the islands of Taiwan, Penghu, Kinmen and Matsu.

"The fight against separatists is becoming more acute," China's defense white paper said. "They have gone further down the path of separatism by stepping up efforts to sever the connection with the mainland in favor of gradual independence, pushing for de jure independence, intensifying hostility and confrontation, and borrowing the strength of foreign influence."

It said the island could expect continued fly-pasts and challenges to its air-space and national waters.

"By sailing ships and flying aircraft around Taiwan, the armed forces send a stern warning to the 'Taiwan independence' separatist forces," the white paper said.

Tsai's presidency has been marked by her intention to win back Taiwan's seat at the United Nations, and push back against the Chinese Communist Party's attempts to isolate the country on the world stage by putting pressure on diplomatic partners to vote against its participation.

Taiwan's Mainland Affairs Council (MAC), the part of Taiwan's executive branch of government that deals with relations with Beijing, issued a statement protesting the white paper on Wednesday.

"We firmly oppose and condemn the Beijing authorities for using the cross-strait issue to expand military martial arts and threaten to use force against Taiwan," the MAC said in a statement on its website.

"The provocation of the [Chinese Communist Party] not only impacts cross-strait peace, but also seriously violates the principles of peace in international law and international relations, and challenges the regional security order, causing anxiety and anxiety in neighboring countries," it said.

"The biggest threat to peace and regional stability in the Taiwan Strait is that the CCP has never [renounced the use of] military force to commit crimes," it said.

Taiwan military spokesman Shih Shun-wen said the white paper is part of Beijing's propaganda campaign to downplay the "China threat theory," and to allays concerns about its growing military assertiveness.

It said the white paper also seeks to justify China's military expansion in the region.

Taiwan's national security agency has repeatedly warned of growing attempts to flood Taiwan with propaganda and disinformation ahead of presidential elections in 2020, and to infiltrate its polity using Beijing-backed media and political groups.

Ruling Democratic Progressive Party (DPP) lawmaker Wang Ding-yu said the country is doing all it can to guard against growing attempts at political infiltration and influence by the Chinese Communist Party's United Front Work Department in Taiwan.

"We will check whether there are any leaks," Wang said. "At present, we must also have in our sights and pay close attention to the "red media" and their agents."

"We will be paying particular attention to the insurance industry, but we will deal with it within the limits of the law," he said.

The United States is planning to sell more than U.S. $2 billion worth of weapons and military hardware to Taiwan.

Items on the shopping list include 108 General Dynamics Corp M1A2 Abrams tanks, as well as anti-tank and anti-aircraft munitions, the report said.

While Washington broke off diplomatic ties with the 1911 Republic of China on Taiwan, recognizing the Beijing government instead, the 1979 Taiwan Relations Act (TRA) provides for continued cultural and economic ties, as well as military assistance for self-defense purposes, subject to approval from the President and Congress.

The move comes after repeated calls from Tsai Ing-wen for more support from Washington for the island's 23 million residents, who have scant interest in being annexed by China's ruling Chinese Communist Party.

Taiwan began a transition to democracy following the death of Chiang Kai-shek's son, President Chiang Ching-kuo, in January 1988, starting with direct elections to the legislature in the early 1990s and culminating in the first direct election of a president, Lee Teng-hui, in 1996.

Reported by Wen Yuqing for RFA's Cantonese Service, and by Hsia Hsiao-hwa for the Mandarin Service. Translated and edited by Luisetta Mudie.

Taiwanese politicians are all crap, from Lee Teng Hui to Chen Shui Bian to this latest witch, Tsai Ing Wen. ALL of them talked about independence but none dared to declare formal independence when in power. This is proof that Taiwan can only talk about independence and not real independence because they all know that the USA is too chicken to support a declaration of formal independence by Taiwan and it will lead to an eventual nuclear war should they decided to go ahead with it. The US has better things to do than to gain independence for Taiwan. Taiwan is being used by the US as a pawn to further US interests in East Asia.

China is bluffing when they warn of invading Taiwan. United State is fully behind Taiwan and its people against any unilateral aggression. Any invasion in Taiwan will earn the wrath of United States, and China will be meet with fire and fury by the world's lone superpower. Giving the Iron lady at the helm of Taiwan's government, China dare not attack, as Taiwan has all the means to defend its sovereign territory. As the saying goes, a barking day never bite.