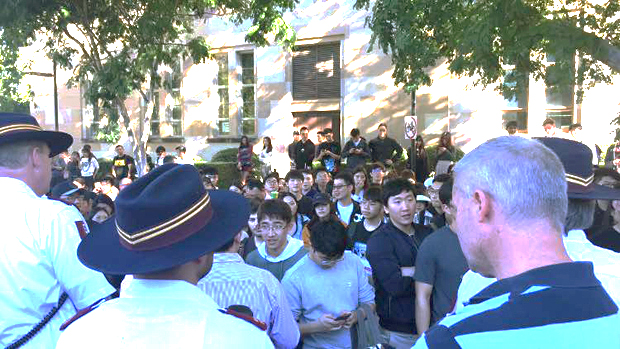 Students protest against China at the University of Queensland in Brisbane, July 24, 2019.
RFA listener

Threats from the Chinese authorities aimed at a mainland Chinese student who supported Hong Kong's anti-extradition movement during a campus protest in Australia have sparked further concern over Beijing's overseas influence campaign.

The family of a Chinese student who participated in protests at the University of Queensland in Brisbane was warned by the authorities of the potential consequences of political dissent, the Sydney Morning Herald newspaper reported this week.

"The apparent intimidation tactics suggest the Chinese government was monitoring the demonstration at the University of Queensland to record who attended," the paper said.

The student, who took part in a show of support for anti-extradition protests in Hong Kong and to condemn Beijing's repression of minority Muslim ethnic groups in Xinjiang, told the paper that his mother had warned him not to attend any more gatherings.

It said other students who attended the protests had also complained of intimidation and harassment online, including death threats.

Feng Chongyi, associate professor in China Studies at Sydney's University of Technology, said the reports were in keeping with the Chinese Communist Party's operating methods among Chinese groups overseas, including students.

"This could mean they they are using informants ... not necessarily professional spies, to report things of benefit to them," Feng said. "Some of the Chinese students will voluntarily take on the job of reporting on students and monitoring their mental state."

"They don't just report on students, but also on their teachers," he said.

The law was widely seen as a way to address concerns over growing Chinese influence in Australian political and intellectual life.

"It was a transparency law for foreign agents, which means that if you do political work on behalf of foreign governments without registering, you are breaking the law," Feng said.

Wu Lebao, a Chinese student currently studying in Australia, said that mainland Chinese political infiltration is now widespread in the country's colleges and universities, with certain student organizations believed to be funded by the Chinese government.

"I don't believe that they are independent Chinese student organizations, as they claim," Wu said. "They are completely controlled by the Chinese Embassy."

"They will report any anti-China speech to the Chinese Embassy."

While the University of Queensland said the university wouldn't tolerate behavior that impeded freedom of speech, Wu said students from the People's Republic of China are too lucrative a source of income for overseas universities to crack down on such attempts to influence public debate.

In April, U.K. lawmakers called on the government to "recalibrate" its China policy in the light of the power held by President Xi Jinping, who began an indefinite term in office in March 2018.

In a report titled "China and the Rules-Based International System," the House of Commons foreign affairs committee said that China does not intend to reform the rules-based international system "but rather intends to subvert it, by promoting an alternative version of human rights which stresses economic development at the cost of the universality of individual civil and political freedoms."

The Chinese Communist Party's United Front Work Department is tasked with developing allies and influence outside party ranks, including overseas, and has been linked to a number of reports on growing Chinese influence in liberal democracies.

Reported by Ng Yik-tung and Man Hoi-tsan for RFA's Cantonese Service, and by Gao Feng for the Mandarin Service. Translated and edited by Luisetta Mudie.

The Chinese communist party will do everything it can to spy on Chinese students abroad or at least on those who don't behave according to the party's line. The ones who refuse to cooperate would be threatened or their families back home would be under pressure from the Chinese police. It's an old technique used by the CPP over and over again.Things have become obvious that sooner or later red Chinese would send the army to suppress demonstrations in Hongkong. People of Hongkong you deserve better. You deserve democracy and freedom ! The whole world is watching.