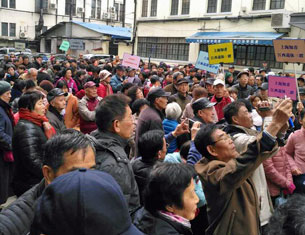 Chinese who are former "urban youth" sent down en masse to the countryside during the Cultural Revolution demonstrate over poor social security and health care entitlements outside the civil affairs bureau in Shanghai, Dec. 14, 2016.
Photo courtesy of demonstrators

Former "urban youth" sent down en masse to the countryside by late supreme leader Mao Zedong during the Cultural Revolution (1966-1976) have lodged a mass petition in Shanghai over low pension payments.

Around 1,000 people who were sent during the decade of political violence and turmoil to rural communities to do hard physical labor in the countryside demonstrated outside the civil affairs bureau in Shanghai on Wednesday.

They are complaining that the years they spent outside the city left them far poorer in terms of social security and health care entitlements, and that they are still paid pension at a level appropriate to rural areas, rather than reflecting their status as residents of one of the world's most expensive cities.

While some went down to the countryside voluntarily, in response to a mass movement launched by Mao, others were forced to go by their local authorities.

Many lost any chance of attending university as a result.

Former "urban youth" Qiu Bei told RFA that the group has been struggling for recognition of its grievances for years, but they were met by dozens of police officers when they attended Wednesday's protest.

"I think there were more than 1,000 people there, holding up placards and shouting slogans," Qiu said. "Some people even had loudhailers."

"There were more than 100 police there in uniform; I don't know how many plainclothes police were there," he said.

He said police hadn't taken any action against protesters, in spite of local rules forbidding banners and placards, slogan-shouting or singing at petitioning events.

"The police made no move, but there were a large number of plainclothes cops interspersed among the crowd," he said.

"Nobody came out from the civil affairs bureau to meet with us," he said.

Fellow protester Zhang Weimin said she has been fighting for years to get a decent pension that covers her basic expenses.

"We are all former urban youth from various places, but the money we are paid from those places isn't enough in Shanghai," Zhang said.

"According to the rules, our household registration should indicate that we are from Shanghai," she said.

China's hukou system has been widely criticized for creating a socioeconomic pecking order for cities, with those at the top receiving the lion's share of resources and the best social welfare provision.

A household registration document is issued in the town of a person's birth, and anyone without it is excluded from social subsistence and healthcare reimbursement schemes.

But many of the former "urban youth" are currently being treated as if their hukou is in the place where they went during the Cultural Revolution.

"We should be able to enjoy some security in our later years, and enjoy life at home," Zhang said. "Why are we coming here in such cold weather? We have no other choice. We're not trying to create unrest; we are struggling to survive."

A local resident surnamed Wang said many of the urban youth had given up their dreams and dedicated themselves to hard labor for the socialist cause.

"They have been complaining about this for a long time but to no avail; nothing has happened," Wang said. "They were all 18, 19, 20 years old back then, and they were sent by the authorities to the countryside to do hard labor."

"They have suffered a lot," he said. "I hope the government handles this issue properly."

Reported by Ding Wenqi for RFA's Mandarin Service. Translated and written in English by Luisetta Mudie.