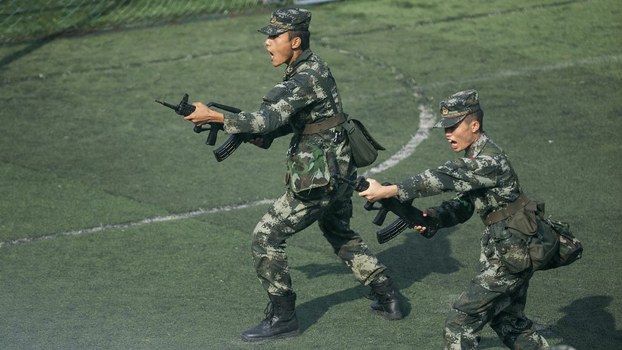 China on Friday warned of a political clampdown in Hong Kong as anti-government protests entered their fifth month, hitting out at "foreign interference" in the city's affairs and hinting at further plans to educate the city's seven million residents to be more "patriotic."Shen Chunyao, director of the Hong Kong and Macau Affairs Office, was commenting after the ruling Chinese Communist Party pledged that it would "establish and strengthen a legal system and enforcement mechanism for safeguarding national security" in Hong Kong."We absolutely will not permit any behavior encouraging separatism or endangering national security," Shen told reporters on Friday."[China] will resolutely guard against and contain the interference of foreign powers in the affairs of Hong Kong and Macau and their carrying out acts of separatism, subversion, infiltration and sabotage," he said.China has repeatedly accused foreign governments of interference in Hong Kong after some hit out at police violence meted out to protesters and called on the city's government to heed protesters' calls for more democracy and the continuation of the city's traditional freedoms, as promised in a 1984 treaty governing the handover from the U.K. to China in 1997.Shen said Beijing wants to see "patriots to form the main body" of those selected to govern both Hong Kong and Macau, and that there are plans afoot to "perfect" the system for selecting the chief executive and officials.Beijing Wednesday expressed "approval and support" for the disqualification of Hong Kong democracy activist Joshua Wong from upcoming local elections on the grounds that his political views would prevent him from upholding the city's mini-constitution, the Basic Law.Wong, one of the most prominent figures in the 2014 pro-democracy movement, said the decision was "politically driven" and that he had been disqualified because of who he is.Learn about the constitution

Shen said Hong Kong officials and teenagers should learn about the constitution, as part of an educational program aimed at "strengthening the national consciousness and patriotism of Hong Kong and Macau compatriots through the education of history and Chinese culture," he said.

It is fears about a proposal to extradite citizens from Hong Kong, who are accustomed to rule of law under an independent judiciary, to face the communist mainland's opaque and politicized justice system that sparked the protests earlier this year. Even though the Hong Kong government has withdrawn the extradition bill, the protests have morphed into broader demands for democratic reforms, including universal suffrage.  Shen's comments came as the number of arrests made by police since protests escalated in early June topped 3,000, and amid ongoing criticism of the use of tear gas, rubber bullets and pepper spray by riot police against people on Hong Kong's streets.Several reports emerged that police had pepper-sprayed Halloween revelers in the face as they sought to clear the popular night spot of Lan Kwai Fong in the downtown Central business districts of crowds, saying bar-goers and mask-wearers were participating in an "illegal assembly."Claudia Yip of the Hong Kong Human Rights Monitor group said the police use of pepper spray had exceeded international principles of "minimum necessary force" for crowd control."We saw a number of individual cases of the police abuse of power, and a lot of people were injured," Yip said. "The police must respect the principle of minimum necessary force, which applies both internationally and in Hong Kong.""There are two principles at work here; that of necessity and that of proportionality," she said. "In the incidents last night we saw police talking to people and then just spraying them with pepper spray, which doesn't meet guidelines for the use of force."The group's spokesman Icarus Wong said the incidents witnessed by the group indicated that the police were unable to control their emotions."Police are only supposed to use force when somebody attacks them, and that might include pepper spray, but exchanging words with police, even if there is a verbal dispute, doesn't constitute grounds for spraying somebody with pepper spray," Wong said.'Zero' performance appraisal

Wong said there was also an incident where police sprayed journalists with pepper spray while making several arrests.Police said on Friday they had arrested 175 males and 74 females aged 13 to 64 since Monday, bringing the total number of arrests linked to the protest movement to more than 3,000.A recent opinion survey carried out by the Institute of Asia Pacific Studies at the Chinese University of Hong Kong showed that most respondents thought chief executive Carrie Lam had failed to do her job properly, while 32 percent gave her "zero" in an appraisal of her performance.More than 66 percent of 700 respondents expressed "dissatisfaction" with Lam's administration, compared with 33 percent in the same period last year.More than 55 percent said they distrust the Hong Kong government, with only 16 percent saying they trusted it.Reported by Lau Siu-fung for RFA's Cantonese Service. Translated and edited by Luisetta Mudie.

It is the CCP who should study the PRC Constitution & HK's Basic Law because it is the CCP which is violating both by denying Hong Kong genuine democracy & autonomy. There is a legal & social contract between CCP & Hong Kong. If the CCP won't keep its promises for democracy & autonomy when why should HK people comply with unconstitutional mandates from the govt? The CCP launched its own revolution in China in the 1940s. Why should HK not rebel when the CCP engages in tyranny?

Many of my middle class and professional friends are planning to emigrate especially for their children.