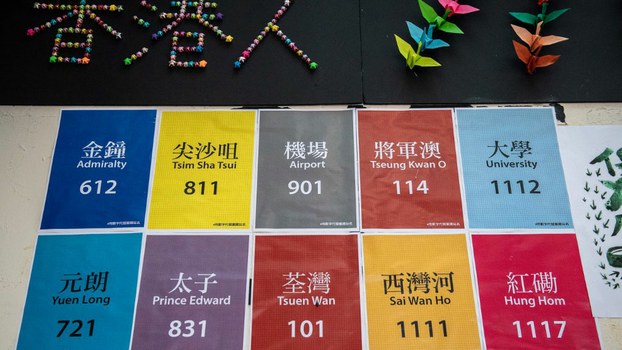 Posters referring to various protest-related dates and incidents since June 12 are seen at a "Lennon Wall" in North Point in Hong Kong, Dec. 2, 2019.

A bid to impeach Hong Kong chief executive Carrie Lam in the city's legislature came to an end on Thursday, after it failed to win enough support from lawmakers across the political spectrum.The impeachment motion moved by the pro-democracy camp in the Legislative Council (LegCo) was rejected after a vote of 26 for to 36 against.Current rules require an impeachment motion to garner at least half of votes both from lawmakers returned by direct elections from geographical districts and at least half of those chosen by industries and professions to represent them in LegCo.While more than half of lawmakers supported the motion, it failed to win more than half of the members elected through functional constituencies.The impeachment bid came amid a growing chorus of criticism of Lam, with pro-democracy lawmakers saying she has condoned police violence and failed to respond to public grievances, leading to the current impasse between protesters and the authorities.Starry Lee, chairwoman of the biggest pro-Beijing party, the Democratic Alliance for the Betterment and Progress of Hong Kong (DAB), also took aim at Lam's failure to withdraw a widely hated proposal to allow extradition to mainland China as soon as the extent of public opposition became clear.Pro-democracy lawmaker Gary Fan accused Lam of running Hong Kong with a consensus forged between Hong Kong officials, pro-China lawmakers and the police, and locking out the city's 7.4 million people."As long as this retinue of obedient officials, the royalist [pro-Beijing] clique controlling this Council, and police force equipped with a vast array of weaponry continues to support each other, then the government will continue to act recklessly and betray the will of the people," Fan said."Lam and her administration are responsible for the violent crackdown on the people of Hong Kong," he said.Accountability

Democratic Party lawmaker Roy Kwong called for police officers to be held accountable when they commit acts of violence against the public."If you do something wrong, you will be punished, but not a single police officer has been penalized up to now, have they?" Kwong said. "The fact that there is no accountability when someone does something wrong is very depressing for many Hong Kong people."DAB chairwoman Starry Lee hit out at Lam for failing to communicate in a timely manner, thereby allowing the public mood to escalate."The government ... hasn't clarified queries and suspicions in a timely manner, and has left a large number of unproven rumors to ferment and cause fear," Lee said. "The government still hasn't woken up: it just keeps repeating its stance and letter the rumors get wilder and wilder, which ultimately distorts and dumbs down the entire work of LegCo."Lam eventually withdrew the legal amendments that would have allowed extradition to mainland China, but protesters also want fully democratic elections to LegCo and for the post of chief executive, an amnesty for the thousands of people arrested since protests began, an end to the use of the term "rioting," and an independent inquiry into police violence.Lam and her officials have repeatedly ruled out meeting any of the other demands.Meanwhile, her administration has responded to growing concerns that the police's use of copious amounts of tear gas in recent months could pose a threat to public health by saying that fumes from barbecues were likely more harmful.Police have fired more than 10,000 rounds of tear gas since early June, but officials have refused to publish the chemical composition of the weapons it is using on the streets.Police gave permission for a march organized by the Civil Human Rights Front (CHRF) to go ahead on Sunday, to mark international Human Rights Day.But police said organizers the CHRF must take "reasonable and appropriate measures" to ensure the event is orderly and remains within the law, including not desecrating any national flags.Reported by Man Hoi-tsan for RFA's Cantonese Service. Translated and edited by Luisetta Mudie.