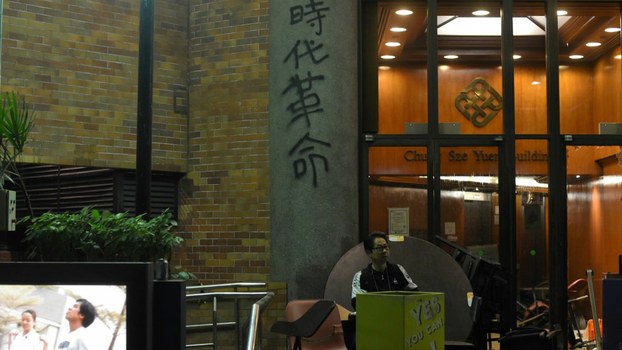 A staff member sits inside the campus of the ransacked Hong Kong Polytechnic University in Hong Kong, Nov. 29, 2019.

Hong Kong police on Friday ended their siege of the Polytechnic University after removing explosive materials and makeshift weapons left behind by frontline protesters.

Police said they found 3,989 petrol bombs, 1,339 explosive items, 601 bottles of corrosive liquid and 573 weapons at the site, before handing control of the premises back to university management at around noon.

Police public relations chief Superintendent Kwok Ka-chuen said he hoped the peaceful end to the standoff would be a "turning point" in the protest movement.

"The Poly U incident shows that these conflicts can be resolved without bloodshed," Kwok said. "It has also proved the people of Hong Kong ... can solve problems and resolve crises rationally."

But the university's president Teng Jin-guang said that management would impose tighter security measures on campus from now on.

"We are going to substantially enhance our entrance access control. So we will only allow staff, students and authorized people to come into the campus," Teng said.

The Poly U clashes came as riot police deployed huge numbers of tear gas canisters, water cannon, armored cars and rubber bullets in a bid to gain entrance to the campus.

Protesters inside built makeshift barricades and fired back Molotov cocktails and other projectiles using home-made catapults of the kind once used in medieval castle sieges, at one point setting fire to an armored car that was advancing across a footbridge.

Ken Woo, acting president of the Poly U student union, said the siege had changed students' perceptions of their university.

"We used to think that university was the safest place, and the police wouldn't enter it by force," Woo said. "But after a few weeks [of protests] they started just walking in to look for evidence, and got used to doing that."

The university was still littered with the debris of fierce clashes between besieging riot police and protesters preventing them from getting inside that took place earlier this month.

The now-familiar debris of the five-month-old popular resistance movement that is still calling for more democracy and protesting the loss of Hong Kong's freedoms lay strewn about: broken glass, umbrellas, masks, helmets and water bottles.

Protesters had also daubed anti-police and anti-government slogans on the walls and floors, but all appeared to have left the campus by the time police came in.

Meanwhile, office workers took to the streets of Cheung Sha Wan, Taikoo and the Central business district on Friday, continuing the theme of celebration after the United States passed a law that could see local officials found to have breached human rights and political freedom hit with visa sanctions and asset freezes by Washington.

Protesters, most of whom were in regular work clothing, blocked highways and chanted "Free Hong Kong! Revolution in our time!" and "No rioters, just a violent regime!"

Police displayed warning signs saying that the gatherings were "illegal assemblies," but protesters had already begun to leave by then.

Protesters in Central called for an end to police violence against protesters.

Last week, an international medical journal hit out in an opinion article at the detention of doctors, paramedics, and first-aid personnel by riot police during the Poly U siege.

In the U.K.-based medical journal The Lancet, independent medical practitioner Darren Mann--a member of a medical team providing emergency care to injured protesters engaged in violent confrontation with police at Poly U on the night of Nov. 17--hit out at the arrest of healthcare personnel by riot police.

Rights groups have also criticized the Hong Kong authorities for fueling violence with excessive force in their treatment of protesters, as well as limiting and prevent legitimate and non-violent protest and assembly since the anti-extradition movement took off in early June.

They have called on police to refrain from using disproportionate and deadly force, but police have repeatedly reviewed their own tactics and found them to be "appropriate."

The government is also facing growing calls to limit the use of tear gas, a chemical weapon under international military classification, in densely populated city streets, where families are often left choking even in their own homes, or while eating in restaurants.

Campaigners have also demanded that police make public the provenance and chemical composition of the tear gas they use, to enable medical practitioners to formulate treatment plans accordingly. But police have refused, saying that doing so could compromise their operations.

The United Nations and other governments have expressed growing concern, calling on the administration of chief executive Carrie Lam to de-escalate the situation.

Lam has offered dialogue, but protesters have ruled out talking to the government until their demands are met.

The government has withdrawn legal amendments that would have allowed extradition to mainland China -- a plan that sparked the movement in the first place -- but protesters also want fully democratic elections to the Legislative Council (LegCo) and for the post of chief executive, an amnesty for the thousands of people arrested since protests began, an end to the use of the term "rioting," and an independent inquiry into police violence.

Lam and her officials have repeatedly ruled out meeting any of the other demands.

Go on people of Hongkong ! It's not over yet and red Chinese want to run over you again. I suspect they're going to send army and tanks in Hongkong.