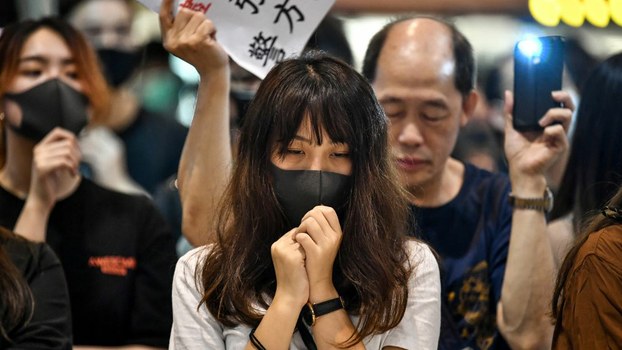 Protesters gather in a shopping mall at Ma On Shan in the New Territories of Hong Kong on Oct. 9, 2019.

Hundreds of people staged a protest at a shopping mall in Hong Kong on Wednesday after police arrested five of its security guards for trying to stop police officers from entering the building to arrest protesters.Five men and two women aged 28 to 62 were arrested in the MOSTown shopping mall in Ma On Shan district after the guards tried to prevent officers from entering the privately owned mall, saying they didn't have a warrant.Police said they were responding to a report of vandalism at the mall and didn't need a warrant to enter the building.But pro-democracy lawmaker Alvin Yeung said police aren't allowed to enter private premises just to see who is around. "They have to have a clear idea who they want to arrest," said Yeung, who is a lawyer by training.Several hundred people gathered at MOSTown mall, demanding the guards' immediate release and calling on the administration of chief executive Carrie Lam to disband the police force.The arrests came amid widespread public anger at the Mass Transit Railway (MTR) over its compliance with police operational requirements in recent weeks.The MTR implemented a city-wide shutdown of its stations last weekend, reserving train services and shuttered stations for the use of police officers seeking to crack down on protesters, prompting multiple acts of vandalism by an angry public.And police on Wednesday admitted that unidentified black-clad men inside the Sheung Shui MTR station -- who shone flashlights into people's faces and refused to answer questions about who they were -- were police officers.Video footage of an altercation with a local resident and one of the men was posted to social media. In the clip, the resident asks why the flashlight is of a similar kind to those used by police."This masked gentleman; I can't tell his identity," the resident says. "Why is he allowed to stay behind in the MTR station when the gates are shut?"Man in black

In a separate video clip, an unidentified man in black brandishes a can of pepper spray in the face of a local resident, and refuses to answer questions about whether he is an employee of the MTR.A police spokesman said police are using "a variety of methods" to enforce the law, and denied claims that police had deliberately vandalized the station to make it look like the work of protesters.Pro-democracy lawmaker Gary Fan said he wasn't convinced, however."This sows very reasonable suspicions among the public, that the police were destroying the station facilities and saying it was the protesters," Fan said.Suspicions have been further fueled by social media posts apparently showing that MTR ticket machines covered up by stickers claiming they were out of order "due to vandalism" were in fact functioning normally underneath the stickers.The mass closures of the MTR have amounted to an unofficial curfew in recent days, as widespread roadblocks make traveling by car or bus more time-consuming in a city where a large proportion of its seven million residents rely on public transport to get around.The MTR had previously remained open in the early months of the protests, and even laid on special trains to allow large numbers of protesters to leave a protest site quickly.But its policies shifted at the end of August, making the corporation a target for radical protesters, and anyone trying to impersonate them.MTR operations director Adi Lau said the MTR had only taken the decision to close stations after 120 MTR and light rail stations were damaged in the protests."Protesters have disrupted normal railway operations in a number of ways, from spraying graffiti in stations, to destroying the entry and exit gates of individual stations, to the recent destruction of a large number of station facilities," Lau said."There are no more replacement parts left for some of the equipment," he said. "It was a very difficult decision to close the stations, but the MTR had no choice but to protect the safety of passengers."'Proactively working with police'

But Fan said the level of vandalism wasn't severe enough to warrant shutting down whole stations, and that many stations are now shutting a full four hours early, at 8.00 p.m., indicating that their closures couldn't be for operational reasons."There was no reason to close stations and cause such huge inconvenience to local residents," Fan said. "They are choosing to close stations at 8.00 p.m., which is totally unnecessary.""Actually, they are imposing a curfew in all but name ... This is an attack on the civil and political rights of local people, and their freedom of speech," Fan said.He said the MTR should play the role of a public transportation body, and the public would have no problem with it."The MTR is only a target for the protest movement because it seems to be proactively working with the police to round up protesters," Fan said.Hong Kong police have made more than 2,600 arrests since the anti-extradition movement took to the streets in early June. More than 240 people have been arrested for violating a ban on mask-wearing in public, brought in by Lam last weekend under colonial-era legislation giving her administration emergency powers.The decision to invoke emergency legislation has paved the way for potentially draconian controls on every aspect of life and business in the city, as it allows the chief executive and ExCo to make new laws considered to be in the public interest, including ordering the inspection and control of publications, maps, photos, and communications and communications methods.Police can also be authorized to make arrests and detentions, deportations, to search and seize industrial goods and facilities, as well as implement controls and checks on goods under transportation, and to enter, search and confiscate private property.The power to control communications has sparked concerns that the authorities could also move to limit internet freedom, imposing controls and blocks that are similar to the Great Firewall that limits what internet users can see in mainland China.Lam has refused to rule out calling on the ruling Chinese Communist Party for help in dealing with protesters, who are demanding the formal withdrawal of a law enabling extradition to mainland China; an independent inquiry into police violence; an amnesty for arrested protesters; an end to the description of protesters as 'rioters'; and fully democratic elections to the Legislative Council (LegCo) and for the post of chief executive.Reported by Gao Feng for RFA's Mandarin and Cantonese Services. Translated and edited by Luisetta Mudie.

Don't fly white flag!
Never give up and surrender!
This breath and voice are for freedom!