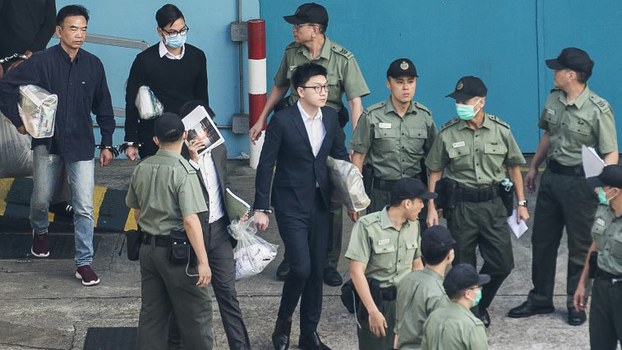 Pro-independence protestor Edward Leung (C) prepares to appear before Hong Kong's High Court, which sentenced him to six years in jail for his part in the February 2016 'fishball riots,' June 11, 2018.

A court in Hong Kong on Monday handed down a six-year jail term to Edward Leung, a prominent localist politician who advocated "separation" between the former British colony and mainland China, after finding him guilty of "rioting" during 2016 unrest in Mong Kok.Hong Kong's High Court also sentenced Leung's co-defendants Lo Kin-man and Wong Ka-kui to seven years, and three years and six months respectively for "rioting."

The Mong Kok riots, dubbed the "fishball revolution" on social media, flared up after a dispute between police and unlicensed food vendors in the gritty working class district, which was also the scene of clashes during the 2014 Occupy Central pro-democracy movement.Video footage of the riots showed a large crowd throwing bricks and other objects at riot police, who fought back with pepper spray and batons, injuring an unknown number of people. Others set fire to debris in the street, while business owners reported damage to property.Judge Anthea Pang said while passing sentence that "political pleas" could never justify violence. Leung, a by-election candidate for the localist group Hong Kong Indigenous at the time, said he went to the scene to try to act as a buffer zone in the clashes, but later admitted giving in to anger.He was also convicted of assaulting a police officer.Leung's sentencing drew harsh criticism from democracy activists and even the former colonial governor of Hong Kong, Chris Patten.Joshua Wong, a former student leader of the 2014 Occupy Central democracy movement, said Leung's sentence was "bizarre.""Edward Leung’s six-year sentence is the harshest imposed on an opposition activist since 1997, bizarre even in Hong Kong’s present era of political prisoners," Wong, who has himself been imprisoned on public order charges related to the 2014 civil disobedience movement, wrote."The verdict implies that one can be charged with ‘rioting’ merely for being present in an incident defined as a ‘riot’," he said.Politically motivated law enforcement

Former governor Patten also hit out at Leung's sentence as politically motivated, saying the former colonial administration had tried to tighten up public order legislation before the 1997 handover to China."We ... made a number of changes because it was clear that the vague definitions in the legislation are open to abuse and do not conform with United Nations human rights standards," Patten said in a statement issued by the Hong Kong Watch rights group."It is disappointing to see that the legislation is now being used politically to place extreme sentences on the pan-democrats and other activists," he said.Leung's defense attorney Edwin Choi said after meeting with his client after sentencing that he appeared calm, and was considering his options."Naturally, we have already analyzed the prison sentence for Edward Leung, and he is currently considering whether or not to appeal," Choi said. "The sentence was certainly no more lenient than our expectations."A lawyer for Lo Kin-man said he would definitely appeal against the sentence."We will appeal the sentence, and we are currently considering whether or not to appeal the verdict," barrister Lawrence Lau told reporters.League of Social Democrats (LSD) activist Leung Kwok-hung also said the sentences were intended to send a specific message."They want to make out that they were a rioting mob," Leung said. "That's why the sentences were so harsh."Civic Party leader Alvin Yeung said the Mong Kok riots had highlighted deeply simmering social tensions in Hong Kong, which the government has made little effort to address since."Even if we don’t agree with their tactics, what are the reasons behind young people’s dissatisfaction with society?" Yeung said.'Unacceptable crackdown'

Pro-Beijing politician Starry Lee said the sentences were entirely just, however."The rioters started fires and burned vehicles," Lee said. "Such lawlessness can't be judged leniently because we can't afford to send the message that it is OK for some people to use violence to undermine social order.""Incitement to violence cannot be taken lightly," she said.Fiona Bruce MP, who chairs the U.K. ruling Conservative Party's Human Rights Commission, said Leung's sentencing shouldn't be seen in isolation, however."It is only one of many examples of the Hong Kong government using the law to intimidate the pro-democracy movement and curtail freedom of expression," Bruce said.Bruce said one in three pro-democracy legislators and more than one hundred protestors have been prosecuted by the government since the Umbrella Movement of 2014."This is an unacceptable crackdown which has a chilling effect on the pro-democracy movement, forcing people into self-censorship and silencing opposition," she said in a statement issued by Hong Kong Watch.Hong Kong Indigenous was founded to campaign for "separation" between Hong Kong and mainland China, but Beijing has put pressure on Hong Kong officials in recent years to ensure that no one advocating greater independence or autonomy for the city can take part in public life.The group took part in the 2014 pro-democracy Occupy Central movement, which waged an unsuccessful 79-day civil disobedience campaign for fully democratic elections, although some later rejected its aims.Reported by Lam Kwok-lap for RFA's Cantonese Service, and by Gao Feng for the Mandarin Service. Translated and edited by Luisetta Mudie.