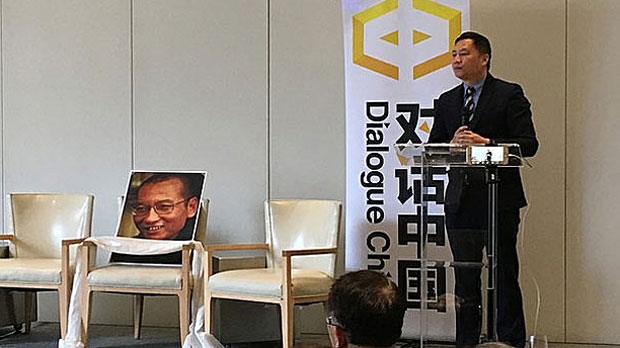 A former leader of the 1989 student-led democracy movement in China has announced plans set up a think-tank to research democratic reform in the country, on the 29th anniversary of the bloody military crackdown that ended weeks of protest on Tiananmen Square.

Wang Dan, a prominent veteran of the 1989 protests, called the think-tank focusing on a democratic transition for China as "the second major battle of my life," after his role in the Tiananmen Square protests, which were styled a "counterrevolutionary rebellion" by the ruling Chinese Communist Party.

Wang now lives in the United States after spending eight years on the democratic island of Taiwan, which had its own peaceful transition to democracy during the 1990s.

"Dialogue China won't just leave opposition ideas at the level of political slogans; it will do everything it can to turn them into concrete policies, systems and proposals," Wang said at the launch of the organization. "We will engage in a realistic analysis of contemporary China."

Wang has invited a number of prominent dissidents in exile to join him at the body, many of whom are from his own era of activism, but he has also extended an invitation to Joshua Wong, a student leader of the 2014 Occupy Central pro-democracy movement in Hong Kong.

However, the final appointments will be decided democratically, said Wang, who is now fund-raising for the venture.

"Ever since President Xi Jinping took power in 2012, shocking changes have been taking place in China," Wang said. "Internally, the Chinese Communist Party has regressed from being merely an authoritarian regime to a totalitarian one."

"Externally, China has begun to spread its own brand of political and economic ideology across the whole world," he said.

Wang said his new think-tank, to be called Dialogue China, will focus on researching ways in which China could achieve a democratic transition without losing stability.

It will do so by encouraging dialogue between different political viewpoints, he said, including those from Taiwan, Tibet, the northwestern region of Xinjiang, and Inner Mongolia.

He estimates he will need a year to raise funds, and plans to run "China salons" in New York, San Francisco, Vancouver, and Toronto to prepare for the think-tank's opening.

Joshua Wong told reporters that the think-tank is highly relevant to the political aspirations of many in Hong Kong.

"Our struggle for autonomy and democracy doesn't mean that our work here in Hong Kong is disconnected from other places, including the democracy movement in mainland China," Wong said.

"What's more, this could be an outlet for democracy activists in Hong Kong to engage in a mutual learning process with activists in other places."

Wong was unable to attend the launch in the U.S., however, as he is currently on bail pending an appeal, and has to abide by travel restrictions.

The death toll from the night of June 3-4, 1989, when PLA tanks and troops entered Beijing, opening fire on unarmed civilians, remains unknown to this day.

While the Chinese government once put the death toll at "nearly 300," it has never issued an official toll or list of names.

A 2009 map published by the Tiananmen Mothers listed more than 250 names garnered from confirmed eyewitness accounts and hospital records of those known to have died in the days after June 3.

Reported by Wang Yun for RFA's Mandarin Service, and by Fok Leung-kiu and Ma Lap-hak for the Cantonese Service. Translated and edited by Luisetta Mudie.