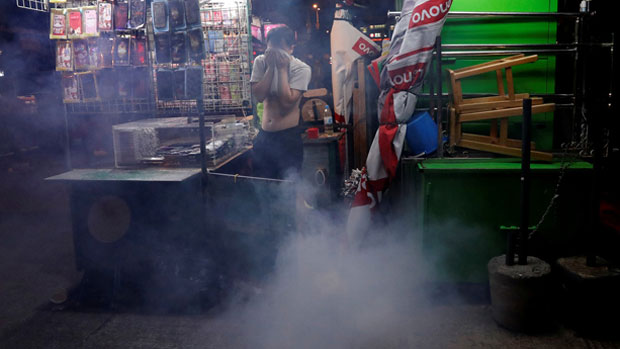 Community leaders in Hong Kong hit out at the city's police force on Thursday over the firing of dozens of tear gas canisters in Kowloon's Sham Shui Po district.

Police fired 35 canisters of tear gas and one rubber bullet in the streets of Sham Shui Po after protesters gathered there to burn spirit money bearing the faces of Hong Kong officials including chief executive Carrie Lam.

Residents said tear gas was unnecessary given that the streets were already mostly empty when riot police arrived to disperse protesters late on Wednesday.

Ronald Tsui, community director for the political party the Association for Democracy and People's Livelihood, said the use of tear gas in such a densely populated residential area was dangerous.

"Police have repeatedly ignored the safety of residents in the past and have applied a large amount of tear gas to the elderly," Tsui said, adding that children, including those with respiratory diseases like asthma, were at risk from the use of tear gas.

"We are aware that some members of the public are concerned about the use of tear gas in residential areas," he said. "I hope they understand that the police never wish to use tear gas or deploy any kind of force."

Tse said more than 170 police officers have been injured during anti-extradition protests that have gripped Hong Kong since June 9, and that a total of 748 people have been arrested in the protests since that date.

According to police, the nearby Sham Shui Po police station, a colonial-era building surrounded by high walls, barbed wire and guarded gates, has been attacked by protesters four times in recent weeks.

Police have meanwhile rejected an application by the Civil Human Rights Front to stage another mass march in support of the protesters' five demands.

These include the formal withdrawal of planned amendments to laws that would allow extradition of alleged criminal suspects to face trial in Chinese courts, an amnesty for arrested protesters,  an end to the description of protesters as rioters, an independent inquiry into police abuse of power, and fully democratic elections.

The march organizing group had planned to march from Victoria Park in Causeway Bay to the Chater Road pedestrian precinct in Central district, but police have only permitted a static gathering in Victoria Park.

"It would create chaos and even danger of a stampede so this decision is not only unreasonable but also dangerous for public safety," she told government broadcaster RTHK.

Meanwhile, speculation continues to mount over whether Beijing will deploy a detachment of People's Armed Police currently gathered a few kilometers away in the border city of Shenzhen.

A Chinese military commentator who gave a pseudonym, Li Feng, said the equipment shown in state-run media photos was evidence that a paramilitary force was prepared to enforce the law.

"If the other party uses barricades to block the road, this equipment can quickly push the obstacles away," Li said. "If they are facing a crowd, on the one hand, they can use the water cannon."

"[Such forces] would disperse crowds by means of deterrence and attack," Li said. "Of course, this will also involve carrying non-fatal violent equipment, which means beating people, to put it bluntly."

"The armored vehicles are equipped with a dozer blade at the front, which is typical disciplinary equipment; they even have a crane on board," Li said. "This is so that if there is something heavy blocking the road, and the bulldozer can't push it out of the way, then they can use the crane to lift it away."

"There is also lighting and broadcasting equipment, water cannons, camera forensics and a lot of canopy trucks of the kind used to transport troops ... it looks like they would have great strength of numbers," he said.

The vehicles and equipment were shown occupying Shenzhen Bay Stadium, only a 10-minute drive from the border with Hong Kong.

Chieh Chung, a research fellow at the National Policy Foundation on the democratic island of Taiwan, said the gathering of paramilitary forces in Shenzhen is intended to frighten and deter protesters.

But he said it didn't yet mean that Beijing has decided to deploy them.

"In the past when they have dealt with issues involving sovereignty, their leadership must make a big show of strength," Chieh said. "The Chinese Communist Party can't afford to be criticized for weakness or inaction."

Article 14 of Hong Kong's mini-constitution, the Basic Law, states that the Central Government of China is responsible for the defense of the Hong Kong Special Administrative Region, and that the Hong Kong government may, when necessary, request assistance from the People's Liberation Army to help maintain public order or to help with disaster relief work.

In Taiwan, a spokeswoman for the administration of President Tsai Ing-wen called on Beijing not to deploy force against anti-extradition protesters in Hong Kong.

"We don't recognize the description of this mass movement in Hong Kong as a 'riot' or a 'disturbance'," spokeswoman Kolas Yotaka told a regular news briefing in Taipei.

"Neither do we accept any repressive measures that involve harming the people of Hong Kong."

Reported by Gao Feng and Hwang Chun-mei for RFA's Mandarin Service, and by the Cantonese Service. Translated and edited by Luisetta Mudie.